Pink Rose Meaning and Symbolism in the Language of Flowers

The Meaning, Symbolism, and Cultural Significance of Pink Roses

Roses remain one of the most popular flowers to send as a gift today, despite the fact there’s a wider variety of flowers available than ever before. Thanks to selective breeding, roses bloom in almost every color of the rainbow and can be dyed for even more options. The color of the petals largely determines the meaning of the flower in modern symbolism. This guide will take you through everything you need to know the meaning and symbolism of pink roses in the language of flowers.

The Meaning & Symbolism of Pink Roses – The Essentials

In the language of flowers, pink roses carry the symbolic meaning of blossoming and tentative romantic feelings or first love in some cultures. In addition, a pink rose flower is also a symbol of success and confidence due to its warm color.

Pink Roses are from the same species as all other popular roses grown for cut flowers or landscaping. These species all belong to the genus of Rosa, with some of the most popular roses coming from species like Rosa rubiginosa, R. carolinae, and R. chinensis.

Roses can vary significantly in size and botanical features, including all the pink varieties. Some are only a few inches tall or climb on spiny vines, while others grow upright and produce blooms as big as softballs. There are even single-layered old-fashioned Pink Roses for a peony-style look.

There are Pink Rose varieties native to almost every part of the world that has a temperate climate and some tropical and arid areas. Choosing a type native to your location makes them easier to grow, but there is a wide range of varieties sold as cut flowers for adding spice and texture to a floral arrangement.

Pink varieties of Roses tend to grow in that color naturally rather than needing dyeing, including some multi-colored and striped varieties. Open and single-layered types tend to feature a white or yellow center that contrasts against the pink colors of the petals. Some of the most popular varieties include:

The Meaning, Symbolism, and Cultural Significance of Pink Roses

There’s a whole world of meaning to explore when it comes to Pink Roses, starting with their color and ending with their use as a tattoo symbol.

The General Meaning of Pink in Floral Arrangements

Pink flowers are a popular color for floral arrangements with a positive or playful message. In color theory, it’s believed to represent femininity, softness, playfulness, joy, and pleasant emotions. For flowers specifically, pink is considered to symbolize:

Greek and Roman Myths for the Pink Rose

In Greek mythology, Roses, in general, were created by the sea foam that splashed on the shore when Aphrodite was born from the sea.

Pink Roses, in particular, have their own unique story in the myths of Roman culture. Rhodanthe was a beautiful woman that had too many suitors, and she fled into the temple of Diana looking for safety. The goddess turned her into a Pink Rose, and the suitors that pursued her into the thorns of the plant.

Both of these stories helped associate this bloom with attraction and potential romantic entanglement.

Roses are sometimes associated in Christianity with the blood of Christ. Some myths say the Rose was originally white and turned red after the blood dripped on them during the crucifixion.

The particular variety of roses associated with this belief is the Moss Rose or Portulaca grandiflora. It comes in many intense pink varieties and standard white and red types.

Pink Rose Meaning in the Victorian Language of the Flowers

Roses were widely cultivated in Victorian England, both species native to Europe and imported types from around the world. This meant that not only did the plant have a general association with romance in the culture, but each color had its own meaning in the Language of Flowers.

The Pink Rose was considered a sign of first love or budding feelings for someone. It was also a symbol of innocence, childhood, and healing from illness.

What’s more, pink roses were often used as decorations on romantic gifts or early cards for Valentine’s day, more often than Red Roses during this era.

Pink Roses get their own separate meaning in the Hanakotoba or Japanese Language of Flowers. They’re known in Japanese as Momirobara.

In this culture, they don’t carry any romantic or related meanings. Instead, you give them to wish for happiness or to express a deep trust in someone you know.

It’s a good choice for sending to friends or family members who have supported you or need your support. Sending Pink Roses in Japan can also signal you have confidence that someone will succeed.

Pink Rose as a Birth Flower

The Pink Rose is the birth flower of the month of June. This lends it a playful and warm meaning due to its association with the beginning of summer.

Many pink varieties of the Rose also begin to bloom around May or June, making it a botanical association as well.

National Flower of the United States

Roses are considered the official National Flower of the United States. This includes Pink Roses and all the other colors available. The Rose is also the state flower of New York, with no particular focus on pink blossoms but not excluding them either.

As state flowers, both North Dakota and Iowa consider the wild Prarie Rose their state flower. This is a dusty Pink Rose with a charming appearance and scent.

National Flower of the Republic of Maldives

A variety of the Pink Rose, also known as Rosa polyantha, is the National Flower of the Republic of Maldives. It’s not native to the islands, but it is one of the few true Rosa species that can grow in the warm conditions and sandy soil there.

The bright pink color is considered a sign of the hope and resilience of the people living there and can be spotted in gardens throughout the islands.

Pink Roses are popular as a tattoo today, as are many other flowers. Most people that seek out floral tattoos are interested in a feminine design that carries its own symbolism and meaning.

The Pink Rose is often used to commemorate a first love or a lost love that was only just developing. Some people also use them to remember children or young people in their family that passed away before reaching adulthood.

For others, Pink Rose tattoos help remind them of caring female family members like a mother or grandmother that raised roses.

In Japan, Pink Roses are commonly gifted to others to congratulate them for success or to communicate that you are confident in their success.

In Western cultures, Pink Roses are often gifted to romantic prospects or partners that have only recently started a relationship. Sometimes these Roses are included in bouquets for young children or for women of any age due to their connection with youthfulness and femininity.

Some people use them as gifts to symbolize friendship, contrasting with the romantic associations with Red Roses.

What does a pink rose symbolize?

Depending on the culture, a Pink Rose can mean anything from confidence to romantic feelings to playfulness and positivity. Pink Roses are often associated with the start of a relationship or a first love as well.

Pink Roses can be considered lucky or a symbol of success in some cultures, including in Japan.

Is a pink rose a flower of love?

It depends on the culture in which you send the flower. In most Asian cultures, pink is connected more with vitality and good health than with romance. Some Western cultures consider it a sign of romantic intentions.

What do pink roses mean in a relationship?

Once you are in a relationship, Pink Roses can symbolize your joyfulness at being their partner or your hope for positivity in the future. They also indicate a shy sort of romantic declaration.

Most Pink Roses last about one week after being cut, as long as the water they are in is changed daily.

The Meaning of Pink Roses – The Final Word

Pink Roses can be romantic, but more often than not, they symbolize general positivity and happiness. They’re even considered a good luck charm by some. Consider the background and culture of the person you want to send a Pink Rose to determine what kind of symbolism they might read into it. 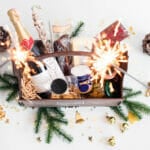 18 Best Gift Baskets in San Diego (For Every Occasion) 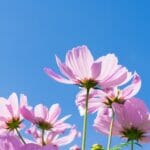 How Much Sunlight Do Cosmos Flowers Need?