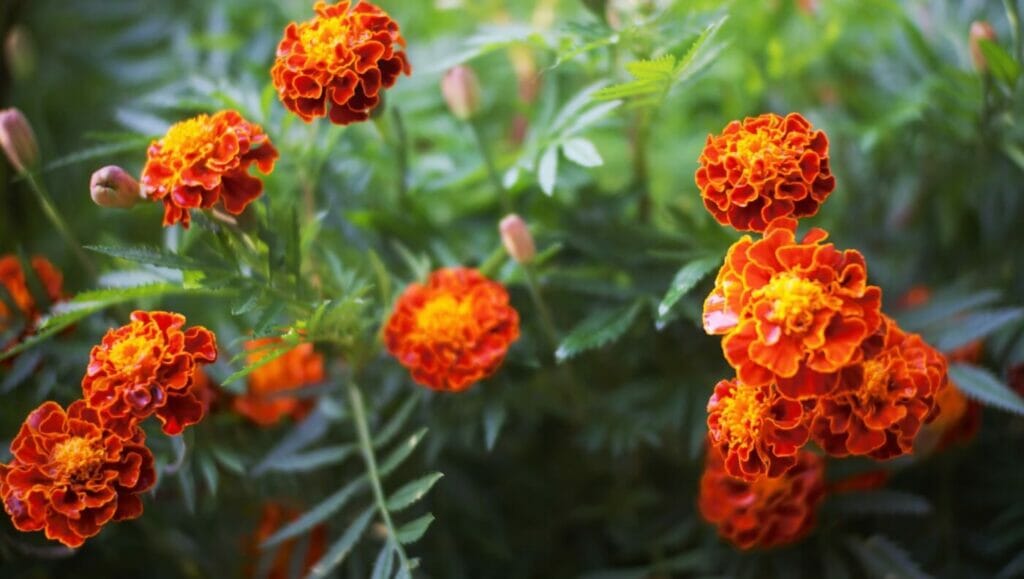 When Are Marigolds In Season? (Essential Guide)

Everything You Need to Know About When Marigold Flowers Bloom

The Marigold season is one many gardeners, especially vegetable gardeners, look forward to. These bright and fiery flowers pop up from late spring and stick around till fall for a stunning colorful display and offer lots of added uses and benefits and symbolic value. In this article, we’ll discuss the ins and outs of the Marigold flowering season, including tips on making bloom time last as long as possible.

When Are Marigolds In Season? – The Essentials

Marigolds generally flower from late spring to fall, stopping just before or at the season’s first frost. Exact times depend largely on species and the chosen cultivar within that species. Planting in containers, deadheading, and providing the proper care all impact the length of the season, as well as climate and planting time.

Marigold is the common name for the genus Tagetes, containing several species popular in home gardens. This common name is also shared with the Calendula genus, known as Pot Marigolds. However, despite sharing a name, they are not the same plants and have different requirements.

The Marigold genus is split into several popular species, the most common of which are:

Within each species, there are several cultivars – some of which have been in cultivation for more than 100 years. There is variation in marigold flower colors and shapes and overall plant size, ensuring there is a suitable option for every gardener. Many also work amazingly well as cut marigold flowers for vase and bouquet arrangements.

Marigolds are part of the second-largest plant family – Asteraceae. It is also known as the Sunflower or Aster family and includes over 32 000 species of plants.

Each species of Marigold is native to a particular region, generally spread across the western hemisphere. They reside in warmer areas from the South of the USA and through Central America, well into South America.

Common names like French and African Marigold may make gardeners believe the species comes from that region. However, the common names are actually related to where the particular plant naturalized or became popular rather than their area of origin.

Marigolds are usually grown as annuals, planted in USDA Zones 2-11. Some species are also grown as short-lived perennials in warmer zones. Save the seeds and replant the following season to continue enjoying the blooms each year.

When Are Marigolds in Season?

The Marigold season extends from late spring to fall. It varies depending on type and cultivar, but you can generally expect most types to flower continuously throughout summer.

When planted early, some quick-growing types can produce blooms in late spring. Others will start flowering in early summer, with most blooming until early fall. They will stop flowering when temperatures dip, not appreciating cold weather, dying back after the first frost.

How Long Does The Marigold Season Last?

The flowering period again depends on the species and cultivar. Most will bloom for a solid three months during summer, sometimes more if the conditions are right. No matter when they were planted, they will die back at the first signs of frost, so the period largely depends on planting time.

African Marigolds take slightly longer to mature than other species. Unless they started indoors before spring, they usually have a shorter season overall. However, French and Signet Marigolds can stop flowering at the height of summer in warmer regions due to the excessive heat, while African Marigolds withstand higher temperatures much better.

As mentioned, planting time has a significant impact on the flowering season. French and Signet Marigolds can be planted from seed as soon as the ground warms and will generally bloom in about two months. When planted early, the season will be longer than if they are planted in late spring or even early summer.

When it comes to African Marigolds, it’s best to start from young plants bought from a nursery if you’re looking to extend the season. These are prepared in greenhouses for planting as soon as the weather is warm enough, giving you blooms as quickly as possible.

Alternatively, start your own seeds indoors 4-6 weeks before the last frost date. This will have the same effect as buying existing plants from a nursery when cared for correctly.

Climate also plays a significant role in the length of your season. If the last frost date is later into spring, you will only be able to plant them out later in the year, shortening your season. In regions where spring weather warms almost immediately, you may have blooms as soon as late spring.

The first frost date in fall also has an effect. Marigolds die back as soon as the weather dips and stop flowering when temperatures drop too low. It takes longer for this dip to occur in warmer regions, extending the season as long as possible.

You can manipulate conditions to extend the season for those planting in containers. Keep them indoors in early spring overnight to prevent frost damage and do the same in fall until the plant stops flowering. This will give you the most extended blooming season for that type.

Give these plants the proper care and deadhead regularly to encourage prolific flowering for as long as possible. Marigolds require full sun, sufficient watering, and slightly acidic soil to truly thrive so ensure you are planting in a suitable location in your garden as well. It can also be prudent to fertilize your marigold plants for optimal growth and vibrant blooms.

The exact length of the season is, first and foremost, decided by your chosen marigold species and cultivar. Some start blooming in early spring, while others wait for summer to set in. Some will last until the first frost, while others stop blooming as soon as the warm weather is over.

These popular cultivars will give you an idea of blooming seasons, but it’s essential to check your specific type to exact periods.

When compared to other flowering plants, Marigolds have a pretty long flowering season. With the proper care and regular deadheading, you can extend those blooms as long as possible. 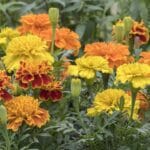 When and How to Fertilize Marigolds (Essential Guide) 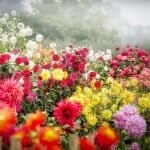