Marigolds are one of the most popular annuals around the world. They’re prized for their symbolic value and offer the ornamental gardener a host of uses and benefits. While growing and caring for marigolds is relatively straightforward, ensuring you plant your marigolds in suitable light exposure is key to their success. This guide covers Marigold’s sunlight requirements to help you get the most out of your plants. 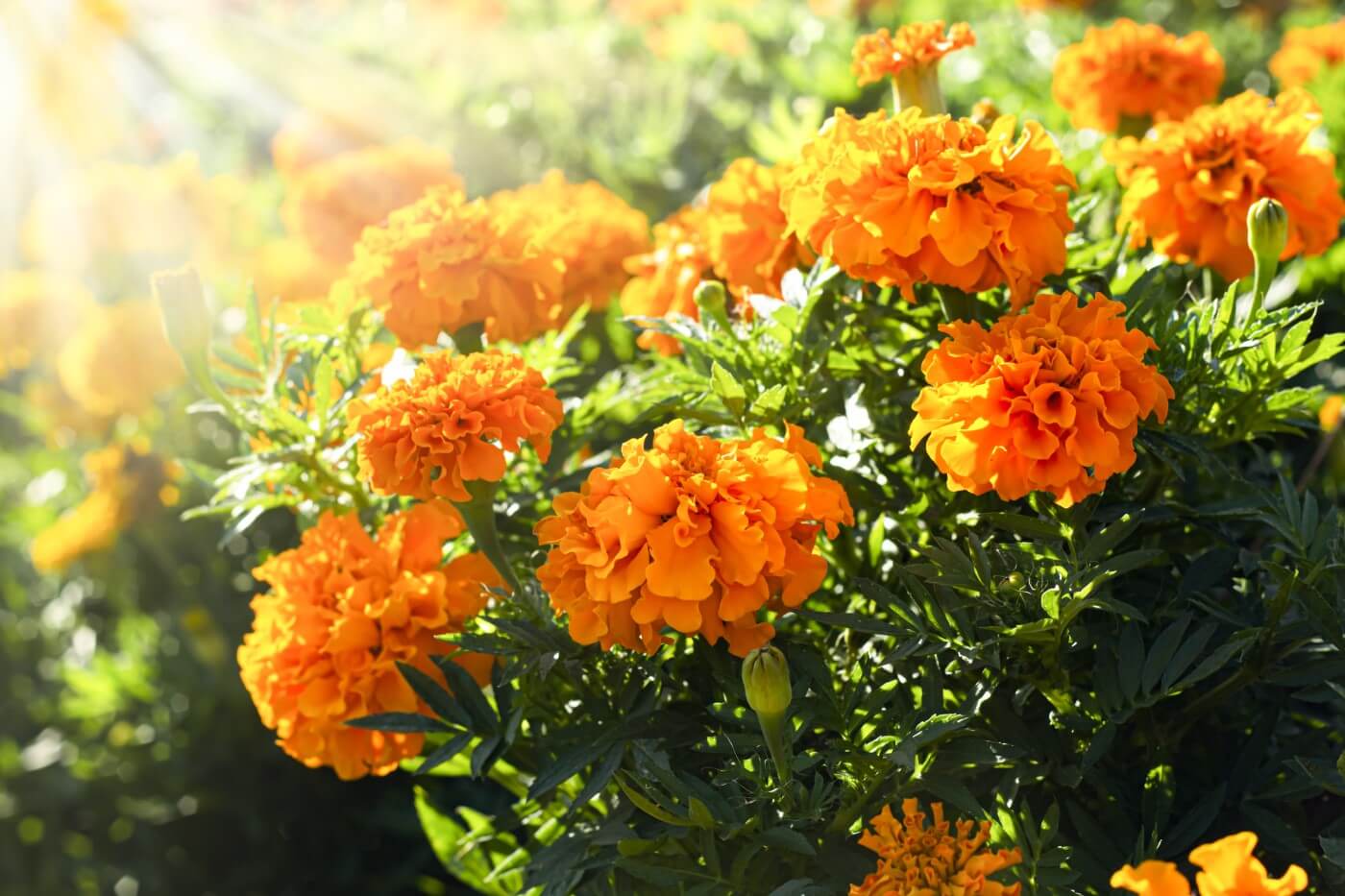 How Much Sunlight Do Marigolds Need? – Essential Tips

Marigolds require a full day of sun to grow and flower their best. At least six hours is recommended, but eight hours is preferable. They only tolerate shade in the early stages of growth, needing full sun once they have grown a few inches tall. If you don’t have an ideal position, plant in pots and move them around during the day to make the most of the sunlight in your garden.

Scientifically known as Tagetes, the Marigold genus is packed with more than 50 interesting species. Some have the classic Marigold appearance we recognize, while others look like entirely different plants. But, they are all closely related.

These plants have been grown in home gardens for more than 100 years. They first rose to popularity in the 16th and 17th centuries when Spanish explorers brought seeds back to Europe from the Aztecs. Beloved for their stunning flowers and many uses, they became an annual garden staple, spawning many new cultivars and hybrids. Cut marigold flowers are also a popular addition to vase arrangements and bouquets.

As part of the large Asteraceae family, they are related to thousands of common garden plants, including Asters, Dahlias, and Sunflowers. The Aster family features an impressive 32 000 species, the second largest plant family after Orchidaceae.

These plants are commonly confused for another member of Asteraceae – Calendula. That’s due to the sharing of their common name. While the entire Tagetes genus is called Marigolds, Calendulas are known as Pot or Scotch Marigolds. Despite the shared name, they are entirely different plants.

Beloved by the Aztecs, Tagetes are native to continents in the western hemisphere. Most species are located in Central and South America, but others travel as far up as the South of the United States. They love the warmth in these areas and salute the summer with their fiery marigold flower colors.

Different species have different origins, but most have become naturalized worldwide. Some may assume the common names attributed to some species are related to their origin, such as the French Marigold. However, these common names are generally associated with where the plant naturalized or became popular rather than the actual area of origin.

For example, the British named the African Marigold (also known as the American Marigold or Aztec Marigold) after coming across them in North Africa. But the species Tagetes erecta is not native to Africa. It became naturalized after European traders and explorers spread it.

Despite these origins, Marigolds are known to grow happily in gardens worldwide without fuss. As an annual, they can be grown in USDA Zones 2-11 and pulled from the garden once frost sets.

While most species are considered wonderful companion plants for their many benefits and friendly nature, there are species considered invasive in some regions, such as Tagetes minuta. Make sure you know exactly what species you are dealing with before planting.

To produce their dense leaf growth and plenty of flowers, Marigolds require a full day of direct sunlight. At least six hours is needed, but closer to eight is better for prolific blooming. In warmer regions, they may get by with as little as five hours, but more light is recommended.

Marigolds are not accustomed to growing in the shade and won’t grow well under trees or in the shadows of other plants. It’s essential to take the orientation of your garden into account, especially when planting next to veggies that climb up trellises, to stop them from becoming shaded by nearby growth as your bed fills out.

These plants can only handle partial sun in the early stages of growth. Small seedlings may benefit from some sun protection, planted in trays indoors or in a greenhouse. But, once they grow more than a few inches tall, they need the full day of sun to develop properly.

If your Marigolds don’t get enough light, the leaf growth will become leggy, and the plant will not produce many flowers if any at all.

Best Locations in the Garden

Marigolds have many uses, often planted in vegetable gardens as a trap crop or pest repellent or in ornamental flowerbeds for their stunning summer flowers. No matter the use, position the flowers in a south-facing bed without overhead shading to make the most of the direct sun.

If using as a border, edging, or companion plant, take note of the growth of the plants around your Marigolds. Some veggies may be short when planted, but fill out to become towering edible features in the summer. If your Marigold is planted on the wrong side of the taller plants, they will be shaded for most of the day and will struggle to flower.

Ensure they are planted in well-draining soil and away from areas where water collects after rain to prevent root rot.

If you don’t have a full sun area of your garden available for planting, you may wonder if there is any way these plants can handle part shade. Unfortunately, they have no tolerance for lower light conditions and simply won’t flower if they don’t get enough sun.

The best option, in this case, is to plant your Marigolds in containers. With well-draining soil and a large enough pot for your chosen variety, Marigolds make wonderful container plants and bloom prolifically throughout their flowering season.

Planting in pots allows you to move the plants throughout the day to the correct position, taking advantage of the sunlight to provide the minimum of 6 hours of direct light required.

Dwarf Marigolds are most suitable for containers as they require smaller pots, making them easier to move around during the day. Watch the sun’s movement on your balcony or patio, leaving the pot in the perfect position in the morning and afternoon to make the most of the light. It may also be prudent to consider fertilizing your marigolds to provide an added nutrient boost to support growth and vitality.

The intensity and path of the sunlight will differ according to your region. Maps like SunCalc help you better understand the sunlight in your region at specific times, allowing you to choose the best position for your Marigolds.

If the light intensity in your area is lower, or if you live in a climate with cloudy and rainy summer weather, the correct position is even more important. Eight hours of sunlight per day or more are recommended in these regions to help your plants grow to their full potential.

The season can also affect light intensity and direction. While it doesn’t impact where you place your Marigolds (full sun is always the goal, no matter the season), it can affect growth and blooming time.

Those living in cooler regions will see their Marigolds bloom slightly later in spring or early summer, while those in warmer regions will enjoy the flowers far sooner.

Come to the end of the season, you’ll want to consider cutting back your marigolds in preparation for the following spring.

Different species of Marigold have the same general requirements, but some are more tolerant of heat and intense sunlight than others.

African Marigolds love higher temperatures, while French Marigolds are a bit more sensitive. Due to their delicate petals, Signet Marigolds can also struggle in intense heat.

Make sure to choose the suitable variety for your garden and keep them well-watered to limit heat stress.

These annuals are sun lovers, needing at least six hours of direct light per day to thrive. Luckily, if you can’t find the right spot, you can always plant in containers to enjoy the blooms through summer. 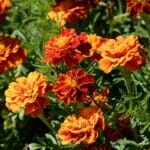 When Do You Cut Back Marigolds? (Essential Guide) 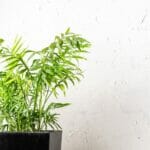 When and How to Repot a Parlor Palm (Essential Tips)