The ivy plant’s glossy leaves and flowers appear throughout history, climbing through the myths of ancient Greece and the divine tales of the Druids and up the walls of the world’s most exclusive educational institutions. These evergreen vines grow quickly, reaching up to 100 feet and blooming with white, green, and yellow flowers. A European native, ivy is grown as a houseplant and ornamental in temperate climates worldwide. Here we’ll take you through everything you need to need about ivy flower meaning and symbolism, their rich history and origins, uses and benefits, and cultural significance today. 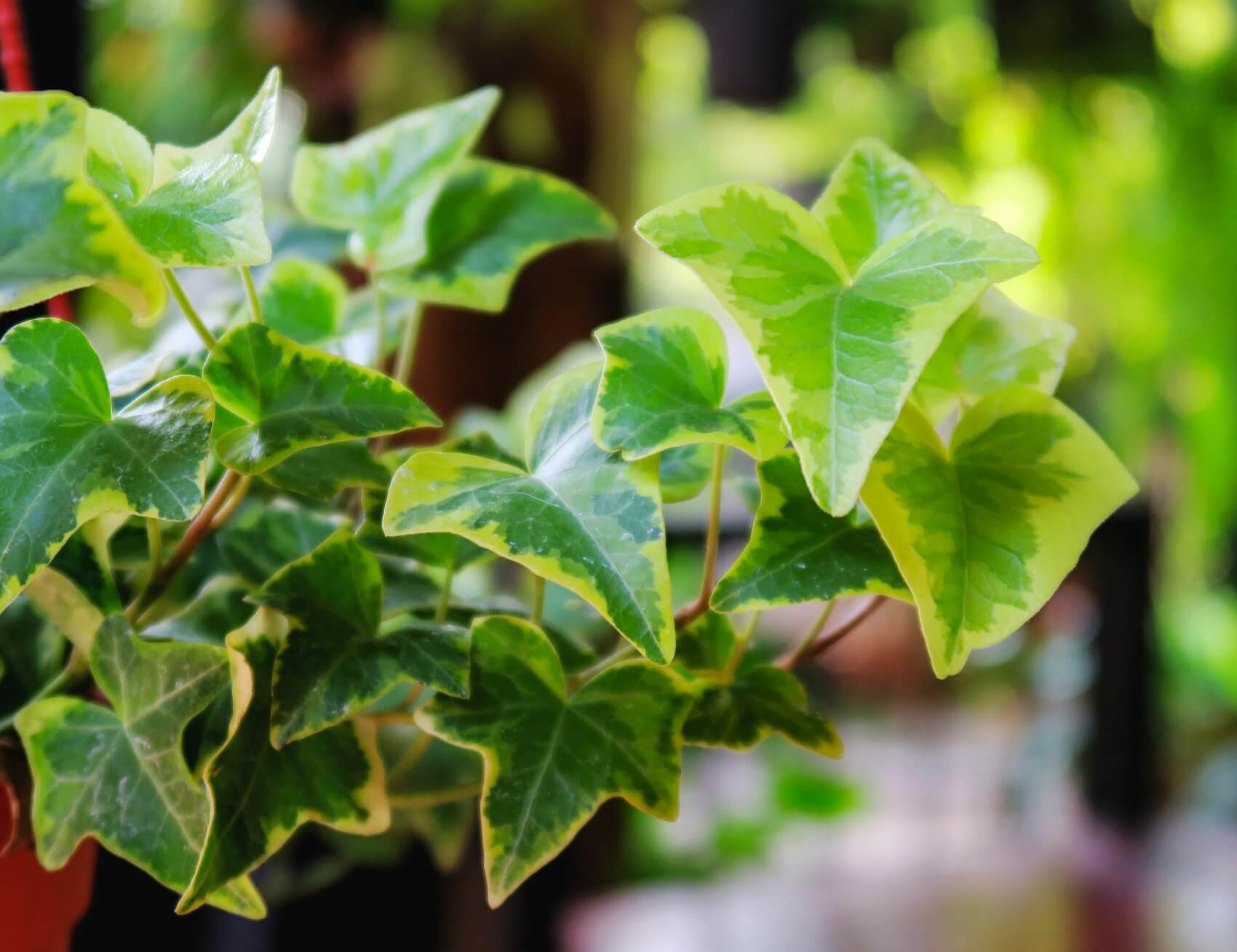 Ivy flower meaning in the language of flowers, has a long-held symbolic association with fidelity, marriage, and friendship. The Greek god Dionysus and the Roman god Bacchus held ivy’s flowers and deep green leaves as sacred. To the Druids, ivy plants symbolized female divinity. Today, these quick-growing vines adorn the walls of institutes of higher learning, providing them with an instantly recognizable symbolic moniker.

Ivy plants belong to the Hedera genus, which is a member of the Araliaceae family. The ivy genus contains about 15 species, which are categorized by the type of outgrowths they have under their foliage. Commonly cultivated species include English ivy (H. helix) and Algerian ivy (H. algeriensis).

The Hedera genus comprises woody evergreen plants that may climb, vine, or creep across the ground, depending on the variety. The foliage ranges from dark green and shiny, to variegated white, gold, and green.

Ivies have different foliage shapes throughout their lifespan. Young leaves are alternate and simple, with three to five lobes. Adult leaves are ovate or rhombic.

Ivy flowers bloom in shades of green, white, or yellow blossoms. Flowers have five petals and a slightly spicy scent. Blossoms are followed by blackish berries.

The Latin term Hedera comes from the Greek for “to get” or “to grasp.” In translation, Hedera loosely means “the clinging plant.”

What Regions are Ivy Native To?

Ivy grows across regions of Europe, Asia, the Middle East, and Africa. For instance, H. helix is native from Scandinavia to Russia and is believed to come from the Caucasian Mountains.

H. algeriensis/canariensis is native to the Canary Islands of North Africa, while H. colchica stems from northern Turkey and the western Caucauses. H. rhombea is native to the temperate regions of east Asia, while H. nepanensis comes from the Himalayas.

When is Ivy in Season? When Does Ivy Bloom/Produce Flowers?

Most varieties of ivy bloom in fall or early winter. For instance, H. hedera produces yellow, white, and green flowers in fall, followed by clusters of berries. H. algeriensis/canariensis, however, may bloom in summer or fall.

There are about 15 recognized species in the Hedera genus. Of these, English ivy (H. helix) is among the most common species found in landscapes and floral gifts.

Other ivy species include Algerian or Canary Island ivy (H. algeriensis/canariensis). This evergreen may be grown as a vine or a ground cover. The underside of its foliage and stems has a reddish cast.

Bullock’s heart or Persian ivy (H. colchica) is a vine that grows to 40 feet. It has heart-shaped leaves and adheres to surfaces using aerial rootlets. The cultivar ‘Dentata’ has variegated white and green foliage.

Nepal or Himalayan ivy (H. nepanensis var. sinensis) has gray-green foliage and showier flowers than most ivies. In the wild, it grows up to 100 feet. Japanese ivy (H. rhombea) has green, variegated foliage with red and purple stems.

Uses and Benefits of Ivy Flowers

Ivy in Herbalism and Medicine

English ivy has long been prized for its medicinal properties. In Ancient Greece, the physician Hippocrates treated intoxication and swelling with ivy; he also used it as an anesthetic.

In folk medicine traditions, ivy leaves are used to treat rheumatism, joint pain, and swelling. Herbalists have long used ivy to treat whooping cough, bronchitis, and dysentery. Ivy leaves have also been used as a poultice for skin disorders, sunburn, and scabies, and to repel lice.

Recent research indicates that H. hedera foliage and twigs have anti-inflammatory, antiseptic, antifungal, anti-microbial, and emetic properties. Ivy can also act as a stimulant and vasoconstrictor.

Medical applications of H. hedera include:

When taken in large doses, H. hedera may harm red blood cells, and cause irritability or intestinal distress.

Ivy in Food and Drink

Adding Hedera to food and drink isn’t recommended, as it can be toxic when ingested.

While ivy flowers aren’t showy, bees are attracted to the small blossoms. There’s even a bee that’s named for its attraction to ivy.

Butterflies, wasps, and flies are also attracted to ivy. Birds such as starlings, jays, and cedar waxwings eat the berries that follow ivy blossoms.

Are Ivy Flowers Toxic to Humans and Animals?

When ingested, ivy is toxic to pets and humans. The plant contains compounds known as triterpenoid saponins that, when ingested, may cause abdominal pain, vomiting, irritation, and hypersalivation. Hedera plants also contain skin irritants that can cause contact dermatitis, itching, and rash.

The Meaning, Symbolism, and Cultural Significance of Ivy Flowers

To the Ancient Greeks and Romans, ivy was a sign of divinity. Dionysus — the Greek god of wine (known as Bacchus to the Romans) — wove ivy leaves into his wreath. The Greeks believed that wearing ivy leaves on the forehead would prevent inebriation.

To the Druids, ivy plants symbolized female divinity. Later, Christianity morphed this belief into a symbol of the Virgin Mary, as in the British Christmas carol “Holly and the Ivy.”

Ivy’s clinging habits, and long-lasting foliage that stayed green through the cold winters led medieval Europeans to use the plant as a symbol of fidelity in marriage. It was often gifted to newlyweds and newborn babies.

To early Christians, evergreen ivy also symbolized the eternal life of the soul. This connection can be seen in paintings such as Lorenzo Lotto’s Venus and Cupid.

During the Romantic era of the late 1700 and early 1800s, artists often depicted gothic ruins covered with clinging ivy. Examples include Visitor to a Moonlit Churchyard and Netley Abbey by Moonlight.

In the U.S., the eight exclusive universities are known as the “Ivy League” are thought to be named for the vines growing up their storied walls. Many poems and novels use the term, such as Salinger’s Catcher in the Rye.

Ivy symbolizes fidelity, making it an appropriate inclusion in a wedding or anniversary floral gifts. As ivy also symbolizes the staying power of love and friendship, it can be used in arrangements and bouquets for friends and loved ones.

How to Care for Fresh Cut Ivy Flowers at Home

Place bouquets or arrangements away from windows, drafts, and heating vents. If you want to keep the ivy for use later, store it in a plastic bag in the refrigerator.

With its shiny, attractive foliage, ivy makes a lovely addition to bouquets and arrangements. In the landscape, Hedera attracts pollinators and feeds birds in the winter, while adding year-round color and texture. Ivy’s evergreen, clinging nature makes it a natural symbol of fidelity, love, and friendship.

What does the Ivy symbolize?

Ivy flower meaning in the language of flowers has a long-held symbolic association with fidelity, marriage, and friendship.

Is it unlucky to have ivy in the house?

In times past, ivy brought indoors was considered an omen of impending bad fortune. In practical terms, Ivy is considered an excellent air purifying plant and thrives in a range of living environments.

Does Ivy have a flower?

All ivy plants will produce flowers once they reach a mature stage in their growth cycle. Most varieties of ivy bloom in fall or early winter.

Does all Ivy climb?

All ivy plants will clamber across or climb dependent on an appropriate adjacent structure for the foliage to latch onto. 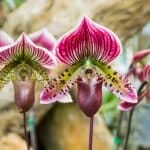