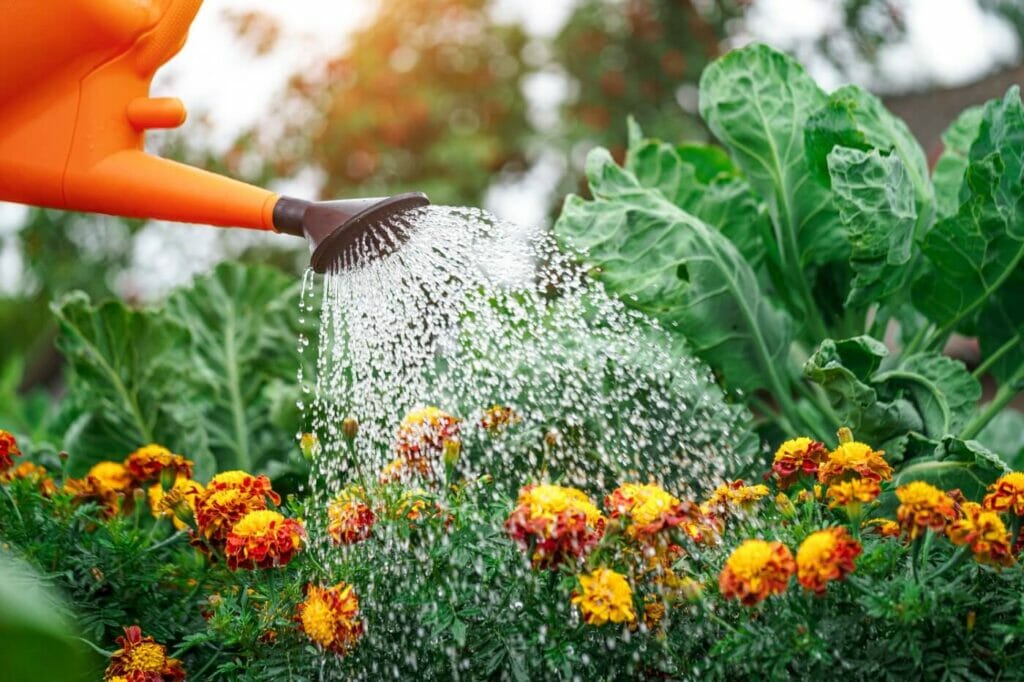 When And How To Water Marigolds (Essential Guide)

Everything You Need to Know Watering Marigold Plants at Home

Tagetes are not demanding garden plants, which is just one of the reasons why so many gardeners love them. Not too thirsty, they are happy to be watered regularly along with other ornamentals in your garden. They don’t require special attention and are tolerant of a missed watering or two. Follow this guide to find out when and how to water Marigolds to keep them happy and blooming all season long.

When And How To Water Marigolds – Essential Tips

Marigolds need moist soil for the first week or two after planting to establish a strong root system. Once established, they require watering around once per week and more often in summer when temperatures are high. Avoid overhead watering to stop the dense blooms from rotting and to prevent fungal growth on the leaves.

There are a few plants with the common name Marigold, derived from Mary’s Gold. However, the genus of plants classified as true Marigolds is Tagetes, while Calendulas are known as Pot Marigolds or Scotch Marigolds.

This genus contains many species – more than 50 in fact – but only a few are common in cultivation. Each of these species has its own common name related to where they became popular or where naturalized throughout history:

Marigold varieties are part of the second-largest plant family, Asteraceae. This family contains many popular ornamental plants, including Sunflowers, Dahlias, and 32,000 other species of plants.

Predominantly native to South America, Marigolds are native to warmer regions in the South of the United States, through Central America and beyond. They were grown by the Aztecs (leading to the other common name for Tagetes erecta, Aztec Marigold), spread to Europe by Spanish explorers in the 16th and 17th centuries.

Some species naturalized in the Mediterranean and North Africa, while others took to the cooler regions of central Europe. These symbolic marigold plants maintained their popularity to this day, grown around the world as wonderful standalone or companion plants, and are available in a variety of brilliant colors.

The Importance Of Watering Correctly

Water plays many roles in plant health and is vital for survival. Like humans, plants are made up of a large percentage of water, so giving them the right amounts is key to preventing many common Marigold problems like wilting or yellowing.

Water is one of the main components of plant cells, filling them and giving them shape. It is stored in these cells to be used by the plant, providing structure and helping the plant stay up straight.

Water is also the way nutrients get transported to parts of the plant that need it. Nutrients remain in the soil, drawn up by the roots through the water as needed. Without water, the plant wouldn’t be able to absorb any nutrients, causing deficiency and stunted growth (for more, see our in-depth guide to fertilizing marigolds).

And finally, photosynthesis wouldn’t be possible without water. The leaves, fuelled by energy from the sun, use water and carbon dioxide to convert into food for growth.

When To Water Marigolds

The first time to water is immediately after planting. This encourages the roots to grow further into the soil and removes any large gaps of air that can dry out parts of the plant. Within the first week or two, it’s best to keep the soil moist until the roots have established, anchoring the plant in the soil.

After that, Marigolds don’t need water very often and are happy with a deep and slow watering around once a week. If spring or summer is rainy in your region, they may even be able to survive on rainwater alone.

While establishing, moist soil is preferred to encourage new root growth. After about two weeks of growing, you can limit this watering when the plants have settled. These plants don’t like to be waterlogged and prefer their soil to dry out before the next watering.

Potted Marigolds are slightly different as there is only so much moisture the soil can hold. Rather than waiting a week to water, keep an eye on the soil and water when the top two inches have dried out completely.

Environmental changes with the seasons should lead to a change in your watering routine.

Keep a close eye on your plants rather than watering on a strict schedule. Use your gardeners’ intuition and a quick test with your finger to figure out when is the perfect time to water.

How To Water Marigolds

Always water around the base of the plant and not over the leaves and flowers. Water can get trapped in the dense blooms and around the leaves, resulting in rotting and fungal growth. Installing drip irrigation is the easiest way to avoid overhead watering and ensure your plants get exactly what they need.

The first sign of an underwatered Marigold is wilting. The once strong leaves will begin to bend over and shrivel up in an attempt to conserve what little moisture there is left in the plant.

Left underwatered, the plant will stop flowering due to stress, and any existing flowers will begin to wilt. Heavier blooms may drop off the plant, and buds will fail to open.

Slowly, the leaves will begin to turn yellow, turning brown over time. These brown leaves will be dried and crispy, not returning to their previous bright color after watering. Ultimately, the entire plant will turn brown, and the roots will die, unable to come back to life (for more, see our in-depth guide to pruning and cutting back marigolds).

Watering regularly once a week will prevent any issues with underwatering. If you happen to forget and notice leaves starting to wilt, water deeply and slowly immediately, and the leaves should return to normal. If the plant is too far gone, it’s best composted with new late-season Marigolds planted to replace them.

If your Marigold is left in waterlogged soil, either due to overwatering, excessive rain, or lack of drainage, wilting will also occur. However, this will be accompanied by mushy stems and leaves, especially near the base of the plant.

Leaves will start to yellow at the base, traveling upwards as the soil remains moist. Below the soil, the plant’s roots will begin to rot and go soft, unable to draw up any water or nutrients. Growth will become stunted, ultimately killing the plant.

If you have severely overwatered your plant leading to root rot, there isn’t much you can do to save it. You can try pulling the plant, trimming the roots, and replanting, but due to their short flowering season, these annuals are unlikely to recover in that amount of time.

Prevention is key when it comes to overwatering. Make sure the soil drains well and that the planting area does not collect large amounts of water after rain. Plant in full sun to ensure high evaporation levels and never water when the topsoil is still moist.

How to Water Marigolds FAQ’s:

What are the common signs a Marigold needs water?

Wilting, arching stems, and drooping flowers all indicate the plant is in need of water. Make sure you water at least once a week and more often in summer when temperatures are high.

Should I avoid the leaves when watering?

Keep water off the leaves and blooms to prevent rotting and fungal growth. Drip irrigation is the easiest way to avoid overhead watering.

What should I do if I overwater?

Leave the soil to dry out completely before watering again. If the plant does not recover, pull it and replace it with a late-season Marigold to finish out the season.

Marigolds are not difficult plants to care for. A simple watering once a week once established is enough to keep them happy for the rest of the season, with an extra drink when the weather gets warm. 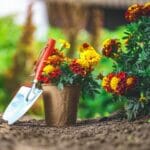 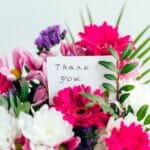 14 Best Types of Flowers to Gift for Thank You Gestures