Long a herald of spring, the fragrant cowslip (Primula veris) blooms with sunny yellow blossoms. This perennial is easy to grow in the landscape, where it blooms early and profusely. In its native Europe, it’s long been prized for its medicinal and culinary uses. In the language of flowers, the cowslip stands for grace and comeliness, making it a welcome addition to floral gifts for loved ones. Here we’ll take you through the origins and history behind Clowslip flower meaning, plus learn about their uses, benefits, and cultural significance today. 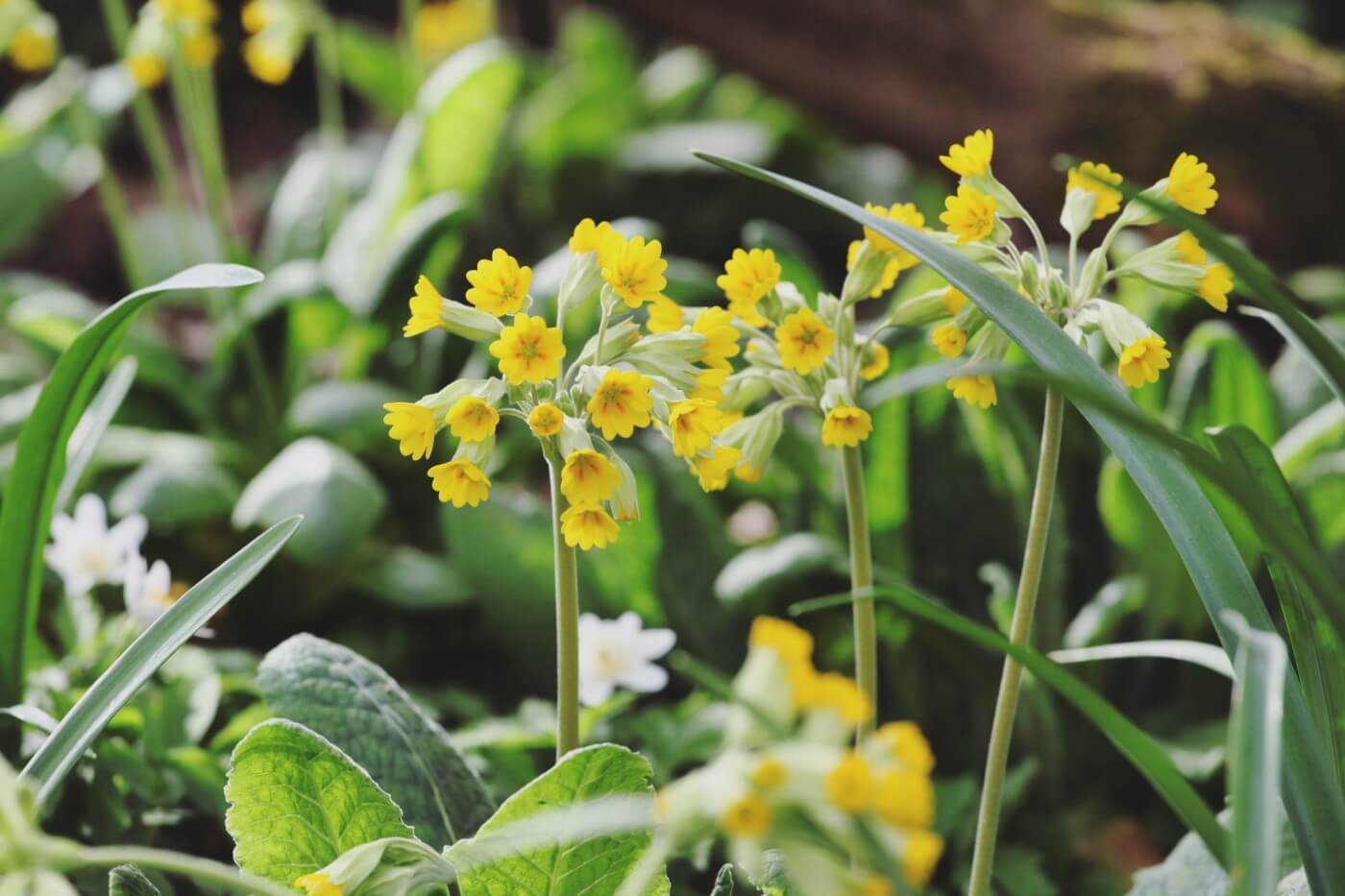 In the 16th century, cowslips were often connected to fairies and magic. Beliefs surrounding these “faerie cups” lead to an association between the yellow flowers and adventure, mischief, and hidden treasure. To the Victorians, the common cowslip carried the symbolic meaning of “winning grace” and “comeliness.”

Cowslip flowers (Primula veris) belong to the Priumula genus, part of the Primulaceae or primrose family. Primula contains about 500 species and many more varieties, thanks to centuries of cultivation. Other common names include faerie cups, key flower, key of heaven, Mary’s tears, golden drops, and freckled face.

P. veris is a clump-forming, herbaceous perennial that grows to about 9 inches tall. It was oval, slightly hairy leaves and blooms with a profusion of tubular flowers atop an erect stem.

The cowslip’s lemon-yellow flowers have a fruity, herbal scent that’s been described as somewhere between apricot and dill.

Cowslip flowers are found in meadows, open woods, and roadsides across the temperate regions of Europe and western Asia. Long a feature of rural English pastures, the flower once grew in profusion. The first recorded plant stems to 1538 in Lancashire. Then, cowslip was valued for its medicinal and edible uses.

As its natural habitat decreases due to human development, the cowslip has become harder to find. Between 1930 and 1980, grassland areas diminished. This decline was especially significant in the 1950s when modern farming techniques introduced chemical herbicides on a large scale.

Today, the cowslip is making a comeback in some regions of Europe. It’s also naturalized in parts of North America, where it heralds the arrival of spring in New England.

Some believe “cowslip” comes from “cow slop,” due to the plant’s tendency to grow in part of pastures where cows relieve themselves. Others think that the name actually has more polite origins, and refers to the boggy, wet ground that cowslips prefer.

What Regions are Cowslip Flowers Native to?

Cowslips are native to Europe, Algeria, and Western Asia.

When are Cowslip Flowers in Season?

Uses and Benefits of Cowslip Flowers

Along with their beautiful blossoms, cowslip flowers have long been valued for their culinary and medicinal uses.

For instance, in Spain, the foliage is commonly eaten as a green or in a salad. In England, flowers are used to make vinegar, and sweets. The flowers may also be used to make cowslip wine and tea.

Traditionally, cowslip flowers and plants have been used in folk medicine traditions to treat:

Cowslips have not been reported to be toxic to humans, dogs, cats, birds, horses, and livestock.

The lovely yellow flowers do attract pollinators such as bees and butterflies. It’s a special favorite of the brimstone and Duke of Burgundy butterflies.

The flower also has strong symbolic meaning in English folk traditions, often tied to its early appearance in spring. It was used to decorate church paths at weddings and in May Day garlands.

The Cultural Significance of Cowslip Flowers

Cowslip flowers have a long and storied history in Europe. To the Celtic Druids, the plant possessed magical properties. It was believed to aid in the absorption of other herbal remedies.

Legend links the plants to St. Peter; the saint is said to have learned that people were sneaking into heaven through a secret entrance. He was so angry that he dropped his keys to heaven onto the ground, and cowslips grew where his keys fell. This story led to the plants being called “key flower,” “herb Peter,” and “key of heaven.”

Another link between cowslips and keys is found in Norse mythology. Here, the flowers were the symbol of Freya, also known as the “key virgin.” The flowers were thought to be a key that would admit the bearer to Freya’s palace. Over time, the story was adopted by Christians and linked to the Virgin Mary instead, leading to the common name “Mary’s tears.”

Cowslips have also long held a connection to fairies in traditional European folklore. It was thought that fairies valued the flowers for their magical properties and that humans could use them to find fairy treasure. Associations with mischief and adventure come from this folklore tradition.

References to cowslips abound in the works of William Shakespeare. In Henry V, the “freckled cowslip” is used to indicate a well-maintained pasture. The Tempest also mentions cowslips; “Where the bee sucks, there suck I: In a cowslip’s bell I lie.”

The Bard also wrote of the connection between cowslips and fairies in A Midsummer Night’s Dream:

“And I serve the fairy queen, To dew her orbs upon the green:

The cowslips tall her pensioners be; In their gold coats spots you see;”

The flowers figure in artwork, such as this eighteenth-century sketch by artist Thomas Stothard.

Cowslip flowers add a touch of sunny brightness to any floral gift. Their cheerful appearance and lovely apricot fragrance make them a welcome addition to bouquets given on birthdays, to congratulate achievements such as graduation, for coworkers and friends, and just because.

Though they’re not associated with romance, cowslips do symbolize grace and comeliness. They’re a great way to tell someone you appreciate them and even that you find them attractive.

How to Grow and Care for Cowslip Flowers at Home

Cowslip flowers aren’t difficult to grow at home. In fact, they’re low-maintenance and pest-resistant, including deer and rabbits.

Cowslips prefer damp to moist soil and partial shade, and are a great choice along walkways, in beds, and for borders. Keep soil moist, but don’t overwater. Mulch with compost or rotted manure once per year. Grow primroses in USDA zones 5 to 8.

Cut primroses usually won’t last more than a few days, but you can help keep them fresh longer. Cut stems under cool water on the diagonal and change water frequently.

Cowslips make a cheerful, fragrant addition to partially shaded areas in the landscape and to floral gifts. With their long history in folklore and myriad medicinal and culinary uses, these European natives are sure to be a favorite. In the language of flowers, use P. veris to let someone know you appreciate their comeliness and grace.

Why are they called cowslips?

Cowslips may be named for “cow slop” due to their tendency to grow in pastures populated by cows. They may also be named for the boggy conditions in which they naturally thrive in the landscape.

Cowslips are not known to be toxic to humans, dogs, cats or livestock. In fact, they’re edible; flowers and foliage play a role in several European culinary traditions.

Cowslips aren’t rare, but they’re not as widespread as they once were. With the advent of modern farming techniques and the loss of grasslands across Europe, the flowers’ range has declined.

Cowslip plants will self-seed after flowering.

What do cowslip flowers symbolize?

In the language of flowers, cowslips symbolize comeliness and winning grace. Their long connection to fairies also imbues an additional meaning of adventure and mischief. 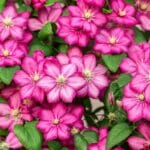 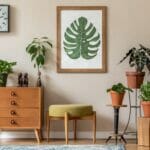