Lobelia cardinalis, commonly known as the cardinal flower, has long graced wet areas of the landscape with its tall spikes of bright red blossoms. Cultivated in Europe since the 1600s, legend has it that the cardinal flower is named for the long, red robes worn by leaders of the Catholic Church. But this perennial also plays a role in medicine traditions. Native Americans used cardinal flowers, leaves, and roots to treat pain, colds, fevers, digestive problems, and more. Here we’ll take you through the rich history and origins of Cardinal flowers, their meaning and symbolism today, plus essential tips on gifting and growing cardinal flowers at home. 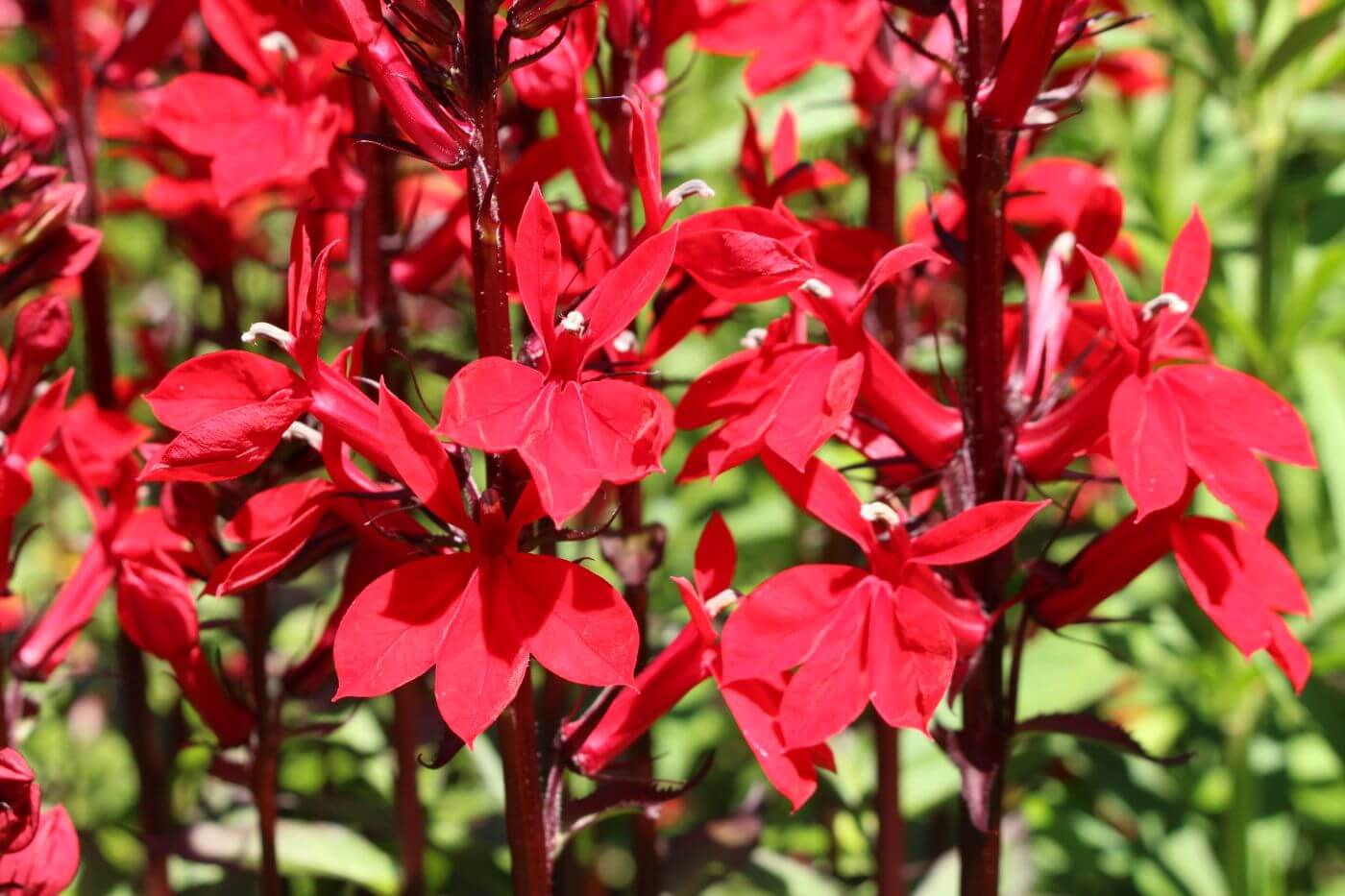 The Meaning & Symbolism of Cardinal Flowers – The Essentials

To the Victorians, a gift of cardinal flowers carried the symbolic meaning of distinction. The flower takes its name from the long, red robes worn by leaders of the Catholic Church. In the language of flowers, L. cardinalis’s spikes of bright crimson lend a sense of distinction to a floral gift.

L. cardinalis is a herbaceous perennial that grows up to five feet tall. It has dark green, alternative foliage with toothed margins.

Cardinal flower blooms with showy, erect racemes of red, burgundy, pink, or white blossoms. Flowers are about 1.5 inches long and tubular-shaped and typically cardinal blossoms do not have a strong fragrance.

Though the cardinal flower is native to North America, it’s been cultivated in Europe since the seventeenth century. French explorers came across the flower in Canada in the 1600s, and sent specimens back to France.

Its bright flowers quickly grew popular and European home gardens soon boasted these beautiful plants. A 1629 letter from English botanist John Parkinson describes receiving a packet of seeds from Paris that contained “the rich crimson cardinal flower…it groweth neere the river in Canada, where the French plantation in America is seated.”

L. cardinalis is a popular landscape perennial for the home garden and grows wild across wetlands, swampy areas, and near streams and ponds across many regions of North America.

Several varieties have been cultivated, such as:

Legend has it that the common name of L. cardinalis is based on the long, red vestures worn by Roman Catholic cardinals.

What Regions are Cardinal Flowers Native To?

Cardinal flowers are native to North America. Their range stretches from New Brunswick, Quebec, and Ontario in the north, to Florida and Texas, and across areas of the Mid-West and the southern U.S. states to California.

When are Cardinal Flowers in season?

Uses and Benefits of Cardinal Flowers

Medicinal Use by Native Americans

Cardinal flowers have long been prized for their many medicinal uses. The Cherokee tribe applied crushed cardinal flowers to painful areas to relieve headache, and crushed roots to heal sores. Root infusions were used to treat worms, typhoid, and digestive problems, while the foliage was used to treat colds and fevers.

The Iroquois used the cardinal flower to treat epilepsy, as a pain reliever, and to ease cramping. Healers also utilized the entire plant to help patients deal with grief.

Use of Cardinal Flowers in Medicinal Research Today

Today, scientists have found that L. cardinalis contains a high concentration of the alkaloid lobinaline. Research indicates that lobinaline and other compounds in L. cardinalis offer promise for treating attention deficit disorder and use in smoking cessation efforts. The compounds found in L. cardinalis are used to treat certain respiratory issues, such as whooping cough bronchitis, and asthma.

Pollinators such as birds and butterflies flock to cardinal flowers, thanks to their bright hues and tubular blossoms. The flowers are especially attractive to hummingbirds and bloom right at the time when many hummingbird species are migrating.

The Cultural Significance of Cardinal Flowers

The red cardinal flower meaning has long been associated with love and romance. Legend has it that if an elderly woman wants to find love, she needs only to touch the root of a cardinal flower.

In some Native American cultures, finely ground root was added to foods to create an aphrodisiac. It was also considered an important ingredient in love potions and love charms.

Cardinal Flowers in Art and Literature

Cardinal flowers have appeared frequently in art and literature. The 19th-century botanical artist Mary Vaux Wolcott painted watercolors of the flowers, which appear in the Smithsonian permanent collection.

The flowers featured in the writing of Nathaniel Hawthorne, who in his 1842 “Note-Books” wrote:

“…I have found scattered stalks of the cardinal flower, the gorgeous scarlet of which it is a joy even to remember. The world is made brighter and sunnier by flowers of such a hue. Even perfume, which otherwise is the soul and spirit of a flower, may be spared when it arrays itself in this scarlet glory. It is a flower of thought and feeling, too; it seems to have its roots deep down in the hearts of those who gaze at it.”

Cardinal flowers lend a brilliant red color to any floral gift. Their association with love and romance makes them a good choice for anniversaries or special date nights.

The flower’s association with distinction in the Victorian language of flowers also makes them a good choice for floral gifts that acknowledge achievements, such as graduation, or to a boss or co-worker.

How to Grow and Care for Cardinal Flowers at Home

Cardinal flowers are easy to grow — but only under the right conditions. They thrive in wet areas, such as pond edges, and can even tolerate brief flooding. Grow cardinal flowers in USDA zones 3 to 9.

They prefer rich, moist to wet soils and can’t ever be allowed to dry out. When growing in a northern climate, cardinal flowers can tolerate full sun. In regions with warm summers, plant in partial shade. Apply mulch to preserve moisture and protect roots.

To keep cut cardinal flowers fresh, place them in a clean, scrubbed vase. Cut stems at a 45-degree angle while underwater and remove any foliage that’s under the waterline. Add cut-flower food to the vase and refresh water frequently.

Cardinal flower’s bright color and showy blossoms make them an attractive ornamental for the landscape, as well as a striking addition to a floral gift. With a long history of medicinal use and the symbolism of distinction, it’s easy to see why cardinal flowers have been popular and valued for centuries.

What does the Cardinal Flower symbolize?

In the language of flowers, cardinal flowers symbolize distinction. They also have a cultural connection to passion and romantic love.

Cardinal flowers are native to North America, where they grow freely in wetlands, along waterways, and in marshy areas. While their flowers are not rare, they grow best in specific conditions and require constant moisture to thrive.

Do cardinal flowers come back every year?

Cardinal flowers are perennials, so they will come back. However, they may be considered short-lived perennial as their growing conditions must be just right for them to thrive.

Cardinal flowers are not considered invasive, but they may self-seed under the right conditions.

Is the cardinal flower poisonous?

Cardinal flowers contain alkaloids, which are toxic to humans, dogs, cats, and horses when ingested. 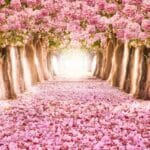 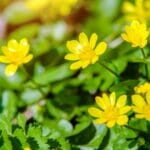