As a roadside flower now spread to many parts of the world, Bellflowers are an eye-catching blue or purple addition to any meadow. They’re a large genus that includes hundreds of different species, including quite a few attributed with insightful symbolism. Here we’ll take you through everything you need to know about the meaning and symbolism of Bellflowers, their history and origins, uses and benefits, and best gifting occasions today. 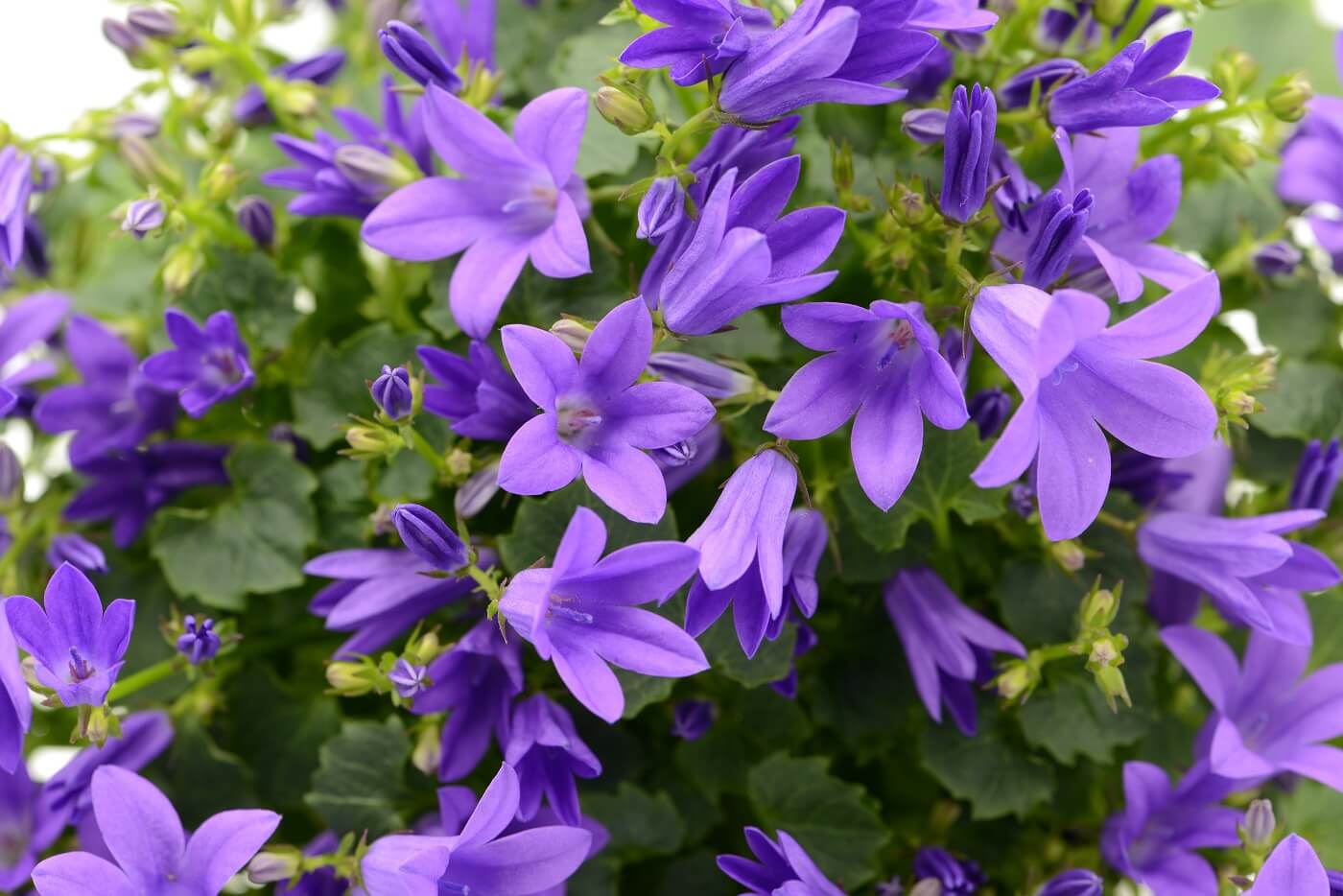 The Meaning & Symbolism of Bellflowers – The Essentials

In the language of flowers, Bellflowers carry a number of complementing symbolic meanings. Some cultures consider it a symbol of gratitude, while others assign it a meaning of constancy, support, romance, or even vanity. The color of the exact bloom also affects the symbolism of the Bellflower.

Bellflower is a common name that can apply to almost all of the 500 different species that are part of the Campanula genus. Campanula is part of the larger Campanulaceae family, which includes the Lobelia and other families.

There is a lot of variation between various types of Bellflowers, including whether a particular species is an annual or perennial. However, they almost all feature blue to purple cup-shaped or bell-shaped flowers.

They also tend to prefer cooler climates, with most species thriving in USDA zones 4 to 8. Heat is a problem for most species and many spread aggressively without control efforts.

Bellflowers have been cultivated for centuries in their native ranges. The plants spread early in the 1700s and 1800s with the arrival of colonists in the New World.

There is a surprising amount of variety in the styles of Bellflowers. Some are tall, upright, and feature large flower clusters, while others sport small hanging blooms instead.

Yet blue and purple colors for the blooms are common among most of the species. Serbian Campanula, or Campanula poscharsky­ana, is a popular ground cover that spreads widely before putting out star-shaped blooms.

Korean Campanula, or Campanula takesimana, is a good alternative that features cream-colored flowers instead.

No matter the name, all Bellflower references point back to the bell shape of the flower. The common name has an obvious etymology, but even Campanula is the diminutive form of bell in Latin.

What Regions are Bellflowers (Campanula) Flowers Native to?

Some species of Bellflowers are native to North America, while others are found exclusively in Europe. The plants are spread mostly across the Northern Hemisphere in general, with populations in mountainous areas of Asia and Africa as well. Now that they’ve spread across many other regions, they can be found growing wild in almost every temperate or cooler tropical area in the world.

When are Bellflowers (Campanula) in Season?

Most species provide a long blooming window. Some species begin flowering in late spring and continue through the end of fall. Other varieties feature a smaller flowering window of just spring or early fall. This helps you plan out seasonal plantings.

Uses and Benefits of Bellflowers

In general, Bellflowers are primarily used as landscaping flowers and as ornamentals.

They’re bee-friendly and attract pollinators, but some species can be mildly irritating to pets and children. The genus as a whole is considered low risk or harmless.

Other species are even edible. The leaves and flowers of Rampion in particular are considered a safe and tasty form of Bellflower. Make sure to identify any cultivated or wild Bellflowers before trying to eat them.

Traditionally, Bellflowers have carried the symbolic meaning of gratitude, constancy, support, and romance. Regardless of the specific species or variety, Bellflowers share a common set of meanings and symbolism.

However, each blossom has a slightly different meaning depending on its specific color. Make sure to take all symbolic factors into account before planning out a flower bed or bouquet that you want to communicate a certain message.

The color of the Bellflower blooms plays a role in the specific meaning of each flower. This genus provides a surprising variety of colors across its nearly 500 different species. Variations on the common meaning of Bellflowers includes:

The Cultural Significance of Bellflowers

Multiple cultures have attached meaning to this genus of flowers. Pick and choose different meanings for Bellflowers to give your bouquets a whole new layer of symbolism.

One species of Bellflower in particular is linked to the beauty of Venus and her vanity. She was known to have a magical mirror that showed her the most beautiful things in the world. When she lost it, a shepherd found it and kept it. Venus asked her son Cupid to find the mirror for her. When he found it with the shepherd, he had to shoot it from the man’s hand. This broke the mirror into many tiny pieces. The Venus’ Looking Glass Bellflower takes its name from this myth because of its shiny seeds.

Bellflowers in The Victorian Flower Language

White or cream-colored Bellflowers in particular were popular among Victorians for bouquets and symbolic arrangements. This attractive bloom was considered to carry a meaning of gratitude during this time period.

It was commonly given as a way of thanking someone who had done a favor for you. It could also convey a romantic meaning if chosen in a magenta or pink color instead.

Pyramid-shaped Bellflower blooms were considered to symbolically represent constancy instead. It was often used to indicate a desire to remain committed to someone despite difficulties.

The meaning of gratitude is often attributed to the Bellflower, and this meaning comes directly from Christian myth. Harebells in particular, or Campanula rotundifolia, were considered to be dedicated to St. Dominic.

He was an ascetic Christian monk who founded the Dominican order of the church. The flower’s sparse foliage and nodding flowers are reminiscent of his penitence and focus. Harebells were also widely mentioned by William Shakespeare in multiple sonnets and poems.

Due to its many layers of different meanings, it’s possible to use different types of Bellflowers in a variety of arrangements. For example, pink or red-colored Bellflowers may be perfect for a romantic meaning of consistency in a wedding bouquet.

On the other end, it’s possible to send a message of gratitude and support with sprigs of blue or purple blooms.

How to Care for Fresh Cut Bellflowers at Home

All Bellflowers are relatively fragile and will only stay fresh for a few days after cutting. Keeping the blooms in coolers for a few days can help them last as long as possible as cut flowers. Also, water changes on a daily basis are essential for bouquets and arrangements including these blossoms.

Campanula is a genus full of beautiful flowers that are all rich with history and meaning. Add a few to your landscape if you live in a temperate or cooler area, or consider just using Bellflowers in your floral arrangements.

What does Campanula symbolize?

Campanula can represent vanity, beauty, gratitude, dedication, and even romantic love. The specific color and style of bloom largely determines the specific meaning of each Bellflower species.

How long do campanula flowers last?

While attached to the plant, individual Campanula blooms can stand for days to weeks before fading. Due to their continuous blooming habit over long periods, they can often produce flowers for months at a time. Yet once cut, they dry up after two or three days.

Do campanulas flower every year?

Annual varieties will only bloom once and won’t return unless you seed them or plant new seedlings. Perennial Bellflowers will return year after year during the right season.

Most Bellflowers are known for spreading well, with some considered weedy due to their aggressive growth. Even annual species can become invasive due to their self-seeding habits.

What color are bellflowers?

Bellflowers are available in a wide range of colors, from cream to blue, purple, magenta, and more. 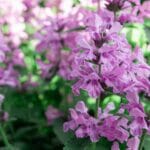 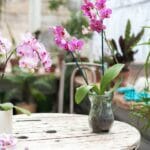