With bright star-shaped flowers clustered on a tall stalk, it’s no surprise that Asphodel has caught the eye and inspired the imagination for millennia. These plants first earned a symbolic use in Ancient Greece, but they’re still a part of bouquets and arrangements today that send a strong message. Discover the deeper meaning behind the beautiful Asphodel bloom before using it in your next floral arrangement or landscape design. 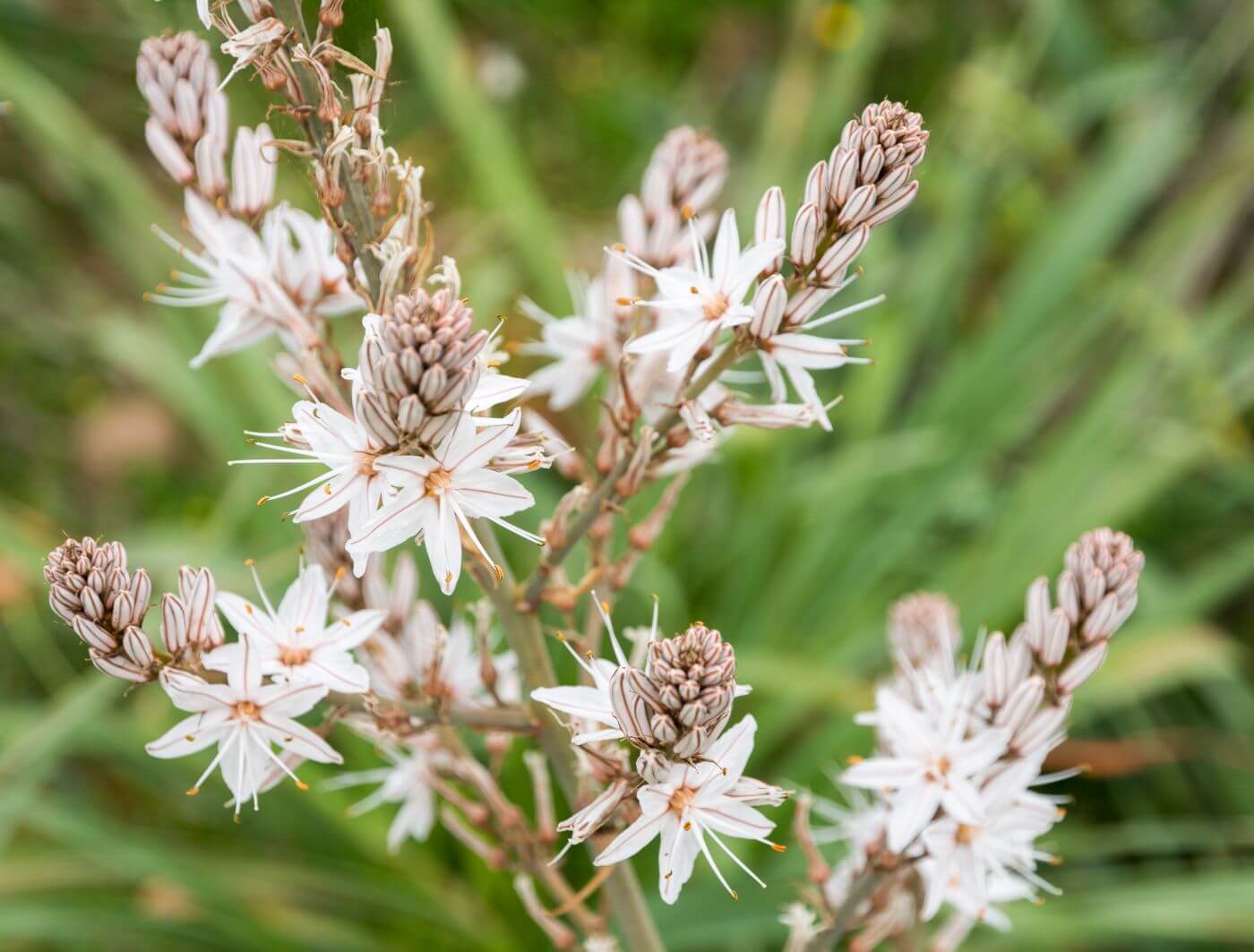 The primary symbolic meaning of the Asphodel flower is peace after death and the afterlife. This meaning was assigned to the flower dating back to Ancient Greece. The symbolism remains consistent today, making Asphodel a flower commonly used to commemorate the anniversary of a loss or a funeral.

There’s more to this group of striking flowers than meets the eye. Explore what’s under the surface with the history and botanical characteristics of the Asphodel.

Asphodel itself is an entire genus that includes 16 different species, all of them flowering. These flowers used to be considered types of lilies, but now they’re in a separate family known as Asphodelaceae. This family also includes the daylily genus Hemerocallidoideae, which is not considered part of the true lilies.

All of the members of the Asphodel genus share some common characteristics. They all have attractive star-shaped flowers, tall central stalks, and tufted leaves that give the plants a distinctive look.

The flowers tend to be white or red-striped but have no noticeable odor. Most of the plants are perennials that grow large established roots, but a few species return by self-seeding alone.

Asphodels have been cultivated since the time of Ancient Greece, but they remain relatively unimproved for most varieties. Carl Linnaeus was the first to officially describe the plant in 1753.

Asphodel is not specifically cultivated, but some species are grown from wildflower seed as cut flowers. Asphodelus aestivus is one of the most commonly grown species, also known as summer Asphodel. Asphodelus albus, or common white Asphodel, is the species most widely used as a cut flower.

The name Asphodelus dates back to the Greek period. The name refers to its lily-like appearance and its spear-shaped leaves.

What Regions are Asphodel Flowers Native to?

Asphodel may only have 16 distinct species in the genus, but these plants are spread widely across the world. Some species are native to temperate Europe, while others are concentrated in the Mediterranean and North Africa.

A few species are found only in Asia, India, or the Balkans. Now that the plants have been spread wide and far as introduced wildflowers, there are also wild populations in the U.S., Australia, and Central America as well.

When are Asphodel Flowers in Season?

Some of the most commonly grown garden Asphodel varieties, including the common white Asphodel, bloom in late spring from May to June.

Other varieties don’t start blooming until the heat of August sets in and disappear by the time temperatures cool a month or two later.

No matter the specific species or bloom window, these flowers only tend to bloom for a relatively short period of time.

Uses and Benefits of Asphodel Flowers

The various Asphodel species aren’t directly edible because the leaves and roots contain alkaloids that are damaging to the organs over time. However, they are indirectly used in the production of traditional burrata in Italy. The leaves of the Asphodel are wrapped around each finished ball of cheese. Since the creamy fresh cheese is only good for a few days, the rapidly wilting leaves demonstrate its age.

The leaves and flowers can be irritating to pets and children, so keep them well-contained. It’s primarily an ornamental plant, but the large white flowers are attractive to bees and other pollinators.

Almost all Asphodel flowers are pure white to light gray in color. This gives them a secondary meaning of purity, peace, healing, grace, humility, and recovery.

Some Asphodel have a single red stripe running up the middle of each petal. This can add a layer of extra meaning in the form of love, devotion, or passion.

The Cultural Significance of Asphodel Flowers

Asphodel may only have one major spiritual meaning that dates back to its value in Greek mythology. However, that doesn’t stop it from carrying multiple significant cultural meanings in various parts of the world.

The primary symbolism of Asphodel comes from the Ancient Greek culture. To the Greeks, the flower was a potent symbol of death, the afterlife, and the hope for eternal peace. A giant field of the Asphodel bloom was considered part of the Underworld. In particular, it was a neutral area where people who weren’t particularly good or evil would go. The goddess Persephone wore a crown of the blossoms since she would travel between the Underworld and the living world with the changing of the seasons.

As the Victorian era dawned, the flower was once again appreciated for more than its white blossoms. As in centuries before, the people using the Language of Flowers also used this flower for commemorating the dead.

The specific meaning of the Asphodel was something like “Remembrance of One Who Has Passed”. Another possibility was “Happiness and Peace After Death”.

The use of Asphodel leaves in the production of fresh burrata also lends the plant another cultural meaning.

It becomes a symbol of freshness, fragility, and the quick passage of time in this use. Since the leaves wilt and dry out within three to four days after picking, it’s a clear indicator that a burrata was freshly made.

Remembrance of the Homeland

In Greece and Corsica, there is a common saying involving the Asphodel. The saying is “He has forgotten the Asphodel.” It’s a way of referring to someone who has moved away and forgotten about their homeland.

Use in Art and Literature

Due to their timeless association with death and the afterlife, numerous poets from the ancient era to today have used Asphodel as a symbol. Everyone from Ezra Pound to Edgar Allen Poe and Oscar Wilde has famously invoked the flowers.

Even record labels, clothing lines, and perfume companies have taken inspiration from the symbolic meaning of the Asphodel flower.

Due to their long history of symbolizing death and the afterlife, Asphodel flowers are most commonly used for funeral arrangements. They’re ideal for giving to someone who has lost a loved one recently or who is about to reach an anniversary of a death.

How to Care for Fresh Cut Asphodel Flowers at Home

Asphodel flowers only last a few days once added to a bouquet. Keep them in a cooler or refrigerator until it’s time to display them.

Few other flowers have as focused a symbolic meaning as the Asphodel. These spike-shaped flowers are eye-catching when part of the landscape or bouquet, but they also carry a deeper meaning.

How do you grow Asphodel?

These flowers prefer full sun to partial shade, but they can’t handle high heat or humidity. Stick to areas with well-drained and even sandy soil.

What does Asphodel symbolize?

It’s a powerful symbol of the afterlife and preparing for the inevitability of death. To some, it also represents rebirth and the potential of life after death.

Asphodel flowers are white, may feature a red stripe up the petal, and generally have a distinctive star shape.

Despite their attractive flowers, most Asphodel species have no specific odor. The leaves and stems may have a slightly medicinal green smell when crushed or used in the production of burrata.

Can you eat Asphodel?

Even though Asphodel is used in the creation of food like burrata, it’s not edible itself. It was once widely eaten by North African and Greek cultures, but modern testing has shown these species aren’t safe to consume. 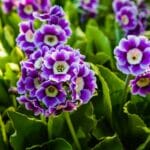