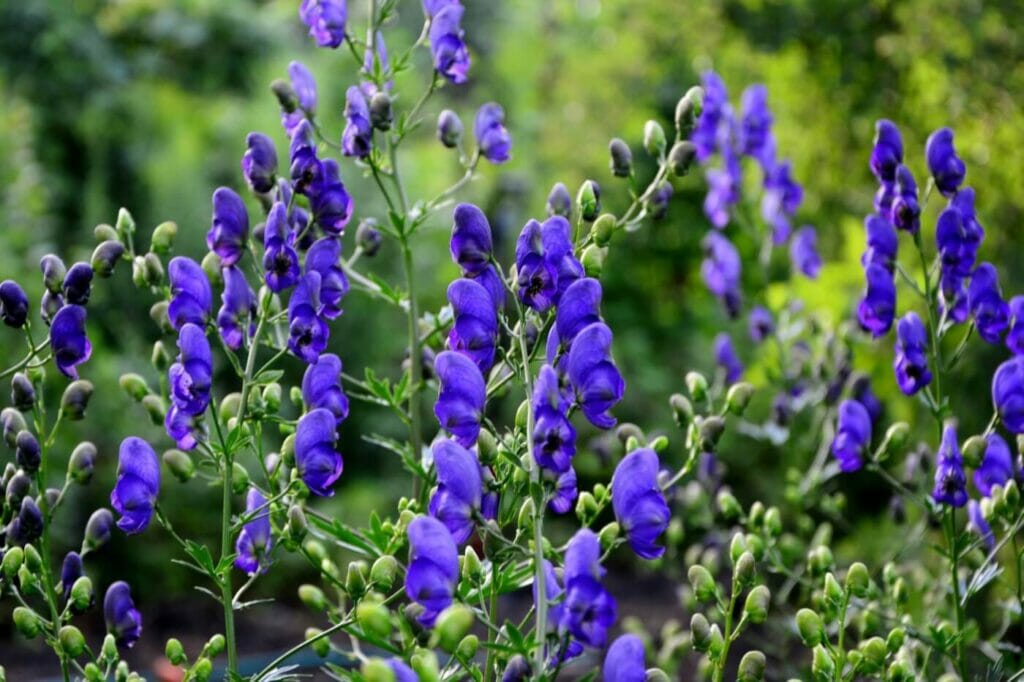 Everything You Need to Know About Wolf’s Bane Flower Meaning, Symbolism, and Cultural Significance

For spikes of dramatic color, wolf’s bane flowers can’t be beaten. Also known as monkshood or aconite, the plant’s deep blue spires add drama to the late summer garden. Wolf bane’s toxic properties have earned it a place in myth and legend; in ancient times, hunters tipped spears and arrows with poison from the plants, and mentions of wolf’s bane figure in artistic works from Ovid, Shakespeare, and Keats to Harry Potter and Game of Thrones. Here we’ll take you through everything you need to know about Wolf’s Bane flower meaning and symbolism, their history and origins, uses and benefits, and cultural significance around the world today.

In the language of flowers, wolf’s bane signifies caution, treachery, and misanthropy. The flower’s symbolism meant that it was often used as a warning. A gift of wolf’s bane flowers was seen as a symbol to the recipient to take care as danger lies ahead.

Wolf’s bane, also known as monkshood, wolfsbane, or aconite, belongs to the Aconitum genus, which contains more than 250 species. Aconitum is a member of the Ranunculaceae or buttercup family, which contains over 2,000 species of flowering plants, including the similar-looking delphiniums.

Wolf’s bane grows from three to four feet tall. This perennial has dark green, lobed foliage that grows in spirals on a tall, erect stem.

Aconite flowers are deep blue, purple, or white. They bloom in racemes up to eight inches long. The upper part of the blossoms have a hood- or helmet-like shape and have little to no fragrance.

Hundreds of species of aconite, many called wolf’s bane, grow across the Northern Hemisphere. In 1727, Linnaeus wrote of A. lycotonum in Lapland, thought to be the first attempt at classifying the genus.

Aconitum has long figured in history, from Russia to China, India to Japan, and across Europe. Many cultures made poison from the plants, used for hunting, war, and political assassinations. It’s believed to be one of the first poisons ever used in ancient Greece and Rome. The ancient Chinese used aconite to poison arrows and in regions of Europe and North America, it was used to kill wolves and other carnivores.

All parts of wolf bane are toxic to humans, dogs, cats, and other animals. In North America and Europe, most poisoning incidents come from ingestion of A. napellus, which is grown as an ornamental. In China and other parts of Asia, most poisonings come from A. carmichaeli or A. kuznezoffii.

Many incidents are related to the plants’ use as a therapeutic element in herbal medicine. Unfortunately, the dosage is difficult to control, leading to toxic doses. The plants contain aconitine, an alkaloid that, when ingested, can cause heart arrhythmia, numbness, gastrointestinal issues and respiratory distress.

There are thought to be more than 250 species and multiple cultivars of Acontium, including:

Aconitum is thought by some to stem from the Greek word for dart or javelin (akon), a reference to the practice of using the flowers to create poison-tipped arrows. However, others think the name stems from the word akonae, which refers to rocky soil in which the plants grow.

The common name “wolf’s bane” comes from the European practice of using the plant’s poison to kill livestock predators such as wolves. “Monkshood” refers to the shape of the hoods that English monks traditionally wore, which resembles the shape of the flowers.

What Regions are Wolf’s Bane Flowers Native To?

Wolf’s bane is native to large swaths of the Northern Hemisphere, including parts of Asia, Europe, and North America.

When are Wolf’s Bane Flowers in Season?

Most wolf’s bane flowers in late summer through early fall.

Wolf’s bane has long been used to create poisons and toxins for both humans and animals. From the poison-tipped arrows used in Ancient Greece, Rome, and China, to the European and North American historic practice of using the plants to kill predators, the plants’ toxic qualities have long been exploited.

However, the plant has medicinal properties, as well… though if not used correctly, herbal concoctions that contain Aconitum can be harmful or even deadly. A. nepellus has been used topically for a number of therapeutic purposes including:

Historical records indicate that other Aconitum species have been used for medicinal purposes throughout history, including in traditional Chinese medicine, Ayurveda, and by Pliny the Elder. In most cases, the plants are treated by boiling or cooking to lessen toxins before application. Modern scientific research indicates several potential therapeutic uses for Aconitum.

The Meaning, Symbolism, and Cultural Significance of Wolf’s Bane Flowers

Wolf’s bane flowers bloom in a range of colors, from deep blue to purple, white, and yellow, though the most common ornamental variety, A. napellus, has blue blossoms.

In the Victorian language of flowers, wolf’s bane symbolized caution, misanthropy, and treachery. When given as a gift, wolf’s bane was often used to send a warning, and to say take care, for danger lies ahead.

The flowers have long been associated with caution and even death. Many ancient cultures used the plants to make a poison that tipped arrows, spears, or javelins that were used to hunt — such as wolves, ibex, whales, and bears — or in war. The flowers are also the stuff of legend.

In Greek mythology, aconite was said to originate from the slobber of the three-headed dog Cerebrus, guardian of the gates of hell. Ovid wrote that as Heracles chained and drug the monster out of Hades, the dog’s slobber fell on the ground and aconite flowers grew. The goddess Athena used wolf’s bane to transform Arachne into a spider; Medea used wolf’s bane in wine in an attempt to position Theseus.

European folklore includes the plant in witches’ brews and flying ointments. In the Dark Ages, it was also believed to either cause or cure lycanthropy, or “werewolfism.” A 13th-century Japanese folktale tells of servants who mistook dried wolf’s bane for sugar, and suffered unpleasant consequences.

Shakespeare uses the symbolism of toxic aconitum in Henry IV, describing it as a “venom of suggestion” that can be used to cause problems in relationships. In Hamlet, Laertes uses an aconite-tipped blade to kill Hamlet.

The plants appear in the art and literature of more recent times. The 19th-century poet Keats wrote of the “poisonous vine” in his Ode to Melancholy. In the 1931 film Dracula, wolf’s bane offered protection against vampires.

More recently, in the Harry Potter series, the plant is a subject of discussion in potions class and is used to help prevent a professor from transforming into a werewolf on the full moon.

Many crime novels, dramas, and films use aconite as a murder weapon, from NCIS to Midsomer Murders; in Game of Thrones, one of Tywin Lannister’s guards is killed by a wolf’s-bane-tipped dart.

The tall spires of wolf’s bane add dramatic color to the late-summer garden. This perennial’s blue, purple, and yellow blooms may be lovely, but every part of the plant is toxic, so care must be taken when planting or gifting. In the Victorian language of flowers, wolf’s bane signifies treachery, misanthropy, and caution, and warns that trouble may lie ahead.

Why is wolfsbane poisonous?

Wolfsbane contains the alkaloid aconite, a powerful neuro-, and cardio-toxin. All parts of the plant contain aconite, which when ingested can lead to cardiac and respiratory distress, or even death.

Does wolfsbane have a smell?

Wolfsbane does not have a strong scent. Typically the fragrance is associated with the soft, green scent of woodlands.

Does wolfsbane grow in America?

There are several species of wolfsbane native to North America and the U.S. Many other varieties grow as ornamentals.

Wolf’s bane is not invasive and is considered both deer and rabbit resistant.

Wolf’s bane is native to the temperate regions of Asia, Europe, and North America. 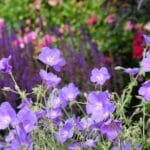 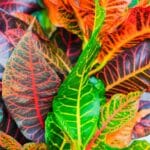 17 Best Types of Croton Plants to Grow at Home