Stargazer lilies, or Lilium ‘Stargazer’, are beautiful flowers with a unique and mesmerizing look. These flowers become even more fascinating when you learn about their meaning, symbolism, and history. In this guide, you’ll find everything you need to know about the Stargazer lily, from its origins to its meanings today. We’ll discuss the cultural significance, frequently asked questions, appropriate occasions for gifting, and more. 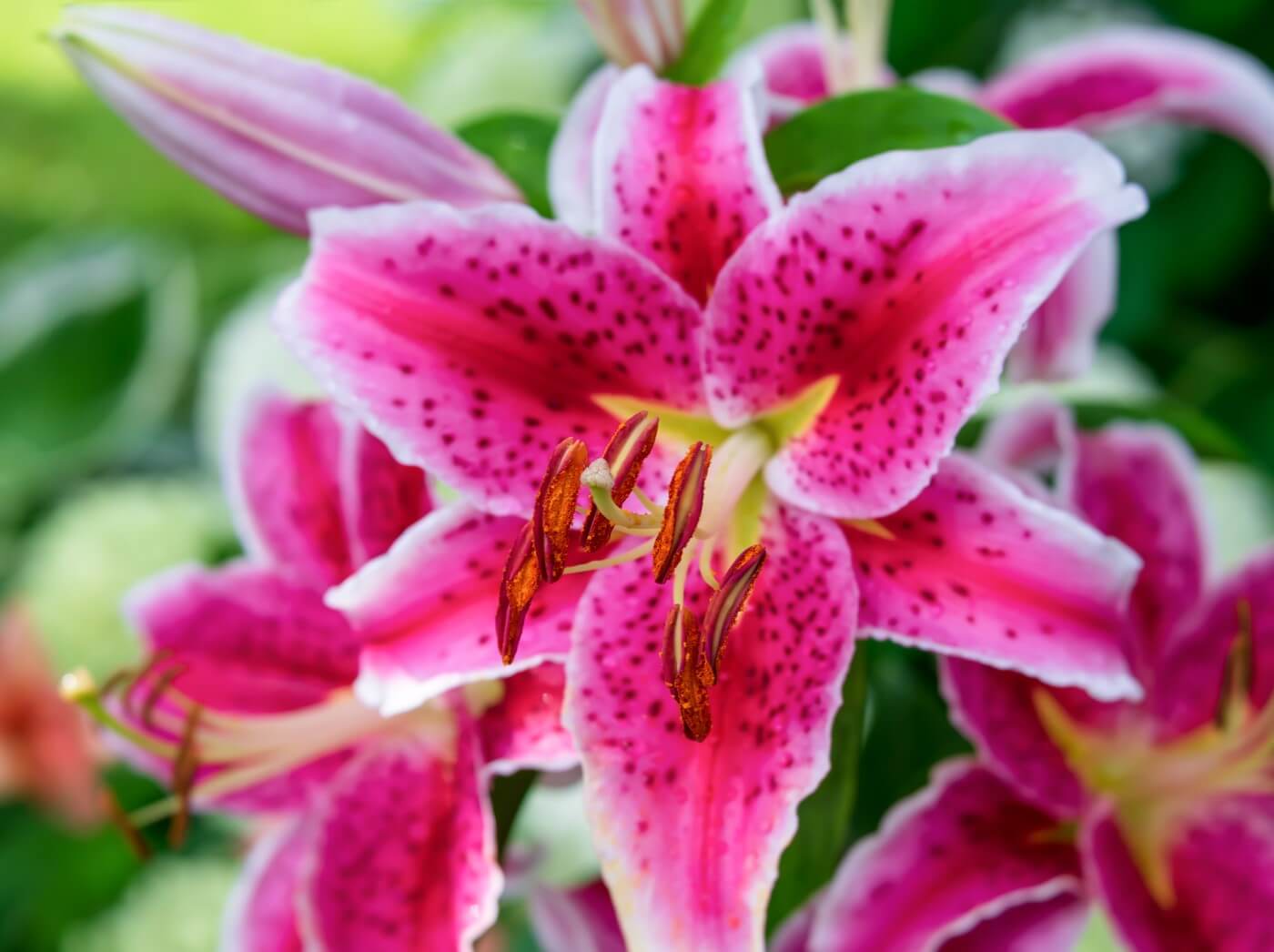 The Meaning and Symbolism of Stargazer Lily Flowers – The Essentials

The Stargazer lily’s most well-known meanings today are abundance and good fortune. The flower resembles a perfect star—a common symbol of prosperity in some cultures. The flower wasn’t represented in the Victorian language of flowers, as it is a fairly new hybrid first cultivated in 1974.

The Stargazer lily is a hybrid member of the Liliaceae family and falls under the genus Lilium. This lily’s scientific name is Lilium ‘Stargazer’.

The term stargazer comes from this plant’s large, upward-facing blooms. Unlike some other types of lilies that bloom toward the ground, Stargazers face up toward the sky. Some may use this flower’s name to describe lilies in the ‘Oriental group’ with a similar appearance.

This lily’s petals are often reflexed or bent backward. Usually, they have six long stamens at the center with bright orange tips, called anthers. The plant can reach around 36 inches in height with a spread of up to 14 inches.

Now, the Stargazer lily can have anywhere from two to eight flowers on each stem. It is a perennial bulb, so it will continue to bloom for years to come.

Stargazer lilies are fragrant flowers with a sweet, intoxicating scent. Flower buyers tend to enjoy this flower’s powerful aroma. However, some consider it too strong for their tastes.

History and Origins of Stargazer Lilies

The Stargazer lily was first cultivated in 1974 by American lily breeder Leslie Woodriff. He developed the variety as an alternative to the Rubrum lilies. This flower had a downward, wilted-looking growth habit that was unappealing to many consumers.

The result was an attractive commercial lily that pleases many buyers with its beautiful look and fragrance. The flower is most often used for fresh-cut bouquets and cheerful flower arrangements.

Now, this plant is a lily hybrid, so there are no “true” Stargazer lily species. The most common varieties of this particular hybrid are pink, golden, and white Stargazer lilies.

However, there are many similar cultivars of Oriental and Asiatic lily hybrids. Here are some of the most popular alternatives to Stargazer lilies:

The Stargazer lily got its common name because the bloom faces upwards, toward the stars. The creator of these flowers wanted to highlight that the plant didn’t grow facing down like other lily varieties. Its genus name Lilium is the Latin plural version of the word lily.

What Regions Are Stargazer Lilies Native to?

The Stargazer lily is a cultivated hybrid species, so it isn’t native to any particular region. Its originator first grew the flower in California in the USA.

However, some similar lily varieties have Asian roots. For example, Lilium longiflorum is native to Taiwan and Japan. Additionally, the Lilium henryi, also known as the Tiger lily, is native to mountainous regions of China.

When Are Stargazer Lilies in Season?

Simply put, Stargazer lilies thrive in the summer months. The flower will bloom anytime from early to late summer, depending on your area’s climate and when you planted the flowers.

Uses and Benefits of Stargazer Lilies

Now, the Stargazer lily is primarily grown for ornamental purposes. It’s popular as a cut flower for creating bold and vibrant flower bouquets and arrangements.

Unfortunately, this plant is toxic to cats. It can cause problems like lethargy, vomiting, and even kidney failure. However, the flower isn’t known to cause issues for humans or other animals.

The Stargazer lily is not typically used in food or drinks. Nor does it have well-known uses in herbalism or medicine. But its bold color and fragrance are useful for attracting pollinators like butterflies.

The Meaning, Symbolism, and Cultural Significance of Stargazer

Stargazer lilies come in various colors, each with its own unique meaning. Here are some of the most common Stargazer lily colors and their symbolism:

Given this flower’s short history, they aren’t many myths or pieces of folklore associated with the Stargazer lily. However, in some cultures, lilies are seen as a gesture of sympathy after loss.

Due to its associations with purity and innocence, the white lily is often used in funerals to represent the departed loved one. Additionally, some cultures use the lily as a symbol of reincarnation. So, it is common to see the flower in ceremonies honoring the dead.

Despite the lily’s use in funerals, most people see Stargazers as symbols of life, wealth, and abundance. This flower is also popular for Easter arrangements and decorations.

Now, Stargazer lilies are such a new hybrid species that they don’t have references from cultures like Ancient Egypt, Greece, or Rome. Additionally, the flower did not have a meaning in the Victorian language of flowers.

However, the lily family has a long history and cultural significance. For example, as far back as the Egyptian and Assyrian empires, the lily represented sovereignty and innocence. Additionally, frescos in Crete dating back to 1600 and 1500 BC depict flowers that resemble lilies.

This is why it’s common to see Stargazers in bouquets around the Easter holiday. Additionally, white Stargazer lilies resemble other lily varieties. So, they make a popular choice for funerals and celebrations of life.

You can give Stargazer lilies as a gift on various occasions. It makes a suitable addition to an arrangement for Mother’s Day, Easter, birthdays, and anniversaries. The flower is also a lovely choice for funerals and celebrations of life.

What do Stargazer lily flowers symbolize?

The Stargazer lily is most commonly associated with life, abundance, and resurrection. It is also seen as a symbol of wealth and prosperity.

There is no well-known connection between the Stargazer lily and luck. However, given the plant’s associations with abundance, many see this hybrid flower as a sign of good fortune.

Do Stargazer lilies come back every year?

Stargazer lilies are perennial bulbs. That means you can plant them in your garden and enjoy beautiful blooms year after year.

How long do Stargazer lilies last?

Fresh-cut Stargazer lilies can last up to two weeks with the proper care. To extend the life of your Stargazer lilies, keep them in a sunny spot and make sure to change the water in their vase every few days.

Do Stargazer lilies flower more than once?

Typically, Stargazer lilies only flower once during their growing season. They will bloom for two to three weeks before their flowers fade.

Now that you know all about the meaning of stargazer lilies, why not buy a bouquet for yourself? They’re elegant flowers sure to add a striking focal point to any indoor space. Whether for home or as a gift, knowing this flower’s meanings will make the purchase even more special. 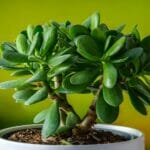 Where to Position Jade Plants in the Home (Essential Guide) 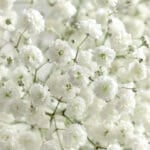