Everything You Need to Know About Zinnia Flower Colors

Zinnias are bold, bright annuals that bring pops of long-lasting color to the garden. These gorgeous blooms make brilliant cut flowers that can also brighten up your home. Zinnias come in a range of pastel shades, and some cultivars even have bi-colored flowers with intricate patterns. Each color also adds a subtle twist to the meaning and symbolism of zinnia flowers. In this article, we’ll take a look at what colors zinnia flowers come in and investigate the symbolism of each color.

The Zinnia genus belongs to the daisy family (Asteraceae) and is part of the Heliantheae or sunflower group. Horticulturalists recognize 22 species of zinnias, including Zinnia elegans and Zinnia angustifolia. These two species, along with Zinnia haageana, are used for breeding a colorful array of zinnia cultivars.

Zinnias are mainly native to Mexico, but some species come from Central and South America and the Southwestern United States. These flowers grow pretty happily in arid, sunny conditions in these areas. Primarily, zinnias are found in habitats such as grasslands, shrublands, or prairies.

Zinnias are flowering annuals that grow in clumps, although some species grow as sub-shrubs or shrubs. Zinnia flowers emerge from tall, stout stems, with each stem supporting a single bloom. Most zinnias grow between 1 and 4 feet tall, but dwarf cultivars usually reach between 4 and 12 inches tall.

Zinnia flowers can be single, double, or semi-double, with banks of overlapping petals surrounding central florets. These flowers come in several pastel shades, including pink, purple, orange, red, green, and white. Most zinnia varieties have a long flowering season lasting from early summer until the fall frosts. Organic pesticides are beneficial throughout the growing season to ward off common zinnia flower pests and diseases.

Zinnias are also non-toxic for humans and pets, so you can safely grow them if you have cats or dogs.

Zinnias make fantastic cut flowers (in addition to dried and preserved flowers) because they have sturdy stems and can last up to 12 days in a vase. Single or semi-double zinnias also attract beneficial pollinators such as bees, butterflies, hoverflies, and hummingbirds. Keep in mind that most insects will struggle to access double-flowered zinnias.

Zinnia flowers are also edible and can be used as salad garnishes, although they do have a slightly bitter flavor.

The Zinnia genus was named in honor of the 18th Century German botanist Johann Gottfried Zinn. Zinnias are also as well traveled as their namesake – zinnias were the first flowers grown in space! A team of scientists stationed on the International Space Station successfully grew an orange zinnia in 2016.

Zinnias are low-maintenance plants that are easy for everyone to grow. These flowers need approximately 6 hours of full sunlight daily and fertile, well-draining chalky, loamy, sandy, or clay soils. In addition, Zinnias do best when watered about once a week. Deadhead spent flowers during the blooming season and boosts flower production by fertilizing once every one or two weeks.

Pink is a popular and common zinnia color, and pink zinnias have a range of meanings and symbolism. In the language of flowers, pink zinnias traditionally symbolize love and affection and are usually linked to the love between friends. What’s more, pink zinnias also represent gentleness and grace, making them excellent floral gifts for close friends.

Varieties of pink zinnias include:

Purple zinnias have a dramatic, regal appearance thanks to their rich magenta or violet petals. Like many purple flowers, purple zinnias symbolize elegance, royalty, and success. The Victorians used magenta or purple zinnias to communicate desire and romantic love to lovers, spouses, or prospective partners.

Some popular purple zinnia varieties include:

Orange zinnias are fiery, bold flowers with various symbolic meanings. Most commonly, orange flowers can represent energy and power, ambition and success, or enthusiasm and positivity. According to the Victorian flower language, orange zinnias communicate love to friends. Orange zinnias can also symbolize bonds between family and friends.

Like other red flowers, red zinnias represent love, beauty, and passion. Red zinnias can also symbolize good health and success. The Victorians believed that giving someone a red zinnia conveyed your desire and romantic feelings for them.

Yellow zinnias have strong associations with friendship. According to Victorian symbolism, yellow zinnias were messages of platonic love and affection for friends. If you missed one of your friends, a yellow zinnia was seen as the perfect way to let them know. Yellow zinnias can also represent energy and joy.

Here are a couple of yellow zinnia varieties:

White zinnias symbolize purity and peace and can also represent elegance, healing, and recovery. In Victorian flower language, white zinnias were used to declare affection for friends. White zinnias were also associated with friends who were missing each other.

Some popular white zinnia cultivars include:

Zinnias are available in seven beautiful pastel or bright colors such as pink, purple, orange, and green. Zinnia flowers can be single, double, or semi-double, and some are even bi-colored. Each zinnia color is rich with meaning and symbolism, providing plenty of choices for flower bouquets or gifts. In most cases, red and pink zinnias represent romantic love, while yellow and white zinnias symbolize platonic affection. 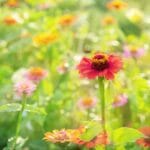 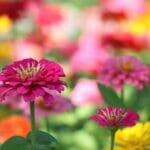