If you’ve been dreaming of luscious white or blue blooms as a backdrop in your summer garden— then you’ve probably considered planting a hydrangea or two. These hardy deciduous shrubs are a great choice for partly-shaded gardens with rich, well-drained soil. If you’ve got a spot in your garden that’s calling for a hydrangea, keep reading. This is our list of everything you need to know about the seven most common types of hydrangea in the US. 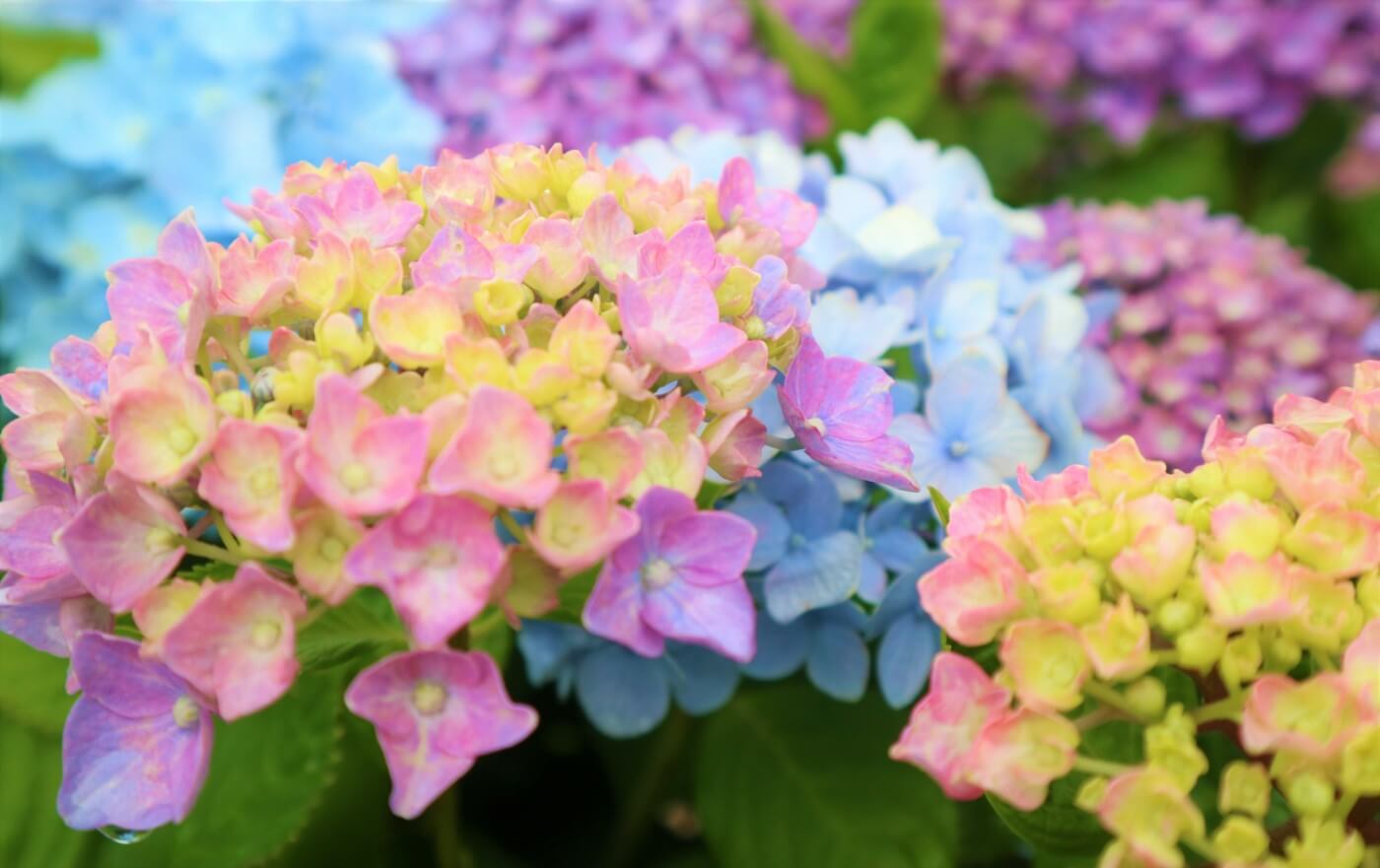 With a variety of flower colors and shapes to choose from and a host of uses and benefits, it’s easy to find a hydrangea that you love. Beyond their initial bloom color, several varieties on this list even offer evolving colors with the seasons—flower clusters that turn from white to pink, or dark green leaves that become red in the fall.

Also known as French, Japanese, or Snowball hydrangea, Bigleaf hydrangeas (Hydrangea macrophylla) are a popular choice among gardeners all over the US, especially in coastal parts of the Eastern states where the acidic soil allows for bright blue clusters of flowers. These beauties can grow anywhere from three to eight feet tall, and average around four feet wide.

In today’s hydrangea-loving nursery trade, there are over 500 cultivars of Bigleaf hydrangea divided into two main groups: the hortensias, which have large snowball-like flower clusters, and the lacecaps, which typically have more flat-topped clusters. Regardless of which kind you get, most bigleaf hydrangeas have similar needs in the garden when it comes to light and water.

In general, Bigleaf hydrangeas will flourish in zones 5-9, and prefer morning sun, afternoon shade, and moist, well-draining soil. Planting sites that are too exposed or too hot and dry should be avoided.

Many hydrangeas seem to enjoy partly shaded locations under trees and next to houses, and regular waterings between rain showers. You might also consider adding a general-purpose fertilizer to the base of your hydrangeas in the months leading up to their bloom time (generally late spring through early summer which is also the best time to consider transplanting or propagating hydrangeas if you’re looking to expand your collection).

Pruning should be done once flowers begin to fade, but not too late in the season. Bigleaf hydrangeas begin forming their blooms for the following season in late summer, so avoid pruning too late or you risk damaging the following summer’s bloom potential.

When it comes to which color hydrangeas you’re able to grow, this will all depend on the pH of your soil, and how much aluminum is present. For acidic soils (pH of 5.5 or lower) which contain more aluminum, blooms will often be blue. For more neutral or alkaline soils (pH of 7.0 or higher), flowers are more pink.

It’s worth noting that hydrangeas are considered toxic, so it’s prudent to wear a pair of gardening gloves throughout the process.

Another variety of the Hydrangea macrophylla, Lacecaps have different flowers, but very similar growing requirements. Unlike the beloved Snowball hydrangeas, Lacecaps have flatter-topped flowers that are made up of a disk of smaller flowers, outlined by larger showier ones. They’re hardy in zones 6-9, and many hydrangeas varietals can reach six feet tall (and wide) at maturity, and depending on your soil— may bloom in blue, white, or pink.

Much like the snowball hydrangeas, Lacecap hydrangeas prefer regular waterings in well-draining soil. Muddy soil that keeps their roots too wet will spell disaster. Part-sun locations (with a preference for morning sun) are best. Annual fertilization earlier in the season with a balanced 10-10-10 formula will help your lacecap to flourish during the summer, and regular deadheading will encourage blooms all season long. Unlike other varieties of hydrangeas, Lacecaps can withstand intense pruning, so if you have one that hasn’t bloomed in several years, consider cutting it back by about ⅓ during the winter season to encourage fresh growth the following year.

A smaller, more delicate variety of hydrangea, Mountain hydrangeas (Hydrangea serrata) are native to parts of Korea and Japan, hardy in zones 6-9, and typically grow two to four feet tall and just as wide. These shrubby plants have a rounded appearance and produce lacecap flowers in a variety of colors. Probably the most unique quality of Mountain hydrangeas is their ability to change colors three to four times throughout the bloom season (which runs from early to late summer).

This variety of hydrangea also prefers part shade and rich, moist, well-draining soil. Although vulnerable to cold, they’re better able to withstand early spring frosts than some other varieties on this list. That being said, they do appreciate a healthy coating of mulch, and will bloom more continuously if deadheaded throughout the growing season.

The widely branched Smooth hydrangea (Hydrangea arborescens) is known for its creamy white flowers that bloom nearly continuously from early summer to fall. Hardy in zones 3-8, these shrubs can grow three to six feet tall, and just as wide.

Smooth hydrangeas can take full sun, but will prefer part shade in hotter climates. Unlike other hydrangeas on this list, Smooth hydrangeas are actually relatively drought-tolerant and will thrive in average, medium, or well-drained soils. Because of their full appearance, these shrubs are a great choice for hedges and backdrops. Smooth hydrangeas grow on new wood, so pruning should take place in late winter or early spring to encourage new growth and blooms.

This cold-hardy hydrangea is an easy choice for gardeners in zones 3-8, who are looking for a reliable bloomer. The Panicle hydrangea (hydrangea paniculata) forms large conical lacy flower clusters and blooms continuously from midsummer to fall.

The Panicle hydrangea enjoys full sun to part shade, and will thrive in rich, medium-moisture, well-draining soils. This variety is known for its cold-hardiness, and ensures harsh winter climates much better than other types of hydrangea. An added bonus of this variety is its XL size— with average growth rates between eight and twenty feet tall and six to eight feet wide. This enormous stature makes it an easy choice for privacy hedges and backdrop shrubbery. Another perk of this variety is the way in which the colors of its foliage and flowers evolve with the season—with blooms turning from white to pink and green leaves becoming red in the fall. Panicle hydrangeas are best pruned in late winter or early spring, as blooms appear on new growth at the beginning of each season.

As the name would suggest, the leaves of the Oakleaf hydrangea (Hydrangea quercifolia) strongly resemble those of an actual oak tree. Hardy in zones 5-9, the Oakleaf hydrangea offers a near-constant display of color, with extra large conical white blooms that can reach up to 12 inches and turn rosy-pink at the end of the season, and dark green leaves that turn deep red by fall. The plant itself can grow up to six to eight feet tall and just as wide.

The Oakleaf hydrangea will grow in full sun or part shade, and prefers acidic, moist, well-drained soil. It can thrive in dry conditions, but will prefer part-shade in hotter climates. This type of hydrangea is also stoloniferous—meaning it will spread via horizontal shoots that form new roots and top growth. Because of its spreading abilities, this variety of hydrangea is best planted at the outer edges of your garden or as a border plant on the edge of a forest.  For the smaller garden, consider a dwarf variety like the ‘Pee Wee’ which has all the same magnificent foliage in a much smaller (usually three to four feet tall) package.

Another hydrangea true to its name, the Climbing hydrangea (Hydrangea petiolaris), is a vigorous climbing variety that grows vertically and clings to surfaces via its aerial rootlets. With similar blooms as the Lacecap hydrangea (small in the center and more showy on the outer edges), these fragrant, flat clusters begin as green-white buds and blossom into pure white flowers against rich, dark green leaves.

Hardy in zones 4-9, these climbing perennials enjoy full shade and rich, well-drained soil. They may tolerate full sun if constant moisture can be provided. When given adequate surface area to climb (such as the side of a building or a large trellis), the Climbing hydrangea can reach 30-40 feet tall and five to six feet wide. Unlike other varieties, the Climbing hydrangea does not require annual pruning, except when needed for controlling the direction of its climb. If you do wish to prune it, do so directly after blooms begin to fade.

With so many different varieties of hydrangea to choose from, it can be difficult to know which one is right for your garden. The best way to pick out your perfect hydrangea is by choosing a variety that will be happiest in your grow zone, and one that will work in the environment provided by your garden. Keep in mind that bloom colors will vary based on the condition of your soil, and east-coast hydrangeas with blue blooms might not be available in less acidic western soils. Regardless of the colors it produces, a well-placed hydrangea is sure to provide the perfect backdrop or border hedge for just about any garden—especially if you can provide the light and water it needs to thrive!

To enjoy the fruits of your labor for longer, see our essential guide to drying and preserving hydrangea flowers and how to cut hydrangeas for a vase or bouquet arrangement. 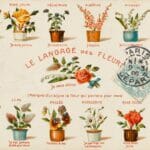 Ultimate Guide to Floriography: The Language of Flowers 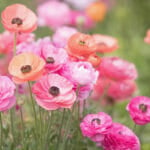