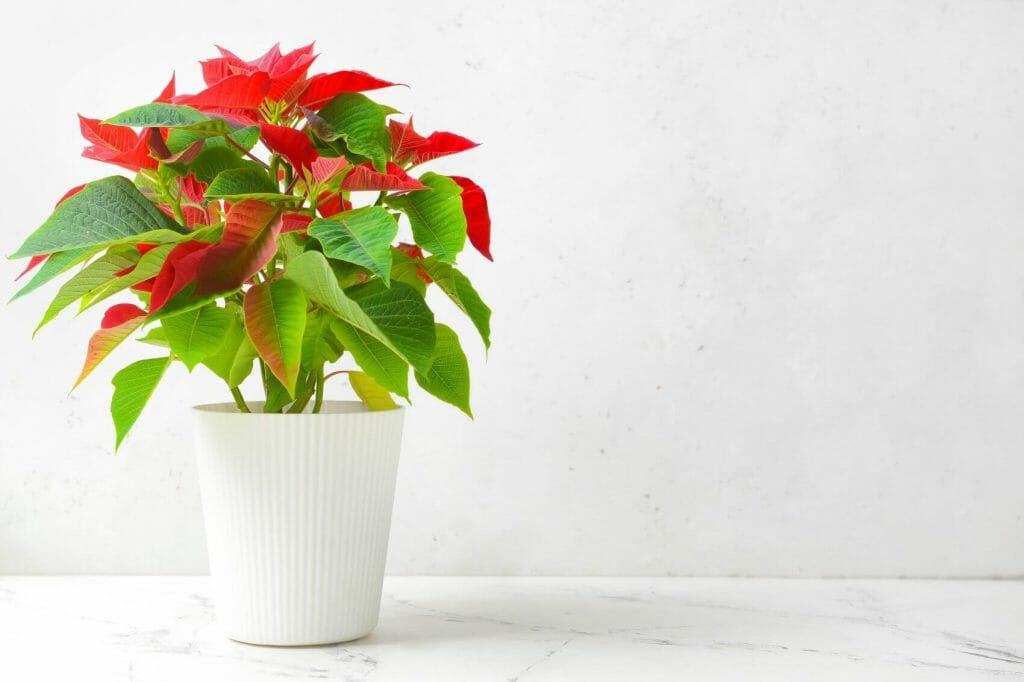 The Best Red Houseplants for Your Home or Office

There’s no better way (in our opinion) to bring color into your home than with brightly colored, red houseplants. There are an endless variety of red houseplants to choose from, ranging from beginner plants to some that are better left to expert growers. We’ve rounded up a list of some of the absolute best (prettiest, most interesting, easiest to grow) for you to see here!

When the color red appears on plants, flowers, or in life, it usually represents love, romance, passion, or fiery feelings like anger. Since red runs through all of our veins, it can also symbolize blood and sacrifice. Some red plants have symbolic meanings of their own like cheerfulness, hospitality, and good luck.

Here you’ll find 20 of our favorite red houseplants that will thrive in a range of living environments. We’ve included a brief care guide for each so you can find the perfect pick for your own unique living environment.

When you imagine a tropical flower, it’s likely that a hibiscus blossom comes to mind. Hibiscus flowers range in color from bright whites and creams to yellow, peach, oranges, pinks, and red. Several species of red-colored, flowering hibiscus shrubs exist, but the Hibiscus rosa-sinensis is one of the most popularly grown, and it’s the best for growing indoors. Also called the Hawaiian hibiscus or Chinese hibiscus, this flowering plant has an exotic-looking flower with papery red petals, a fiery stamen, and a dusting of bright-yellow pollen.

The fittonia is widely loved as a houseplant for its strikingly marked leaves. As red or white vein lines run throughout its foliage. Thanks to the appearance of its leaves, the fittonia is also commonly called the nerve plant or mosaic plant. Fittonia is native to the rainforests of South America, where it has been traditionally used as a pain reliever and psychedelic.

The Vriesea splendens is commonly called the flaming sword plant for its fiery red, spike or sword-shaped inflorescence that resembles a flaming sword. A member of the bromeliad plant family, the flaming sword features a rosette of sturdy, lance-shaped leaves that also feature quite attractive stripes of light and dark shades of green.

Commonly referred to as both the rojo Congo philodendron (sometimes Congo rojo philodendron) and red Congo philodendron, this plant boasts large, paddle-shaped leaves that are glossy and a deep-burgundy red in color. This plant grows naturally in South American, and unlike other philodendrons in its family, it does not climb or vine. Instead, its leaves self-head atop their stem, growing straight upward and outward.

Native to Central America, parts of the Caribbean, and much of South America, anthuriums are epiphytes, which means that grow on other plants – rather than in the soil – and gather nutrients from the air, rain, and other debris as it gathers around them. Although you’ll find them commonly growing from the bark of trees in the wild, they can thrive indoors in a potted environment, too. Their brightly-colored blooms look like shiny, hearts and represent hospitality.

Although well-known for its cherry-red coloring, the poinsettia’s crimson, leaf-like structures are actually bracts that surround its much-smaller true flowers upon blooming. In their native environments (Mexico and parts of Central America), poinsettias grow into large trees or shrubs. The classic winter season plant, poinsettias are a popular holiday purchase that many owners struggle to keep alive throughout the rest of the year. With the right care, however, it can be done!

You’ve likely run into a moon cactus or ruby ball cactus at your local garden center or grocery store flower shop. These attractive cacti are the Frankensteins of the flower department because they’re actually comprised of two plants grafted together: the red-colored portion and the green portion of the cactus. The brightly colored part of the plant could not survive on its own because it has mutated to lack chlorophyll, which eliminates all green cells and reveals its bright color.

Euphorbia milii is commonly called the Christ plant or crown of thorns plant because its older growth stems are covered in sharp, spiky thorns that resemble depictions of the crown of thorns Christ has been artistically depicted wearing. This succulent plant is native to Madagascar and is admired for its attractively colorful bracts which surround its much-smaller blossoms. These bracts are typically bright-red or pink in color and are less often colored white.

We’ve already mentioned one species of bromeliad (the flaming sword), but Bromeliaceae is actually a family of plants that contains thousands of species of bromeliads. One of the most popular is the pineapple! Many bromeliads also produce a central inflorescence in bright-red, red-orange, and other shades of the fiery hue. Some bromeliads even have reddish or maroon-colored foliage, and that’s why the plant family is on this list.

Elephant ear is the common name given to plants belonging to the Caladium genus because they produce large, broad, heart-shaped leaves that resemble an elephant’s ears. There are thousands of varieties of elephant ear plants, and many of them produce striking red-colored stalks, pure-red foliage, and even bi-colored leaves of red and green.

If you enjoy pops of color, then you’ll love coleus plants. While there are several species, the ones with the showiest colors and patterns are cultivars of Coleus scutellarioides. The colors and markings on these leafy beauties truly stand out with the most vibrant coleus leaves featuring a center of saturated, bright-red or magenta surrounded by deep maroon and rimmed in neon-green. Plus, the colors last throughout the year!

Iresine is a genus of flowering plants that contains about 30 species. Also called bloodleaf plants, beefsteak plants, and chicken gizzard plants likely due to their bright colors and unusual leaf markings. Every part of an iresine plant is so vibrantly colored that it almost looks spray-painted. Different species’ colors range from vibrant violets and pinks that look like they would glow under a black light to deep ruby and blood-red.

About 125 species of these flowering tropical succulent plants grow natively in Madagascar and tropical parts of Africa. They feature broad, waxy, paddle-shaped leaves and bloom year-round with clusters of miniature flower blossoms in shades of red (of course), pink, orange, yellow, and white. The Kalanchoe pinnata is particularly well regarded for its small bell-shaped blooms. Fun fact: kalanchoe was one of the first plants ever sent to space.

The Begonia genus contains about 1,800 species of perennial flowering plants that produce some pretty-impressive showy blossoms that outshine their attractive, deep-green foliage. Begonia flowers grow in many shades of yellow, orange, pink, white, and red. If you’re looking to grow the prettiest varieties of red begonias look for hybrids and cultivars of the Begonia semperflorens.

The triostar is no ordinary green houseplant. While it’s not recommended for beginner green thumbs, its beauty is truly worth the effort of giving this plant everything it needs to look its best. Like the tristar’s similar-looking cousins, calathea plants, triostars belong to the prayer plant family (Marantaceae), and its leaves fold upward at night and outward at sunrise. However, this plant is most loved for its beautiful leaf patterns that feature bright-green variegated with creamy splashes that glow pink with red-colored leaf undersides.

African violets are a favorite of plant enthusiasts and houseplant collectors everywhere. They’re relatively easy to grow once you get the hang of it, and there are countless cultivars and hybrids available, offering endless variety and beauty. While purple, pink, and white varieties are popular, red African violets, like the Visavi and Vega African violets, are absolutely stunning.

Hippeastrum is a genus containing about 90 species and more than 600 hybrids/cultivars of flowering bulbous plants. This genus is classified under the Amaryllidoideae plant family and its members are often sold and referred to as Amaryllis flowers. However, Amaryllis is a separate genus of flowers. In addition to Amaryllis, hippeastrums are also commonly called Christmas roses, fire lilies, and Barbados lilies. Despite the confusion around naming conventions, hippeastrum flowers are lovely to grow and can commonly be found around the holidays in lovely forced bulb vases.

Persian cyclamen is a species of flowering perennial native to Palestine, Lebanon, Syria, and Southern Turkey in addition to particular regions of Northern Africa and a few Greek islands. This lovely plant starts blooming in autumn and doesn’t stop until late spring. It has shooting-star-shaped flowers and a rosette of pretty, heart-shaped leaves.

Select the Best Red Houseplant for Your Home

Before choosing a red plant, consider the plant’s toxicity, if you have pets or small children in your home. Next, evaluate your home’s environmental conditions – average temperature, humidity, and sunlight – to ensure your plant has what it needs to look its best.

Why do plants turn red?

Red leaves most commonly occur due to a pigment known as anthocyanin. This pigment absorbs light into the cell structure of the foliage causing various shades of the color red to occur.

What plants have red leaves?

There are numerous plants that showcase an array of vibrant red colors in their foliage. Some of our favorite red houseplants include Persian Cyclamen, Amaryllis, Red Begonia, Kalanchoe, Red Moon Cactus, Aglaonema, Hibiscus, Anthurium, and Red Congo Philodendron.

What is the meaning and symbolism of red plants?

How much sunlight do red houseplants need? 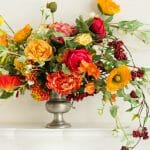 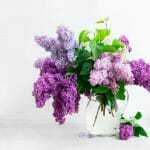