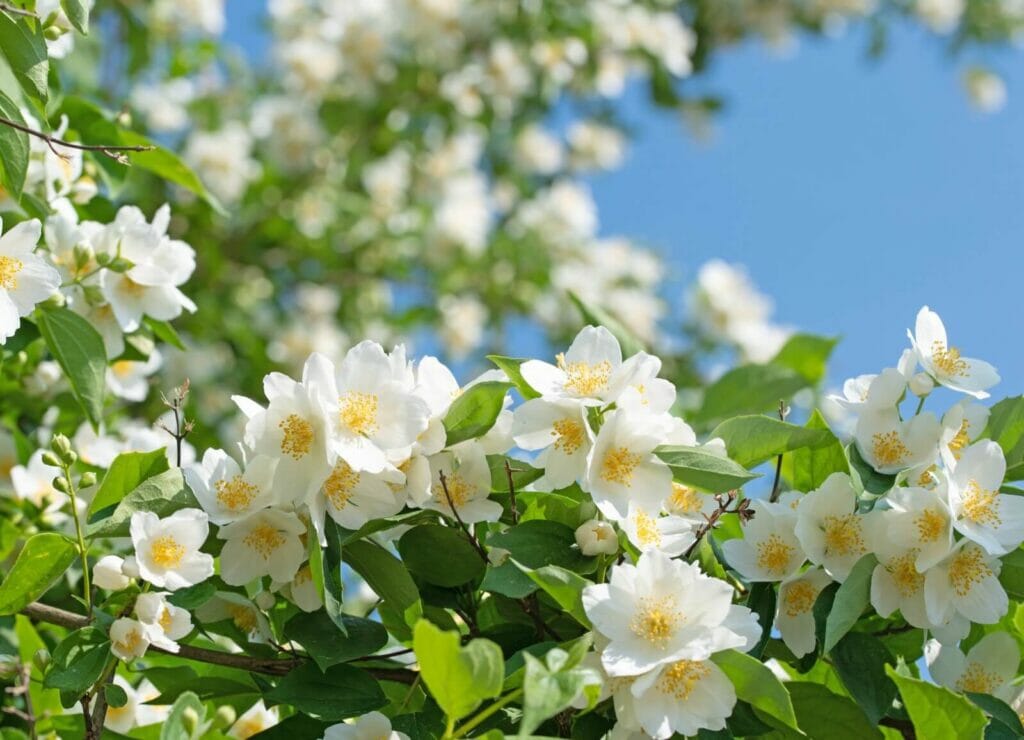 Popular Types of Mock Orange Prized for their Color and Fragrance

Mock oranges (Philadelphus) are popular landscaping plants. They are commonly grown in gardens and parks because they are both beautiful and easy to care for. In addition to their pleasant fragrances, they are fast-growers and are beloved for the copious blossoms they reliably produce in spring. During autumn, the leaves change to a vibrant lemon-yellow, putting on a second attractive display. This guide will take you through 18 popular mock orange varieties, including their flowering season, growth expectations, colors, fragrances, and native range.

Philadelphus is a genus of about 60 species of mainly deciduous flowering shrubs that belong to the Hydrangeaceae plant family. Plants of the genus are primarily native to North America, Central America, and Asia. A few species can also grow naturally in small parts of southeastern Europe.

Plants of this genus are commonly referred to as “mock orange” due to the look of their flowers. The flowers feature snowy-white, fluttery petals and fuzzy centers of yellow stamens. These blossoms closely resemble the blossoms of orange and lemon trees.

The name also refers to the scent of the flowers. Several species of mock orange plants produce flowers that have intense citrus or jasmine-like fragrance. Mock orange flowers are also rich in meaning and symbolism.

Mock orange aureus is a cultivar of one of the few species of mock orange plants (commonly called sweet mock orange) native to Europe. This variety of mock orange is attractive when it’s blooming and when it’s not in bloom, thanks to a display of bright-yellow leaves that first appear in early spring.

Mock orange belle etoile is a variety of a hybrid species of mock orange. ‘Belle Etoile’ has earned the Royal Horticultural Society’s Award of Garden Merit. Compared to most other species of Philadelphus, ‘Belle Etoile’ boasts a more intense fragrance, larger flowers, and a longer blooming season.

Variegated mock orange is a cultivar of the Philadelphus coronarius species native to southeastern Europe. This variety of mock orange is notable for its particularly striking foliage. Its leaves are ovate and pointed in a medium-green hue. The leaves are rimmed with irregular borders in a creamy white color. When in bloom, white cup-shaped flowers appear in abundant clusters all over the shrub.

Native to the northwestern United States, this particular species has a unique place in American history, as it was first scientifically collected by Meriwether Lewis on the Lewis and Clark Expedition in 1806. It is also the state flower of Idaho. Lewis’ mock orange is a large deciduous shrub. Its flowers are long-lasting and emit a sweet orange-like fragrance with a unique hint of pineapple.

Virginal mock orange is another multicontinental hybrid cultivar variety. It features ornate double flowers that are more elaborate than other varieties of mock orange. This mock orange is also a rather tall and fast-growing variety. So, it gains height quickly and makes an excellent addition to the back of a garden, where it can add height, depth, and visual interest throughout the spring, summer, and fall.

Cultivars of the Philadelphus x lemoinei species typically have a more intense fragrance, larger flowers, and slightly longer blooming times than other mock orange types. This hybrid is also a more compact variety of mock orange, making it a suitable choice for smaller garden spaces.

Sweet mock orange is the common name for the Philadelphus coronarius species of mock orange. It is native to southeastern Europe and widely cultivated around the world. This particular species has a powerful and sweet scent. It also has several popular garden hybrids. The fragrance of hybrids of this species, however, is not nearly as strong as the original.

Native to Korea, southeastern Russia, and northeastern China, this species of Philadelphus is commonly called Korean mock orange. It produces clusters of large, white flowers that are about 1 1/2 inches across, with 5 to 7 flowers per cluster. When in bloom, these shrubs are highly fragrant and covered with a proliferation of blossoms.

They are a good choice for planting a new hedgerow thanks to their fast growth. However, the leaves are deciduous and will only provide real privacy during the growing season.

One of the few species of mock orange plants native to Europe, the Philadelphus caucasicus hails from the Caucasus. Growing up to 12 feet tall and wide, this species of mock orange is a large deciduous shrub that produces vibrant-green, ovate leaves and spindly racemes of delicate, white flower blossoms. To take full advantage of the Caucasus mock orange, be sure to plant it in a spot with plenty of room to accommodate its rapid growth.

This species of Philadelphus is native to the southeastern United States. Although it is not typically considered a prized garden plant due to no particularly unique ornamental value, it has attractive, ovate foliage and creamy white flowers that blossom along arching branches.

This species gets its common and scientific names from the noticeable white hairs that grow from its leaves and stems. These fibers give the species a hairy look that sets it apart from other species of mock orange.

A cultivar of a hybrid, the Philadelphus x virginalis ‘Snowbelle’ was cultivated for showing off. It has highly ornate and almost fuzzy-looking double flowers that bloom in circular clusters surrounding central racemes.

The fragrant white flowers look similar to snowballs, and perhaps this is where the species gets its name – praise for being a true snowy-white beauty. As a more compact variety of mock orange, the Snowbelle is also more versatile when it comes to filling up a garden, as it can fit into smaller spaces than its much larger cousins of the genus.

Philadelphus microphyllus is native to the desert regions that span south to northern Mexico and north as far as Wyoming. This species of mock orange is notable for its small leaves and flowers that mostly bloom singularly or sometimes in clusters of two or three. Thanks to this species native range, it is highly drought-tolerant, making it a popular choice for low-maintenance and low-water-use gardens.

Hoary mock orange is a species native to the eastern United States. This perennial, deciduous shrub produces copious clusters of large, frosty-white flowers. Each is about two inches in diameter and has four upturned petals and a clutch of yellow stamens at the center.

During the peak of its blooming season, the shrub will be almost entirely covered with fragrant white flowers. They are strong attractors of pollinators such as bees and butterflies.

This variety of mock orange is a cultivar of a species native to Mexico and Guatemala. This variety has a spreading growth habit and white flowers with pinkish-lavender markings at their centers.

Syringa is actually the genus name of the plants we commonly call lilacs. Although the two genera are not closely related, the confusion between the naming conventions arose during the 16th century when species of both Philadelphus and Syringa were commonly imported into European gardens together.

This particular species produces 2-inch flower blossoms in, of course, white. Setting them apart from other mock orange flowers, the large blossoms have centers that blush pink beneath the classic spray of yellow stamens.

The Philadelphus ‘Erectus’ is a variety of mock orange that grows with a predominantly upright, erect habit. Its branching arms are covered with petite, ovate leaves in a rich, green hue. When in blossom the branches produce delicate white flowers that are each about 1 inch in diameter. Although the flowers are small, they are abundant and highly fragrant.

This cultivar, known as Philadelphus ‘Sybille’ or mock orange ‘Sybille’, produces single, white, cup-shaped flowers that deepen into creamy purple shadows at their centers. The flowers are highly fragrant and visually striking at about 2 inches in diameter, as they stand out elegantly against a backdrop of deep-green foliage.

Mock orange ‘Starbright’ is another hybridized cultivar of various species of Philadelphus plants. This particular hybrid was created at the Memorial University Botanical Garden in Newfoundland. This particular variety has fragrant, white flowers and deep-green, ovate foliage like so many species of mock orange. However, this hardy hybrid was created to fare particularly well in colder climates than its cousins. As a zone 3 plant, it can survive winters that get as cold as -30 to -40°F.

Which is the strongest scented Philadelphus?

Philadelphus lemoinei, Philadelphus purpurascens, and Philadelphus microphyllus are thought to have the most fragrant flowers of all the mock orange species.

Is Philadelphus the same as mock orange?

Yes, Philadelphus is a genus of about 60 species of flowering shrubs that are commonly called mock orange.

Mock orange plants can thrive in USDA growing zones 4 through 8. They prefer to be planted in well-draining soil in areas where the light ranges from full sun to partial shade.

Yes, Philadelphus plants only produce flowers on old growth. If you prune your mock orange plant, be sure to do so early in the season so that it has enough time to grow and produce branches that will flower the next year.

Philadelphus plants are fast-growing. In good growing conditions, they can grow about two feet in a year.

Many types of mock oranges can make an excellent addition to any garden. Given the right growing conditions, it’ll grow fast and quickly reach several meters in height. These lovely plants are not only low-maintenance, but they’ll fill your garden (and your nose) with beauty every spring through autumn. 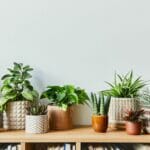 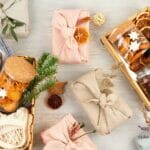 23 Best Gift Baskets in Miami, FL (For Every Occasion)