When Are Peonies In Season? (Essential Guide)

Everything You Need to Know About Peony Flowering Season

Peonies are one of the most popular ornamental perennials on the market. Whether grown for their cut flowers or simply as border plants to enjoy in your beds, there is a Peony variety for every type of gardener. These plants are known for their incredibly short season, especially for the most sought-after types. In this guide, we’ll cover the specifics of when peonies are in season and what you can do to make it last as long as possible.

When Are Peonies in Season? – The Essentials

Peonies flower in late spring and into summer, generally from April to June. Blooming time will depend on the type and variety chosen and the region, planting time, care, and age. Plant different peony types and varieties together and give them the proper care to extend the season as long as possible.

The Peony genus is known as Paeonia, the reason these flowers are also commonly spelled Paeony. They are so unique and special that they have their own plant family – Paeoniaceae – with no other genera included.

Classified in 1830 by Friedrich K.L. Rudolphi, Peonies were believed to be related to other flowering plants with similar structures. Grouped under the same family, most closely related genera were moved to the Ranunculaceae family, leaving Peonies alone in their own isolated group.

Paeoniaceae is home to around 30 species. Scientists argue about the exact number but seem to have settled on 33 for now. The genus is widespread, with plants natively found in North America, Asia, and Europe.

Peonies’ native habitats are restricted to the northern hemisphere, explaining their affinity for colder weather. You can search for them in coastal mountain regions on several continents, with each species found in a particular region.

Today, they are one of the world’s most popular ornamental plants due to their rich meaning and symbolism, and detailed flowers in a wide range of delicate or striking colors. Many gardeners look forward to the short but beloved Peony season. As a bonus, peonies are also relatively easy to divide and propagate.

When Are Peonies in Season?

Like most ornamental flowering plants, Peonies begin flowering in spring. They wait until the latter part of the season to produce their stunning blooms. Most gardeners in the northern hemisphere can look forward to the first flush around late April.

Depending on the type chosen, the season will end around two months later, in June, just as summer begins to kick in. Many varieties will stop flowering even earlier – around May – while others continue to bloom through to the following season.

How Long Does the Peony Season Last?

Peonies are known for their unfortunately short blooming season. Many of the popular cultivars bloom for as little as a week, potentially extending that to 10 days if you’re lucky.

Some species will bloom for a full two weeks if given the right conditions. To preserve their blooms, these types need to be in shady areas and protected from the hot afternoon sun, and provided with a little nutrient boost through fertilizing. Without this protection, their season will be shortened.

Since these blooms are so beloved, horticulturalists have hybridized the Peony to produce a species that blooms for even longer. They can last from three weeks to a total of four weeks, giving you a whole month of flowers to enjoy.

Peonies are split into three types – herbaceous, tree, and Itoh or intersectional. The type you choose will significantly impact how long your plants bloom.

Herbaceous peonies have the shortest season, around 7-10 days. Unfortunately, this type is also the most popular, including common species like Paeonia officinalis and Paeonia lactiflora. They generally flower in May or early June, depending on the cultivar.

They rely on cold snaps to encourage blooming and can only be planted in cooler zones. The stems die back in winter and pop up again the following spring once the soil warms.

Tree peonies, like Paeonia suffruticosa, have a slightly longer season, capping off at 14 days. They are somewhat easier to grow and don’t require the same cold temperatures as herbaceous types to produce blooms.

The flowers are also far larger and the foliage sticks around all year rather than dying back at the end of the season. They are the earliest flowering type, emerging in April and sticking around until May.

Itoh Peonies are a new type developed by horticulturist Toichi Itoh from Tokyo in 1948. A new hybrid was developed with herbaceous characteristics and tree-like leaves by crossing the two types. They also produce many large flowers on one plant – as many as 50 per season.

They not only produce large and impressive blooms, but they also flower for the longest of all the Peony types. Intersectional Peonies have a 3-4 week blooming period and generally flower in June.

Once the season ends, these plants will die back to the woody growth when winter hits.

Within each of these types, there are also different varieties. Each one will have a specific blooming time, split into early season, midseason, and late-season varieties. These characteristics will help you identify when your chosen Peony is likely to bloom.

Herbaceous Peonies require cold weather to trigger flowering. The other two types also need a period of dormancy in winter with a temperature drop but do not require the dip to be as cold.

It’s essential to plant the right type for your region. If planted in the wrong area, you may see little flowering, or worse, no flowering at all.

Those in regions with colder winters in USDA Zones 2-8 should plant herbaceous Peonies. Those in warmer regions (Zones 4-9) are better off with intersectional or tree Peonies. Gardeners closer to the 7-9 Zone range should opt for Itoh Peonies that have a greater tolerance for warm weather.

Your region will also have an impact on the timing of your season. Peonies will appear far earlier in warmer areas as the change in weather triggers growth. They will pop up later than usual in very cold areas with late spring frosts.

Peonies will generally bloom longest in cooler, temperate regions than warmer ones.

As seasons shift and climates change, it’s also essential to keep an eye on the adjustments in your region. If spring comes sooner, planting your Peonies earlier will reproduce the right conditions and timing for maximum blooming.

Along with what you plant, when you plant also influences the blooming season. Peonies are typically purchased as bare-root plants, meaning they are dormant at the time of planting.

The best time to plant is in fall before the first frost hits. This date will differ depending on your region and location, so check your local weather resources before planting.

Planting in fall allows the plants to establish roots and adjust to the soil conditions early on, leaving them primed to focus on flowering by the time spring rolls around. This will maximize the potential blooming season, with all other factors equal.

You can also plant Peonies in spring. However, once planted, they will focus on establishing roots rather than flowering at this time. This dramatically shortens your first flowering season (if the plant flowers at all) and can also impact the following year’s flowering period.

To keep your plants blooming as long as possible from the outset, planting in fall is essential.

As with any flowering plant, the correct care will ensure you get the most out of your flowering season.

Herbaceous and intersectional Peonies need full sun for at least 5 hours per day to produce blooms. On the other hand, Tree Peonies prefer to be shaded in the midday and afternoon as the intense sunlight and heat can stress the plant, limiting blooming time.

They are not heavy water users and will do with a drink around once a week in spring and summer. This water is an essential component in photosynthesis, giving the plant enough energy to produce flowers, so the correct amount will have an influence on the blooming period.

Good drainage is essential as they cannot handle waterlogged soil, especially when they are dormant in winter. The soil should be loosened and amended with organic matter before planting to provide the right conditions.

For larger varieties, staking can also improve growth by supporting the weight of the large buds. Tie the stems loosely to a wooden stake to prevent them from falling over and snapping.

Peonies also require a bit of maintenance to cut back, prune, and deadhead each season.

Once planted, Peonies can last for many years in the garden – some for more than 50. You may have moved on from your current garden when the Peony lifecycle has ended. With the proper care and protection, these plants pop up year after year to bloom reliably.

In the first few years after planting, flowering can be sparse. Your season may be shorter as the plants continue to establish themselves and adjust to their new homes. But, that doesn’t mean this blooming period will continue forever.

As these plants age, they will flower more reliably for more extended periods. They are likely to produce more blooms that maximize the potential flowering time rather than disappear after a week or less.

You can enjoy these stunning flowers even longer each year with some patience.

Early season or Very Early season Peonies are preferred for those in warmer climates. This ensures the plants will bloom to their full potential before the temperatures get too hot to limit flowering.

Try these Early season Peonies if you live in warmer regions:

Midseason Peonies have an extensive range of bloom times, from Early Midseason to Late Midseason. There is plenty of variety in color, shape, texture, and type within this grouping, giving you plenty of plants to choose from.

Try these Midseason Peonies for a late spring display:

Late season Peonies are the perfect way to extend the flowering season. They are best for cooler regions as higher temperatures can shorten the blooming time.

Try these Late season Peonies for a colorful summer garden:

Tips for Extending the Season

Although they are considered short season flowers, there are ways to maximize the flowering potential of these stunning plants:

Although these garden favorites have a short season, there are ways to extend their blooms and enjoy them for as long as possible. Check your varieties, plant at the right time, and give them the proper care to ensure your Peonies season extends to its full potential.

For more, see our in-depth guide to growing peonies at home. 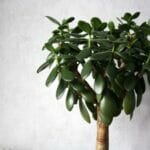 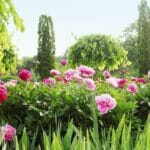 When Do You Cut Back Peonies? (Essential Guide)