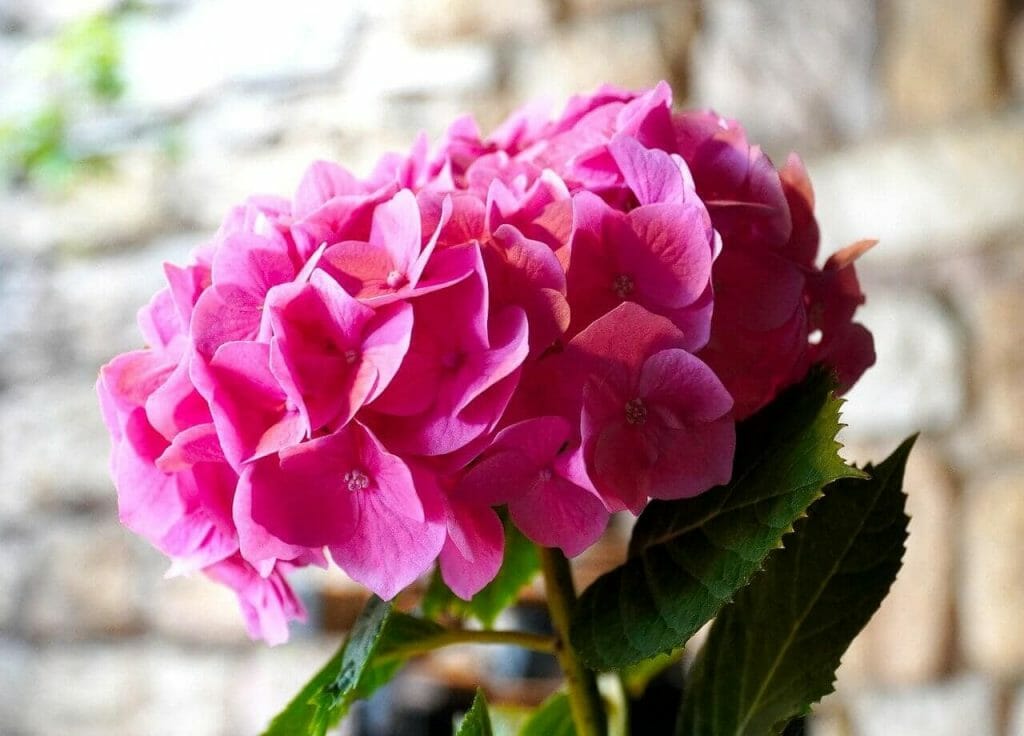 Everything You Need to Know About Hydrangea Flower Meaning, Symbolism, History, Origins and Cultural Significance

It’s no wonder why various cultures, religions, and flower language dictionaries have imparted a rich history of symbolic meaning of the beloved hydrangea flower. This beautiful flower is a favorite among florists and home gardeners everywhere. In this article, we’ll take you through everything you need to know about Hydrangea Flower Meaning and Symbolism, including their origins and history, uses and benefits, and cultural meaning and significance around the world.

About the Hydrangea Flower

Native to East Asia and North America, Hydrangea, also called Hortensia, is a genus of more than 70 species of blooming plants. Only about six of these varieties commonly grow in the United States, while much greater diversity can be found in Japan, Korea, and China.

Whatever form hydrangeas take, they’re most notable for their striking flower clusters. These bloom during the warm, rainy season from May through July, depending on the climate. Hydrangea flower heads feature both small clusters of flowers at the center and large, showy flowers around the outer edges. Depending on whether you have acidic soil or alkaline soil, hydrangea flowers range in color from green and white to pink, purple, and blue. They’ll also benefit from fertilizing a couple of times each growing season.

Each species can have a slightly different flower type. There are also specially bred cultivars, such as Endless Summer, that have plenty to offer gardeners.

If you hope to enjoy abundant blossoms and feed the bees at the time, get ahold of one of these hydrangea varieties to grow in your home garden. Find a spot with plenty of bright, indirect light and they’ll thrive. Most hydrangeas are also relatively easy to propagate if you’re looking to expand your collection.

Asia claims the greatest diversity of native hydrangeas. However, 45 to 65-million-year-old fossil records prove that hydrangeas are also native to North America. Hydrangeas didn’t make their way to Europe until a colonist brought them back from North America in the 18th century. Today, hydrangeas fondly fill gardens throughout Europe, Asia, Africa, and the Americas.

Hydrangeas are most loved for their ornamental use. With the plant’s great height and fullness, they’re brilliant in outdoor gardens. They’re also a favorite of florists because the lovely blooms add color, texture, and volume to floral arrangements.

Although most varieties of hydrangeas contain toxins, some parts of the plants do have a history of medicinal use. For example, hydrangea rhizome and root have been indicated as a possible treatment for problems concerning the urinary tract. Hydrangea root extract may increase urination, improving the body’s ability to clear infections of the kidneys, bladder, and urinary tract. It might also help prevent kidney stones.

However, you should always consult with your doctor before attempting to treat a medical condition on your own or before adding any new supplement to your health regimen. Like other herbal medicines, hydrangea root supplements have potentially dangerous side effects and can interact with other medications.

In both Japan and Korea, people dry and brew the leaves of the Hydrangea serrata to make a sweet, herbal tea.

Depending on the different color, the flowers can have different meaning. When giving hydrangeas as a gift, be mindful of the hydrangea color and be sure to choose the right one for your recipient to avoid a symbolically awkward situation.

Blue hydrangeas represent feelings of remorse and have long symbolized apology. They also signify feelings of understanding, deep gratitude and sincere emotion. Give these to a person whom you’ve wronged or to someone whose importance in your life you might have overlooked in the past.

Like blue hydrangeas, purple hydrangea flowers symbolize deep understanding. However, they carry this meaning without the notions of regret or apology. Instead, the added meaning of gratefulness makes this purple flower a wonderful option for a friendship or an enduring relationship. Additionally, purple is a traditionally regal hue. As a result, purple hydrangeas can also symbolize pride, royalty, and leadership.

In general, white flowers can be a symbol of purity and grace, and this includes hydrangeas. However, white hydrangea blooms are also associated with notions of pride, vanity, and boastfulness. White is also a traditional symbol of sympathy. Although white hydrangeas can be used to fill out a sympathy bouquet, they aren’t a typical choice for condolences.

Generally, green flowers symbolize renewal and rebirth. Green hydrangeas can also represent prosperity, good fortune, good health, good luck and youthfulness. Give these to anyone who needs a fresh start or an injection of positive energy in their life.

The History of Hydrangea Meaning and Symbolism Around the World

The History of Hydrangeas in Japan

Thought to be the native home of Asian hydrangeas, Japan shares a long history with the flower. According to legend, a Japanese emperor once gifted hydrangeas to the family of a girl whom he loved, but whom he had neglected due to urgent business affairs. He intended the floral gift to convey how much he cared for the girl and how sorry he felt for neglecting her.

In modern Japan, hydrangeas continue to convey the same symbolic meanings in addition to sentiments of unity and togetherness. Since hydrangeas are one of the country’s most popular flowers, visitors can admire them growing abundantly in hydrangea gardens throughout Japan.

In Buddhist traditions, the leaves of the Hydrangea Serrata are dried out and used to brew a ceremonial sweet tea called the tea of heaven. The tea is brewed for the Buddha Bathing Ceremony on April 8th, the day recognized as the Buddha’s birthday. Celebrants bathe statues of the Buddha in the tea and also serve it to drink.

The Symbolism of Hydrangeas in Victorian Culture

As a result of the hydrangea’s tendency to produce abundant flowers but few seeds, hydrangeas carried fairly pejorative symbolic meanings during the Victorian Era in Europe. These included arrogance, boastfulness, haughtiness, vanity, and pride.

During this period, rejected male suitors often gifted them, as an insult, to the women for whom they had previously held affection. Additionally, women who grew them in their gardens were thought to be unlikely to find romantic companionship.

The Popularity of Hydrangea Flower Tattoos and What They Symbolize

A popular choice for floral tattoos, hydrangea flowers in body art usually symbolize feelings of gratitude. Sometimes, the flowers can symbolize gratitude for a specific person, event, or something else.

In keeping with the flower’s symbolic meaning of deep understanding and heartfelt emotions, hydrangea tattoos are also sometimes chosen by a person who considers themselves to be an emotional person or someone who feels like they’re particularly in tune with the world and others around them.

When you owe someone a sincere apology, you can deliver it with an arrangement of blue hydrangeas to convey your understanding and regret. Since hydrangeas once helped an emperor earn forgiveness, they can likely do the same for you.

Purple hydrangeas convey deep understanding, making them a good choice for a friend who’s going through a difficult time. If you want to show your support while letting them know you understand what they’re going through, give them a gift of regally-hued hydrangeas.

As flowers of sincere emotions and deep understanding, hydrangeas are appropriate gifts to give to your closest friends. Green hydrangeas, in particular, can convey your appreciation of the deep connection you hold while wishing your friend good health and prosperity.

Although hydrangeas aren’t officially the flower of any anniversary year, pink hydrangeas are a nice and unique choice for a romantic partner. If you had hydrangeas at your wedding, they’re even better!

5. Any Event in Alabama

Alabama designated the hydrangea as the state’s official flower in 1999. If you’re attending any event, celebrating a special occasion, or offering condolences at a somber ceremony in Alabama, you’re welcome to give hydrangeas.

They’re beautiful on a living plant, but cut hydrangea blooms are notorious for wilting quickly. Follow these steps to prolong the beauty and freshness of your cut hydrangeas.

When cutting your own hydrangeas, carry a bucket of water and place each bloom directly into the water before bringing them inside.

Once you bring the stems indoors, boil a pot of water. Remove it from the heat, cut your hydrangea stems to length, and place them in the water for 30 seconds. Then, immediately arrange them in room temperature water.

Found in the baking or pickling section of the grocery store, alum has been shown to help preserve cut hydrangeas. When cutting your stems to length and arranging blooms, dip the end of each stem into about 1/2 inch of alum powder before placing them in the vase.

If your hydrangeas have already begun to wilt, you can try to revive them. First, change the flowers’ water. Recut the hydrangea stems and use the boiling water method from above. You should see a difference in a couple of hours if the blooms aren’t too old.

Loving Hydrangeas with the Rest of Us

Although some hydrangea meanings might not make you feel warm and fuzzy inside, many like gratitude, attrition, and deep understanding are highly commendable sentiments to find in a floral arrangement. Whether you choose to give your best friends blossoming hydrangea plants for their gardens or gift a bouquet to someone you’ve wronged in the past, your recipient will surely enjoy admiring the hydrangea’s brilliant blossoms.

Why is it called hydrangea?

What does a hydrangea represent?

What is the symbolic meaning of white hydrangeas?

In general, white flowers can be a symbol of purity and grace, and this includes hydrangeas. However, white hydrangea blooms are also associated with notions of pride, vanity, and boastfulness. White is also a traditional symbol of sympathy. Although white hydrangeas can be used to fill out a sympathy bouquet, they aren’t a typical choice for condolences.

What is the symbolic meaning of pink hydrangeas?

What is the symbolic meaning of blue hydrangeas?

Blue hydrangeas represent feelings of remorse and have long symbolized apology. They also signify feelings of understanding and deep gratitude. Give these to a person whom you’ve wronged or to someone whose importance in your life you might have overlooked in the past.

What is the symbolic meaning of purple hydrangeas?

Like blue hydrangeas, purple hydrangea flowers symbolize deep understanding. However, they carry this meaning without the notions of regret or apology. Instead, the added meaning of gratefulness makes purple hydrangeas a wonderful flower for a friendship or an enduring relationship. Additionally, purple is a traditionally regal hue. As a result, purple hydrangeas can also symbolize pride, royalty, and leadership.

What is the symbolic meaning of green hydrangeas?

Generally, green flowers symbolize renewal and rebirth. Green hydrangeas can also represent prosperity, good fortune, good health, and youthfulness. Give these to anyone who needs a fresh start or an injection of positive energy in their life. 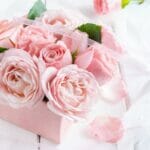 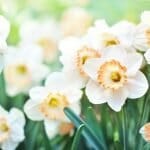