Growing a Boston fern is a little tricky, but with the proper care, you can keep this beneficial plant growing year after year. While this fern is slow growing and doesn’t need repotting very often, it will eventually outgrow the pot you first purchased. Upgrading to a larger container requires a simple repotting process. The entire Boston fern repotting process goes a little smoother with a few tips and tools to speed along the exchange of containers. This guide will take you through everything you need to know about when and how to repot a Boston Fern at home. 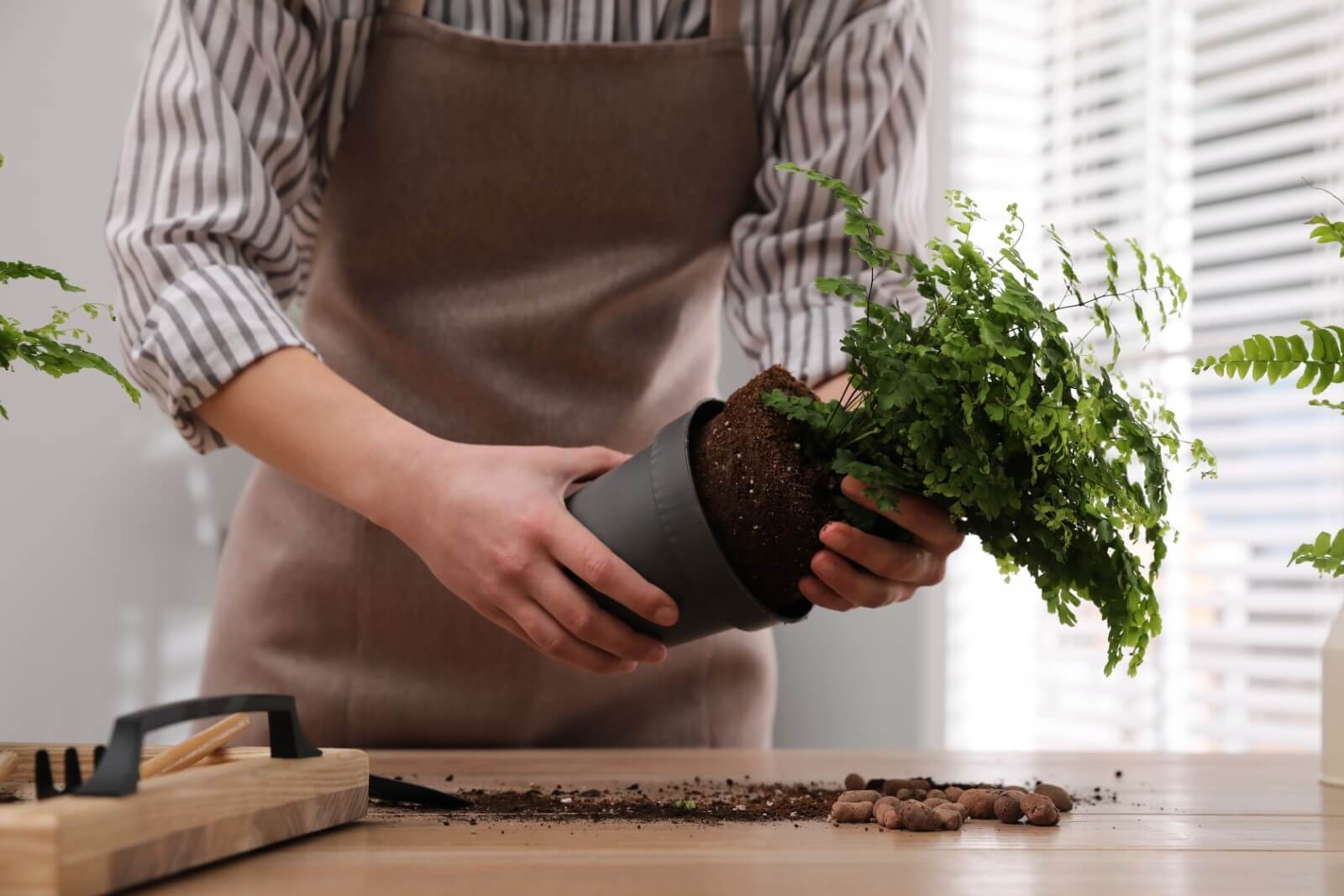 Repot your Boston fern only when it is rootbound, and stick to pots just a little bigger than the last container. Depending on the growth rate, you’ll typically need to consider repotting every 18 to 24 months. Transfer the plant with most old soil undisturbed, and fill the new container with fresh, well-draining soil mix. Repot only during spring and summer, unless you need to repot due to plant health issues.

In general, a Boston fern (Nephrolepis exaltata) only needs repotting when it outgrows its current container. Due to the slow rate of growth, that may take anywhere from 12 to 24 months or more.

Like many types of ferns, these plants prefer to be slightly rootbound, much like many other tropical plants grown indoors. Repotting the Boston fern too often will slow its growth rather than encourage it.

If your plant is struggling with a soil mix that drains too rapidly and doesn’t hold enough moisture, it may be worth taking off the container and at least switching to new soil. You can repot at that time if the plant needs the extra space.

There’s generally no issue or health problem with the fern that you could address by repotting, but it may perk up a fern that seems stalled or is not thriving any longer. This is especially true if you add a refreshed soil mix with a new influx of nutrients for the fern to absorb.

Thanks to the slow growth rate and preference for being slightly squeezed by its container, the Boston fern rarely needs repotting more than once a year. Some specimens may even go two to three years before really needing a larger container to stretch out in.

The root ball of this fern tends to stay compact even as the fronds get bigger, so you don’t necessarily need to rush to upgrade containers just because the fern is growing.

Instead, watch for signs that the roots are starting to show at the drainage holes in the container. This indicates root binding and is a good sign your Boston fern will actually benefit from repotting.

Of course, the fern should be repotted without waiting if the container is damaged or found to be a bad fit for the plant’s drainage needs at any time.

Best Times of Year to Consider Repotting a Boston Fern

Most plants are best repotted during their active growing season. This helps plants like the Boston fern recover from the shock without wilting or losing any foliage.

Avoid repotting the fern in the winter unless the previous container is damaged or has become too small for the root ball. Spring and fall are acceptable but not necessarily the best time of year.

If you only keep the Boston fern indoors year round and don’t bring it outdoors for the summer, you’ll likely see the same results from repotting at any time of year without much concern.

Boston ferns need a soil mix that isn’t too tightly compacted and drains pretty well. Yet, at the same time, it also needs to hold more water around the plant’s roots than many other houseplants prefer. It can’t handle the rapidly draining and aerated mixes used for most cacti and orchids.

Instead, look for a mix with a higher percentage of sphagnum peat moss, forest loam, and other absorbent materials that hold moisture. Commercial mixes for ferns are often the best choice if you can find them. These mixes will have plenty of vermiculite or perlite to add aeration and lightness to the mix without making it drain too quickly for the preferences of the fern.

You can mix your own potting mix for ferns by combining peat moss, humus, leaf mold, manure, compost, and at least 1/3rd by volume of a drainage-encouraging material like vermiculite.

What Tools Will I Need When Repotting a Boston Fern?

Boston ferns can become well-rooted inside their pots and may not want to slide out easily during this process. A sharp-edged hand trowel can make a big difference between struggling with the plant and getting it out cleanly and without a fuss.

Don’t be afraid to cut the fine hairs that may anchor a Boston fern in a plastic or terracotta pot since they will quickly recover in the new soil mix. Try to minimize damage to larger central roots unless you plan to divide the plant into multiple new ones in the process.

A spray bottle may help you mist the roots and fronds so the plant is less shocked during the transfer.

Aim to only increase the size of the pot by an inch or two each time you move up to a new vessel. Boston ferns grow well in hanging baskets, but they may get too heavy for basic plant hooks once they are near their mature size of three feet wide and tall. At that point, you may want to transition into a flat-bottom pot or vessel that better fits on a tabletop. Ensure the vessel drains well so water doesn’t stand too long around the roots.

How to Repot Your Boston Fern

Start by assessing if the Boston fern needs a repotting or not. If possible, lift the plant out of the pot to examine the roots. If that’s not possible, check the drainage holes for tangled or emerging growth signs.

Water the Boston fern well at least three days before you plan to repot it. Water it again, but more lightly, on the day of the repotting. This will ensure it’s flexible and easier to get out of the pot. Try squeezing the pot slightly if it is plastic, or use a sharp hand trowel to wedge between the roots and the container. Be patient and keep working around the plant, taking care not to damage the fronds as you turn it.

When the plant is loose, lift the fern out of its old pot. Set the root ball on the ground or work area as you fill the new container with a small amount of soil mix. Then set the plant down into the container, filling in around the sides and packing the material down with the trowel or a chopstick. Ensure there are no air voids around the plant by watering the well at the end. This also helps reduce the shock to the plant’s system by immediately wetting the exposed roots.

Keep the Boston fern away from drafts and direct sunlight during the process since it’s sensitive to exposure even when securely potted in its container.

The Boston fern may wilt slightly, but it shouldn’t show many signs of shock from repotting. Let the soil dry out slightly before watering again after repotting, so it doesn’t become waterlogged while recovering from the shock.

Avoid fertilizing your Boston Fern for a few months after giving it a new pot, especially if the soil mix has plenty of manure, compost, or fertilizer mixed in. Boston ferns don’t need a lot of fertilizer in the first place and are prone to stop growing and lose fronds if exposed to a high nutrient level.

For optimal care, position your Boston Fern in a warm and humid environment where it will receive plenty of bright, indirect sunlight throughout the day.

You’ll also want to watch out for common Boston fern pests and diseases, which often thrive when plants are grown in less-than-ideal conditions.

Should I soak my Boston Fern before repotting?

Soaking, or at least watering deeply twice before repotting, can help loosen the rootball and reduce shock. Boston ferns like having a lot of moisture around the roots, so soaking for a few hours right before repotting won’t hurt them.

Should you water a Boston Fern immediately after repotting?

Like most houseplants, Boston ferns need immediate watering after repotting. You may even want to pre-moisten the soil mix you use in the new container. This can help settle the soil and reduce air pockets.

Boston ferns don’t want a large pot around their roots. Keep the container only half an inch to an inch bigger than the root ball in all directions.

Why is my Boston Fern limp after repotting?

A Boston fern may wilt, or the fronds may yellow slightly from shock after repotting, especially if it was struggling or the process was rough on it. Give the plant time, and it should recover.

Should I mist my Boston Fern after repotting?

Misting can help a Boston fern after repotting by providing extra humidity.

Should I fertilize my Boston Fern after repotting?

Don’t fertilize for at least six months after repotting.

Don’t let your Boston fern languish in a tiny pot as it gets bigger. You can easily repot a Boston Fern in about half an hour or less. For the best results, aim to repot in the spring and summer months during the active growing season. 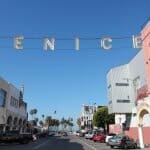 Why is My Aloe Plant Curling (and How to Fix It)?