When, Why, and How to Prune Boston Ferns

Everything You Need to Know About Pruning Boston Ferns at Home

Pruning is a process that’s often associated with trees and shrubs. Yet many of the plants grown indoors can also benefit from this practice, at least in small amounts. Boston Ferns (Nephrolepis exaltata) don’t have a high need for pruning like Orchids or Bonsai trees might. Just a little trim here and there can keep your indoor ferns looking their best. This guide will run through everything you need to know about when and how to prune Boston ferns at home and when they’re best left to grow without having fronds removed.

Boston Ferns primarily require pruning to remove dead, diseased, or wilting foliage. You can trim the individual fronds to shape the plant and control size, but no more than 1/3rd of the foliage should be removed at once using sharp, clean cutting tools.

Pruning and How It Improves Plant Health and Growth

When a plant grows in its natural environment, various forces will cause some amount of the foliage to fall or break off. Everything from animals and insects eating the leaves to the wind blowing entire branches off will keep a plant trimmed and consistently generating new growth.

Since most types of ferns evolve with this kind of regular loss of old or damaged foliage, it’s often needed for cultivated varieties since they’re more protected from this kind of natural loss. It’s especially absent in houseplants that are kept indoors or in sheltered outdoor environments.

Pruning is a controlled form of foliage loss, so it’s easily targeted to remove damaged or diseased material. This reduces the spread of disease and can keep common Boston fern pests from stressing the plant too much. It’s also used to keep dead foliage from ruining the look of a decorative plant.

A form of pruning known as deadheading involves cutting off spent flowers before they turn to seed pods, which distracts the plant from putting out more blossoms.

In the case of the Boston Fern, pruning is primarily a method of keeping its size under control, guiding its shape, and removing damaged or dead fronds.

Boston Ferns grow more quickly outdoors, even if just kept on a porch for the summer than they will indoors. Yet, with a diluted half-strength dose of fertilizer once a month or so during the growing season, it’s possible to achieve a reasonable growth rate even inside the home.

They’re slow-growing plants no matter what, achieving a maximum of 8 to 10 inches of growth at most per year. Inside, that’s often closer to 4 to 6 inches of growth. This includes both vertical and horizontal growth in both directions. Boston Ferns tend to grow in a circular shape when healthy because the fronds gain a curved set as they mature.

What’s the Best Time of Year to Prune Boston Ferns?

It’s best to avoid pruning the Boston Fern in the winter. The fern will be primarily dormant then, making it harder for the plant to heal after any trims. Removing entirely dead and dried-out fronds is always fine because they don’t need to recover if trimmed off cleanly with no cuts to living tissue.

For pruning intended to shape the Boston Fern, stick to doing the majority of trimming it in the late spring and early summer when possible. This helps the plant recover as quickly as possible without risking disease.

Fall trimming is acceptable to give a plant a neater look after a summer of growth or to help it fit indoors in a smaller space.

If your Boston fern experiences issues with browning tips or yellowing fronds due to sun damage or cold exposure, trim it during the next growing period to clean it up.

What Are the Essential Tools for Pruning Boston Ferns?

Boston Ferns have soft foliage and somewhat wiry but thin spines down the center of the fronds.

Sharp scissors are generally enough to trim off any part of the fern you need to remove. Try a pair with pointed, longer tips to get to the base of each frond and make precise cuts. A set of hemostats can help hold the frond closer to the base as well as you trim.

These ferns aren’t considered irritating to touch and don’t produce any sap, so there’s no need to wear gloves when pruning them.

Sterilize the scissors before and after using with a solution of bleach mixed with water, 1 part bleach to 10 parts water.

How, When, and Where Should You Prune Boston Ferns?

Most Boston Ferns will grow well, even with minimal pruning. Limiting your trimming only to removing dead or damaged fronds is fine. This is especially true in the fall or winter when the fern is dormant. Boston Ferns kept entirely inside throughout the year will rarely need much pruning. It’s a technique more commonly used on those plants brought outside for the summer, which can leave some leaves damaged and others growing far out of the general round shape of the fern.

Select fronds that have seen better days to prune out first. Aside from dead or dried-up foliage, you may want to remove fronds that are bent, stick straight up or down, or that otherwise distract from the general shape of the fern.

Most people also prune to keep their ferns under a specific size. Trim just 1/3rd of the fronds off at a time for this kind of size control, and don’t trim more than 1/3rd of all the fronds at once.

Give the plant a few weeks between these attempts at pruning to control size. Since the Boston Fern is relatively slow-growing, you shouldn’t need to give it a trim more than once or twice a year.

How Do You Shape Boston Ferns?

Most people prefer a gently rounded look for their Boston Ferns. To encourage the look of a denser plant, you can trim back the tips so the fronds stack closer together. As you prune, try ruffling the leaves from bottom to top. This shuffles the foliage around so you can see which parts still need trimming for a cohesive shape.

Caring for Your Post-Pruned Boston Ferns

Boston ferns can be returned to their original location after pruning, they thrive best in warm locations in rooms with bright, indirect sunlight.

Avoid overwatering the Boston Fern after pruning. Misting and humidity supplements are fine, but the plant won’t need a lot of water for the first few days to a week after pruning. If you only removed dead foliage that was fully dried out, no special care is needed.

Don’t try to combine trimming and repotting into the same day for the Boston Fern, or you may shock the plant too much. Give it a few weeks between these two stressful events to ensure the plant has time to recover.

How often should I prune my Boston Fern?

Boston Fern plants are slow growing, so they rarely need more than one pruning per year. You might want to trim off dead fronds as they dry up.

Can I cut off the excess leaves of a Boston Fern?

Leaves that poke out, hang down, or lose their color can all be removed from a Boston Fern. Don’t cut too much foliage off at once.

Should I cut the brown leaves off my Boston Fern?

Brown and dried-up fronds can permanently be removed from a Boston Fern, regardless of season or how recently you’ve fertilized. They trap moisture and encourage disease, which can threaten healthy fronds.

How do you make Boston Fern fronds bigger?

Fertilize the Boston Fern regularly throughout the growing season. Use a half-strength dose to prevent damage, but stick to a monthly dose as long as the plant is actively growing. Placing it outside in the partial shade during the summer also speeds growth.

Pruning doesn’t usually encourage new growth in a Boston Fern, but it does help remove old fronds that could prevent new growth from pushing out and filling in the plant. It also gives you control over the size and shape of the plant.

If you’re bothered by a particular frond at any point, it’s OK to give your Boston Fern a quick snip. Try to limit heavier trimming and shaping to the summer months so the plants can recover faster. With a trim now and then, your Boston Fern will look neater and stay healthier. 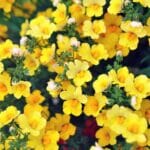 Nemesia Flower Meaning in the Language of Flowers