While there are many members of the Ficus genus that are grown as houseplants, the Ficus Ginseng is one of the smaller and more eye-catching varieties. This Ficus has a large, bulbous root that is exposed at the base of its trunks for a dynamic look that lends well to Bonsai, and is also rich in symbolic meaning. Even if you’re not a Bonsai fan, you may decide to keep a Ficus Ginseng for its ease of care and glossy green leaves. Make sure your Ficus ginseng is getting enough fertilizer with these guidelines.

Ficus Ginseng needs fertilizer about once a month during the spring, summer, and fall. Over the winter the plant goes partially dormant, so stop fertilizing then to avoid build-up issues. Try giving the plant more fertilizer if it has slow or light-colored growth.

Fertilizing is often referred to as “feeding” a plant, but this isn’t technically true. The plant’s food comes from photosynthesis, a process through which the leaves produce sugar in response to sunlight exposure (see our in-depth guide on where to position ficus ginseng plants for optimal care).

Instead, the fertilizer is like a multivitamin for the plant. It helps supply all of the trace minerals and elements that the plant needs to grow that it can’t produce on its own. This includes nitrogen, potassium, and phosphorous, or the “big 3” nutrients most fertilizers contain. Other important additions can include copper, selenium, calcium, and iron.

Fertilizer tends to come in a form that makes it easy to apply, such as a powder that is mixed with liquid or small pellets that are mixed into the soil.

Synthetic fertilizers are made from chemical compounds or minerals mined directly from the ground.

More natural options include fish meal, blood and bone meal, the manure from various animals, and by-products of grain production like soybean meal.

No matter the format or source, it’s essential to match the content of the fertilizer to the plant’s needs. A fertilizer with too much nitrogen or calcium could cause problems for a plant rather than help its growth.

When healthy, the Ficus Ginseng has dark green leaves with a shiny gloss to them. This helps prevent the loss of water through the leaves.

If the plant isn’t getting enough nutrients from the soil, the leaves will slowly become a pale color and eventually yellow (and may even drop leaves). This is a much more gradual process than the color loss and yellowing caused by a lack of light or watering issues.

Another sign of a lack of nutrients is slow growth. Again, this can be caused by a lack of light. If you adjust the light levels but still don’t see new growth appearing on the branches of your Ficus Ginseng, try fertilizing next.

As long as the plant isn’t partially dormant due to winter, it should respond within a few weeks. Curling on new leaves can be an indication of a lack of fertilizer, but it’s far more common when too much fertilizer is applied too quickly.

It’s also important to stay on top of any common Ficus ginseng pests, bugs, and diseases, and you’ll want to repot your ficus ginseng periodically in a fresh potting mix.

When and How Often Should You Fertilize a Ficus Ginseng?

Ficus Ginseng only needs fertilizer during its active growing season. This stretches from the spring through the fall, even if outdoor temperatures aren’t suitable for growth of other plants. The length of the day tends to trigger active growing in this species, much like different types of Ficus.

The plant can’t absorb much fertilizer in the winter when it’s partially dormant, so it tends to build up in the soil and cause issues.

When the Ficus is actively growing, fertilize it at least once a month. A Bonsai fertilizer product is a good choice because it’s designed for the right balance of nutrients, so there’s an issue of build-up in the soil.

If the plant is showing signs of being over-fertilized, such as developed brown spotted or curling leaves, give it a few months before applying any more.

The Best Fertilizer for Ficus Ginseng

Bonsai fertilizers are a good choice for the Ficus Ginseng, even if you’re not actually trying to prune and shape your plant according to those principles. It’s simply designed for trees that are being kept small, providing enough nitrogen for leaf growth without triggering unwanted trunk or branch growth.

Another good option is a succulent or orchid formula that’s been watered down to half-strength. No matter the product, look for nutrient values around 3:1:2. That’s 3 parts nitrogen, 1 part phosphorous, and 2 parts potassium.

If you purchase a fertilizer that has the same ratios but higher numbers, such as 12:4:8, you simply need to dilute the product until it’s around 3:1:2. For example, you’d want to use ¼ of the usual dose of the 12:4:8 product.

To choose the right fertilizer, consider that Ficus Ginseng needs mainly nitrogen, followed by potassium and a little phosphorous. Too much phosphorous will stop leaf growth and make it hard for the plant to keep its roots healthy.

On the flip side, providing too much nitrogen leads to an explosion of leaves and stems that creates quite a messy look. Liquid fertilizers are preferred for this plant due to the need for rapid release and absorption. Slow-release products are too slow for Ficus Ginseng and will lead to a build-up in the soil due to regular application.

Fish emulsion is a great choice, but it’s a little stinky to try and make yourself. Manure products are a good choice, but again, they’re hard to apply as liquids.

In most cases, you’ll find it easier to use a pre-made liquid fertilizer for this plant than to apply your homemade mixtures.

How to Apply Fertilizer

Make sure that you don’t splash the liquid fertilizer on the plant’s leaves, trunk, or root. While the sizeable visible root may seem like a good place to apply the fertilizer for rapid absorption, that part of the plant can’t actually take in moisture or fertilizer.

Instead, ensure the soil around the plant is evenly coated with the application. Applying fertilizer to just one side of the plant could lead to uneven growth as it seeks the nutrients it needs.

Water after applying to ensure the fertilizer is rinsed down to the smallest roots that absorb the nutrients.

Overfertilization isn’t too common with Ficus Ginseng because the plant can use the nutrients fairly well. If you apply fertilizer too often, you’ll see stretched-out and curled growth rather than healthy new leaves.

You may also notice the plant getting taller than expected, but not in a healthy way. If you use the wrong fertilizer or apply too much at once, you could see yellowing or browning of the leaves.

Make sure you’re erring on the side of too little fertilizer rather than too much because it’s almost impossible to correct after the fact. You simply have to wait out the new growth and see if the plant recovers.

Water with a much bigger volume of liquid than usual if you suspect overapplication of fertilizer to help rinse out as many nutrients as possible before the roots get a chance to absorb them.

This plant is considered a heavy feeder for a houseplant, so it needs a regular dose of fertilizer to look its best.

When should I fertilize my Ficus ginseng?

What is the best fertilizer for Ficus ginseng?

Ficus Ginseng needs a liquid product with a ratio of around 3:1:2 of nitrogen, phosphorous, and potassium. Products that are stronger but have the same ratio can be diluted.

Miracle-Gro has a ratio of 24:8:16, which makes it far too strong for the Ficus Ginseng if applied according to the instructions. If you use 1/6th of the recommended amount, you will have an appropriate fertilizer.

Used coffee grounds can supply nitrogen for the Ficus Ginseng, but only very slowly. They can be added sparingly but won’t replace the need for regular fertilization.

Don’t be afraid to fertilize a healthy Ficus Ginseng as long as you have an adequately diluted fertilizer. Watch out for products like Miracle-Gro that are too strong when mixed as directed but just fine when diluted. For more, see our in-depth guide to Ficus ginseng care at home. 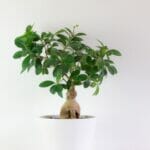 How to Water Ficus Ginseng at Home 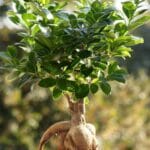 How Much Sunlight do Ficus Ginseng Need?