17 Best Types of Ficus Tree to Grow at Home

Native to tropical regions all around the world, the Ficus plant genus contains about 850 species of trees, vines, shrubs, epiphytes, and hemiepiphytes that belong to the Moraceae plant family. Collectively, this group of plants is known commonly as figs, fig trees, or ficuses, although specific species have their own common names as well.

Uses and Benefits of Ficus Trees

When kept as houseplants, ficus trees are primarily considered to be ornamental plants. However, these tropical plants don’t just sit around and look pretty; they have many additional benefits to offer.

For example, the species, Ficus carica (common fig), is widely cultivated for its sweet fruit.

NASA’s clean air study looked at the air-purification properties of both Ficus elastica and Ficus benjamina. The study found that they are both excellent air-purifying plants. Both species remove toxins (such as formaldehyde, xylene, and toluene) from the air while also helping to replenish oxygen.

Ficus trees are also considered to be lucky or auspicious plants in feng shui practices. In feng shui, ficus trees are said to draw positive energy, help neutralize negative energy, and can also draw abundance and wealth. Ficus plants possess these positive attributes due to the fact that they are fruit-bearing and have leaves that are typically round or ovate, glossy, soft, and pliable, so they can flutter in the wind.

For more, see our in-depth guide on where to position Ficus Audrey plants in the home for optimal care and Feng Shui benefits.

Ficus trees have had many other uses and benefits worldwide and throughout history. The latex sap of some ficus trees has been used to produce rubber. They have also been used in herbalism and to make papers, textiles, elements of architecture, and were even used to construct caskets for mummies in ancient Egypt.

Ficus and fig trees have a place or are mentioned in several religions around the world. They appear in Buddhism as the Buddha is said to have achieved enlightenment while meditating under a fig tree. Fig trees also appear in the Torah and both the Old and New Testaments of the Bible. It’s also a significant tree in Islam, Hinduism, and Jainism.

The fiddle leaf fig might be the most popular type of ficus to grow indoors. These trees have lovely, slender, brown trunks and broad, glossy leaves that are shaped similarly to fiddles, growing broader at their bases and tips. Native to western Africa, fiddle leaf fig trees can grow to be about 50-feet tall in their natural habitat. Indoors, they can grow to be about 10-feet tall.

The creeping fig or climbing fig plant is a popular variety of ficus that grows natively in eastern Asia. As its common name suggests, this ficus is a vine with a creeping or climbing habit. As a result, you’ll need to support it so it can climb. While a creeping fig can cling to the walls of your home on its own, pulling it away can actually damage the paint on your walls.

This ficus species can grow as small trees, shrubs, or hemiepiphytic lianas that cling to the sides of other trees in the tropical forests of Africa. Grown indoors, the African fig tree typically grows into a small tree with ovate leaves papering the plant’s slender trunk with large, lush foliage.

This species of ficus is native to southeast Asia. It features bright-green, rounded leaves and grows as a tree or hemiepiphytic shrub in its native climate. The mistletoe fig gets its name from the reddish-white berries the plant produces when it has ample sunshine. These berries result in the plant resembling the famous plant used for kissing at Christmastime.

Native to western Asia, the Middle East, and the Mediterranean, the common fig is the species of fig you are likely most familiar with because this species of ficus tree produces the fruits we all know as “figs.” At some point, you have probably enjoyed these sweet fruits, which are often available dried, used in jams, or found in fig-based desserts.

The red leaf fig is native to northeastern Australia, Indonesia, the Philippines, and Papuasia where it grows in rainforests, often along streams and creek beds. Mature leaves are vibrant green in color and long (about 5 to 10 inches), and they sprout from branches in alternate patterns that look like rosettes when viewed from above. New foliage growth has a reddish-orange, coppery coloring, and that’s where the Ficus congesta gets its common name.

Native to the rainforests of South America and India, the burgundy rubber tree is a cultivar of the Ficus elastica. It features large, glossy, deep-green, ovate leaves that are each striped with a unique center vein in a strikingly bright red or burgundy color. This plant is relatively easy to grow, but it does not adapt well to change. So, be sure before you choose a location in your home.

This cultivar of the Ficus elastica features a more compact silhouette and wider leaves, making it a great choice of houseplant thanks to its high-impact foliage and low-profile size. It’s also one of the easiest ficus trees to grow indoors in an artificial environment because it can tolerate the lower light conditions that are often common indoors while also handling the lower humidity that’s usually present inside.

Although there are several cultivars of the Ficus elastica, this species, native to southeastern Asia, is the original rubber tree, and it’s one of the most popular houseplants. The rubber tree grows a slender, brown trunk from which large, broad, ovate leaves in a glossy green sprout in an alternating pattern around the stalk. In the wild, this ficus tree can reach almost 100 feet. Grown indoors, however, it’s much more manageable.

When you think of a basic ficus, the Ficus benjamina (commonly called weeping fig, Benjamin fig, or ficus tree) is most likely the plant you are picturing. These ficus trees are commonly trained to grow with braided stems or trunks and a prominent pom-pom-shaped burst of fluttery foliage at the top. The weeping fig is the official plant of Bangkok and a favorite in office spaces worldwide.

The Ficus benghalensis (aka Ficus Audrey) is native to India hence its common native the Indian banyan. Going by measurements of canopy coverage, several Indian banyans growing in Idia are classified as some of the largest trees in the world. Grown indoors, you can rest easy, knowing your banyan houseplant won’t achieve the same impressive size.

The Ficus microcarpa has common names including Chinese banyan, Malayan Banyan, Indian laurel, and curtain fig. Its native habitat spans the tropical regions of southeastern Asia and Australia. This tree species produce whitish-red berries and is often cultivated in miniature form as a bonsai tree.

The Moreton Bay fig, large-leafed ficus, or Australian banyan grows as a large (almost 200 feet tall), evergreen tree in its native range in Australia. These ficus trees have large, showy root systems that protrude and survive above the ground, giving these trees a theatrical appearance in nature and when cultivated indoors.

Native to the Malay archipelago, this ficus tree can grow to be just over 30 feet tall when growing in its natural habitat. However, the Ficus retusa is commonly called the retusa bonsai because it is most often cultivated indoors as a miniature bonsai tree.

Native to India, China, and southeastern Asia, the Alii fig or banana-leaf fig produces two kinds of leaves – both long and narrow. Those growing near the top on higher branches are broader than the narrower leaves growing toward the plant’s base from branches closer to the ground.

Commonly called the council tree or lofty fig, the ficus altissima is native to southeastern Asia and can reach heights of up to about 100 feet when growing in its natural habitat. It is an epiphytic ficus that grows by “strangling” or climbing up neighboring trees.

Grow the Right Ficus Tree for Your Home

No matter which ficus tree is your favorite, it is important to select a species that will grow well in your home’s environment. When selecting a type of ficus tree and location for it in your home, be sure to carefully consider the light conditions, temperature, and humidity in the plant’s specific spot. Taking care to provide your new ficus with the right environmental conditions will help ensure you enjoy a long, happy life with your houseplant. 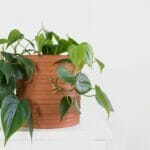 When and How To Water Heartleaf Philodendron Plants 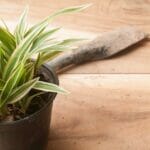 How to Propagate Spider Plants at Home (The Easy Way)