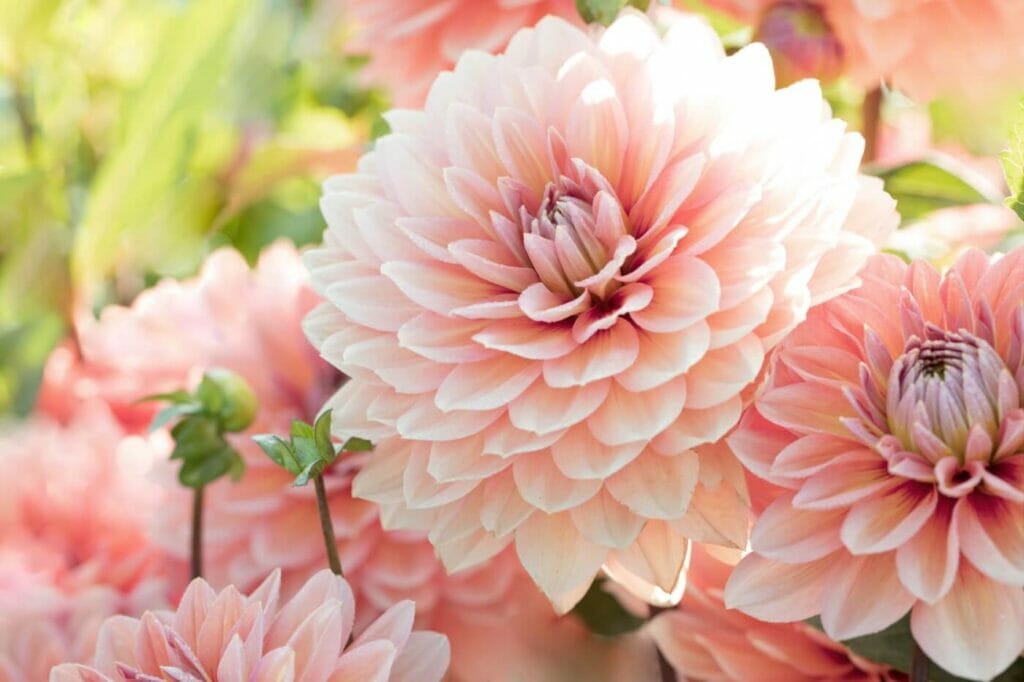 How Long do Dahlias Take to Flower? (Essential Guide)

A member of the Asteraceae family, Dahlias are colorful flowers closely related to sunflowers and daisies. These flowers are some of the boldest bedding plants that are still easy to grow, especially from tubers, and are loved for their beneficial properties, and symbolic value. Flowers range in size from tiny blooms under 2 inches in diameter to so-called “dinner plates” that can be up to 14 inches across. This guide will take you through everything you need to know about how long Dahlias take to flower each year.

Dahlias are generally grown from their tuberous roots rather than from seeds. While they’re often sold with bulbs and other flowers planted from root cuttings, they have tubers like potatoes or ginger rather than round bulbs. This means they’re even more sensitive to being planted at the right time of year due to the chance of freezing damage.

The same rules apply to Dahlias starting from seed. Dahlias grow too slowly for direct seeding, so start any seeds 8 to 12 weeks before the last frost date to give them time to grow. Plant them only during the correct time or risk getting no growth.

When to Plant Dahlias:

Only plant dahlias after any chance of a late frost are passed and soil temperatures have warmed up to 60 degrees F. A late frost can kill off the tubers for the year, wasting your time and money.

It’s better to plant a few weeks later than necessary than to try to plant too early. In warm climates in USDA zone 8 and above, Dahlias can be planted in the fall. If your last frost date is after May 1st, consider starting the roots in pots a month before planting to give them a head start.

Locate dahlia plants in areas where they will receive full sun and plenty of moisture. They prefer some shelter from wind and direct sun in the afternoon, so a protected area is recommended.

South and Eastern exposures give them plenty of light while avoiding the worst of afternoon sun that can bake their soil and dry out the roots. Planting them against a wall is a good way to increase warmth and reflected light.

If the plants were started from seed, simply transplant the seedlings like any other flower or vegetable. For tubers, remove the roots from any packing material and rinse them off. Soak them for one hour in warm water to rehydrate them.

Dig a hole that is only one to two inches deeper than the height of the root mass and its stem. Settle them into the hole and press the soil in firmly, covering the stem just slightly. Water dahlias thoroughly after planting, then water every other week until leaves emerge.

Other Factors to Consider:

Dahlia tubers tend to be dormant from cold temperatures, even after going into the ground. Bringing the tubers indoors and keeping them near a mild heat source for two weeks before planting can help them break out of dormancy faster, leading to quicker growth and blooms.

However, you need to observe the tubers and be prepared to plant them in pots if they show signs of sprouting. A sprouted Dahlia tuber quickly loses its stored energy unless it’s in the ground.

Once you put the tubers in the ground, you must exercise your patience. It can take up to one full month for any signs of growth to appear.

Digging up or even uncovering the tuber to check if it’s still growing will only damage the tips and ruin the chances of a healthy Dahlia plant. If you don’t see any signs of growth after two months, the root likely failed to sprout or fell prey to a pest. Dahlias can sprout in as little as one to two weeks when soil temperatures are warm, and the roots are handled correctly over the winter.

After the first few leaf tips emerge, growth accelerates rather quickly with the Dahlia. They can often reach their maximum height within two months of the first leaf sprouting. However, it will take a little longer for buds and blooms to appear. Don’t worry if the Dahlia is still reaching its maximum height by the time the first bloom opens. This can vary depending on the cultivar and the growing conditions.

Good fertilization will lead to a bush that reaches full size before it blooms, while a lack of light, water, or fertilizer may slow down the growth. Dahlias don’t bloom in spring or even mid-summer in most parts of the country, but they should begin blooming by late summer if they’re growing healthily.

Dahlias need plenty of light to keep them happy and help them grow large blooms. Water the plant at least once a week and provide at least an inch of water.

If the climate is extra hot or arid, consider splitting the watering into two weekly applications of ½ inch each time. Stake extra tall and extra-large Dahlia blooms so the stems don’t bend over under the weight.

Use a general-purpose flower fertilizer once a month at full strength to keep the plants growing steadily throughout the season. Avoid high nitrogen fertilizer from mid-summer onward to prevent delays in flowering.

Poor draining soil is the number one problem for Dahlia growth. Dahlias in heavy clay will grow slowly and fail to flower. Loose sand isn’t great either because it drains too quickly and dries out. Try mixing in plenty of organic material. See our in-depth guide to the best soil mix for dahlias here.

Compost, peat moss, and aged manure help add nutrients while loosening the soil. General-purpose dahlia fertilizer can be mixed into the soil before planting, but it’s no replacement for ongoing feeding during the growing season.

Uneven watering leads to slow growth and interrupted flowering. Keep water levels steady by watching the weather and watering any time the Dahlia doesn’t get at least 1 inch of water in the week. Don’t let the soil dry out more than the first inch.

Dahlias can attract thrips, aphids, mites, and mealybugs. They’re also prone to fungal diseases and rots. Keep moisture levels from getting too high and treat any pests with organic pesticides.

Dahlias are sensitive to low nighttime temperatures. If you’re worried about a summertime dip before flowering begins, consider keeping the plants in pots so they can come in on a chilly night.

Dahlias typically take around two months to bloom after the first sprouts appear, but growing Dahlias is primarily a game of patience. As long as you can commit to some weekly watering and monthly fertilizing, you should be rewarded with beautiful and colorful blooms by the beginning of fall. 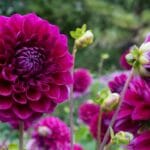 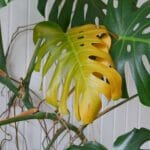