Dianthus, a member of the carnation family, has long been associated with the gods and divinity. Known as the “divine flower,” carnations, Sweet Williams and China pinks have been cultivated across Asia, Europe, and North America for hundreds of years, from ancient Greece and Rome to Thomas Jefferson’s gardens at Monticello. To the Victorians, Dianthus stood for love, affection, admiration, and gratitude. Commonly used in wedding floral design, these lovely blooms are the perfect way to express how much you care. Here we’ll take you through everything you need to know about dianthus flower meaning, plus learn about their history and origins, uses and benefits, and cultural significance around the world. 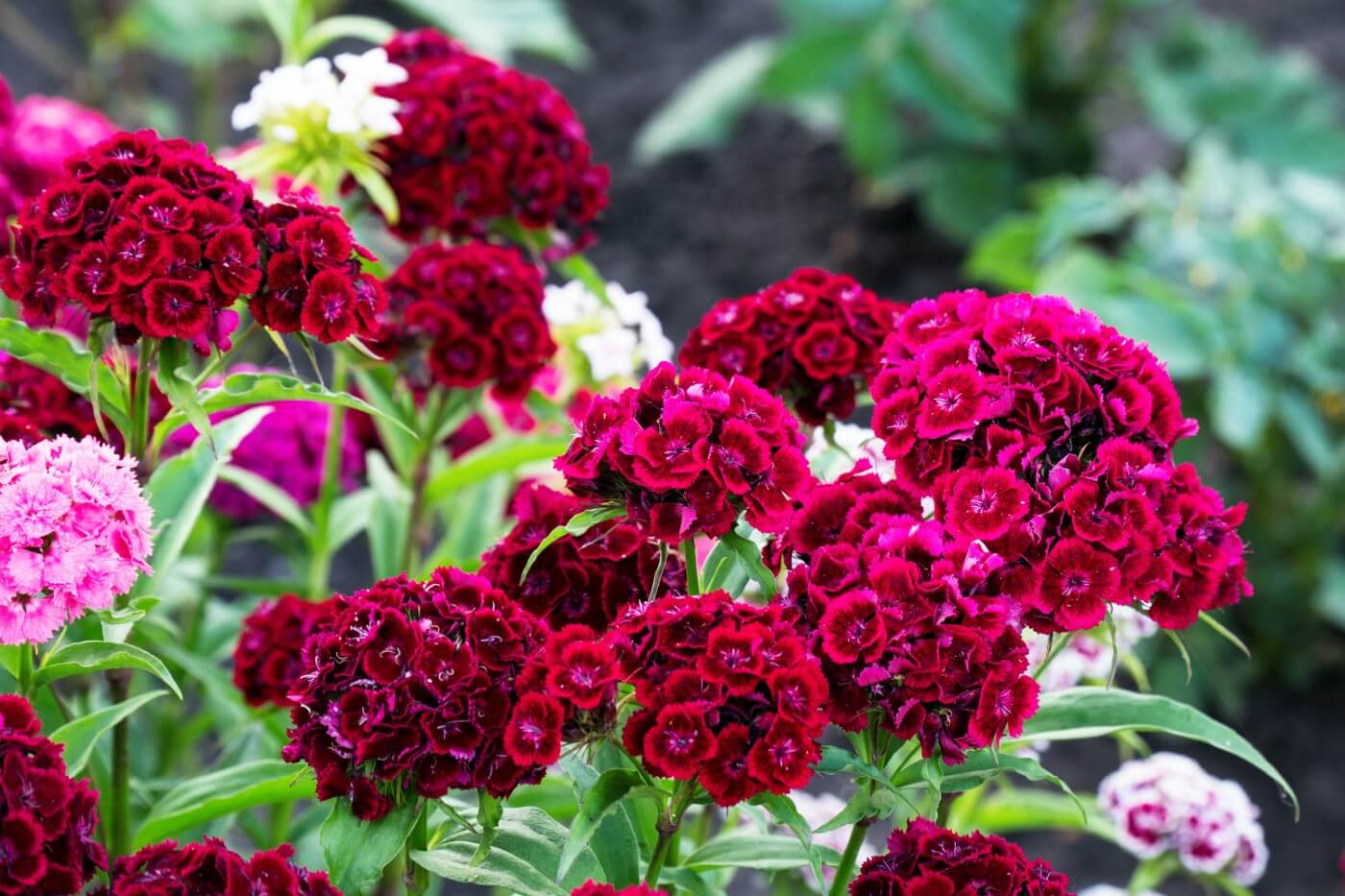 Known as the “divine flower,” dianthus has long been associated with the gods and love and has been used as wedding flowers for millennia. During the Victorian era, the pink, red and white blossoms symbolized love, affection, gratitude, and admiration. In the language of flowers, a gift of Dianthus can be used to express how much you care for someone.

Dianthus flowers bloom in shades of pink, red, white, and purple. Some boast bi-color blooms. Flowers have five petals with jagged, serrated, or fringed edges that look as though they were cut with pinking shears.

Foliage is linear or lance-shaped. Most have a gray-green tinge. Commonly cultivated varieties, such as Sweet William, China pinks, and carnations, generally grow between 1 and 3 feet tall. The plant has a clumping or mounded form.

Dianthus flowers are known for their slightly spicy scent. Some liken their fragrance to cloves.

Most Dianthus flowers cultivated in the landscape today are annuals or biennials, depending on climate zone. In warmer regions, Dianthus may grow as a tender perennial.

Dianthus has long been cultivated in regions of their native Asia and Europe. Some varieties have medicinal uses and play a role in Chinese traditional medicine.

Historical references to Dianthus stem back to the Greek botanist Theophrastus, also known as the father of botany. Theophrastus studied and illustrated plants in the 3rd century B.C. and gave Dianthus its genus name.

The Romans spread Dianthus around Europe. The plants had been introduced to England gardeners on a large scale by the 15th century. Records show that pinks were popular in Tudor and Edwardian eras when they were called names like pheasant-in-wine and gillyflower.

They soon traveled to North America, arriving with colonists in the 1670s. Records from Thomas Jefferson’s Monticello show that D. chinensis were cultivated there in the 1700s.

Until the 1960s, annual Dianthus plants set seed and had a shorter growing season. That all changed when a hybrid between two non-seed-setting species was developed. The new plants offered a much longer blooming season and paved the way for the many Dianthus annuals for sale at garden centers across North America.

Over the years, horticulturalists have developed thousands of cultivars and hybrids, as well. Some of the most popular include:

Dianthus comes from the Greek word for god, dios or “of Zeus.” Anthos is Greek for “flower.” The Greek botanist Theophrastus named the flowers in the 3rd century B.C.

The common name “pinks” comes from the petals’ filled edges, which look like they’ve been cut with pinking shears. Interestingly, some believe that the word “pink” itself comes from the color of the flowers, rather than the other way around.

What regions are Dianthus flowers native to?

Dianthus are native to the temperate regions of Europe and Asia. One species, D. repens, is native to North America and a few to Africa, including D. basuticus and D. zeyheri.

When are Dianthus flowers in bloom?

Commonly grown ornamental varieties of Dianthus start blooming in late spring and may continue through the summer, depending on growing conditions.

Dianthus flowers have multiple medicinal and culinary uses. European herbalists have used the carnation (D. caryophyllus) to treat fevers, as a stimulant, and to treat nervous and coronary disorders.

In their native China, Chinese pinks (D. chinensis) have been utilized in traditional medicine for thousands of years. The plants are known as “bitter tonic herbs” and are used to promote healthy digestion by stimulating the digestive system, urinary tract, and bowels.

Dried foliage of Chinese pinks are used to treat eye ailments, and as well as ease skin swelling and irritation. Research suggests that the plants may be a potential cancer treatment.

The carnation’s petals have culinary uses, as well. They may be eaten as a garnish, in salads, candied, or in a syrup. The ancient Romans used the clove-scented petals to flavor wine and oils.

Not all Dianthus are edible, though. D. chinensis is mildly toxic to humans, dogs, and cats. If eaten, it may cause vomiting. Contact with the plant’s foliage may also cause skin irritation.

The flowers do attract pollinators. Bees, butterflies, and birds, including hummingbirds, are all drawn to the colorful blossoms.

A Popular Stem in Floral Arrangements

When given as gifts, Dianthus symbolizes love and affection. They are a great way to let someone know you admire and care about them. Carnations are the flower of the first wedding anniversary, as well as the flower for Mother’s Day. Birthdays, congratulations, romantic dates, and weddings are all appropriate occasions to gift Dianthus.

The Meaning, Symbolism, and Cultural Significance of Dianthus Flowers

Dianthus flowers have long valued meanings and symbolism across legends and folklore in many cultures. To the ancient Greeks, the dianthus flower was linked to the gods and divinity. The name dianthus stems from “of Zeus.” In ancient Rome, the flowers were tied to the god Jupiter. They were often included in wreaths, garlands, crowns, and other flowers used for religious or ceremonial purposes.

In Korea, Dianthus are used to divine the future. Three flowers are placed on a young girl’s head. Whichever flower dies first offers a clue to the girl’s future path.

In Japan, flowers are valued for their spicy fragrance. There, the blooms are called hana-fuki which means to blow away flowers. It’s thought that picking dianthus, smelling its scent, and letting it be blown away will also carry off troubles.

To Christians, the carnation represents the suffering of Jesus and Mary. After the crucifixion, Mary shed tears. Carnations grew on the spots where her tears landed.

This legend may also underlie the use of carnations as the official flower of Mother’s Day, a tradition in the U.S. since the early 20th century. Today, carnations — especially white blooms — are a sign of a mother’s love.

In the Victorian era, dianthus stood for love, admiration, affection, and gratitude. A gift of dianthus was a way to show that you cared for — or loved — someone.

The flowers show up in art. Some believe that D. barbatus, or sweet William, was named for William Shakespeare. In the Renaissance, dianthus was often used to represent love and a red carnation is often featured in paintings of the Madonna and child.

Pinks were also associated with love, as in this portrait by Rembrandt and a panel from the 1400s. More recent works featuring carnations are displayed at MOMA.

Dianthus brings beautiful, long-lasting blossoms to the garden in shades of pink, red, white, and purple. When used in bouquets and arrangements, dianthus adds a pleasant, spicy fragrance to floral gifts. Long associated with love, affection, and divinity, these flowers are a perfect way to let someone know how much you care on an anniversary, Mother’s Day, or just because.

Is Dianthus in the carnation family?

The Dianthus genus is a member of the Caryophyllaceae family, which is commonly known as the carnation family. Carnations, sweet Williams, and pinks are all types of Dianthus.

What does Dianthus symbolize?

Dianthus flowers have long been associated with the divine, from the ancient Greeks to early Christians who connected red carnations to the Virgin Mary. To the Victorians, dianthus signified love, admiration, affection, and gratitude.

China pinks (D. chinensis) and sweet William (D. barbatus) are mildly toxic to humans and pets and cause skin irritation. Other Dianthus, such as carnations (D. carophyllus), have edible petals.

How long does a dianthus bloom?

Most Dianthus varieties have a long bloom time that may last from spring through summer.

How many types of dianthus are there?

It’s estimated that there are about 300 species within the Dianthus genus, and thousands of hybrids, cultivars, and varieties. 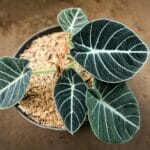 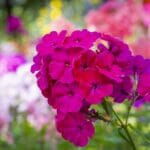