If you’ve ever strolled through a summer garden full of bright colors, you’ve likely seen Dahlias in person. These are some of the most commonly grown and popular flowering plants worldwide. With bright colors and overlapping petals, Dahlias are also a common cut flower used in spring and summer bouquets. In addition to their profound meaning and symbolic value, dahlia flowers also provide a host of uses and benefits. 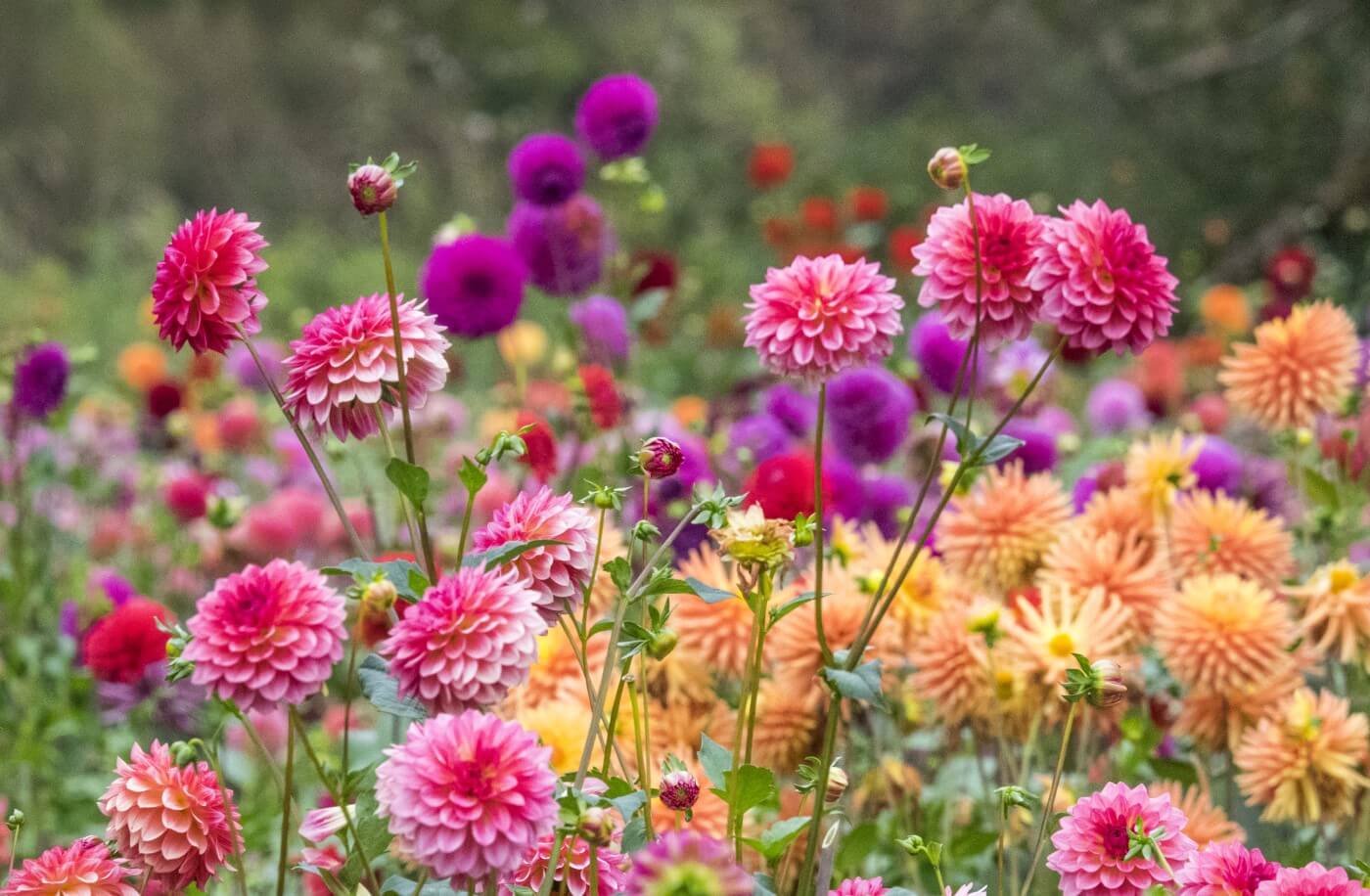 Dahlia plants were originally a foraged food source and used as a water-carrying device thanks to their hollow stems. Today, they are primarily grown as a cut flower and used in weddings and bouquets. Dahlias symbolize resilience, wildness, positivity, and growth.

History and Origins of Dahlia Flowers

Dahlias have been popular garden and cut flowers for hundreds of years now and can be found on almost all continents. Yet they weren’t always popular and were once only found in certain parts of Central America. As one of the earliest New World flowers imported into Europe, Dahlia tubers were once so expensive a single one could fetch a small diamond in trade. They’re thankfully a lot more affordable today.

Dahlias grew wild for centuries in the mountainous areas of Mexico and Guatemala. It’s not believed that the flowers were actually cultivated by the Aztecs, although they may have gathered them as a foraged food source.

It’s also thought that the Aztecs used the flowers as a ritualistic symbol from a handful of carvings left behind showing a shape similar to the Dahlia bloom. Not much is known for sure about Dahlias and how they were used, traded, or symbolically valued during this period.

It is believed that the large Tree Dahlia was used to carry water in its hollow stems, earning it the name Acocotli in Aztec, which means “water cane.” This Tree Dahlia was the first species that explorers encountered and, for many years, was believed to be the only type native to the area. Smaller and more colorful dahlia varieties were only discovered decades later, in the 1600s.

Explorers from Spain first recorded information about the wild Dahlias they encountered in 1570. These were the giant Tree Dahlia used by the Aztecs. These drawings and writings weren’t published for almost 100 years, and then it took over another century for Dahlias to actually travel to Europe.

In 1789 the first parts of the plant were finally received in Madrid’s Royal Gardens. Three distinct species were grown from those samples, Dahlia pinnata, D. coccinea, and D. rosea. These became the backbone of the European Dahlia breeding world for many years until new specimens were imported.

How Dahlias Got Their Name

The genus was named by the botanist at the Royal Gardens in Madrid who was responsible for growing the plants from the samples. His name was Antonio Jose Cavarilles, but he named the plants’ Dahlias after Andreas Dahl, a well-respected Swedish botanist. Prior to the use of that name, the plants were known only as Acocotli or Cocoxochitl.

How Many Dahlia Varieties Are There?

Dahlia is technically a genus that includes thousands of different plants. There are over 40 different species that make up the genus in 14 different groups based on native range and flower type. Thanks to centuries of dedicated breeding and development, over 20,000 named cultivars and varieties are currently available.

The original interest in Dahlia plants that led to their import into Europe was not based on the beauty of their flowers.

Indeed, Aztecs largely didn’t admire them as ornamental plants either but rather as practical ones. In addition to using the stems of the largest species as a water-carrying tool, they ate the tubers as a food source.

Aztecs mostly gathered wild Dahlia roots, and there is little evidence of their early cultivation. But when the plants were first imported and grown in Spain, it was a potential food source for farming. The root tastes bland and like a cross between potato and celery, with some species being too bitter for palatable eating.

Modern Dahlias can be eaten this way, but care must be taken to ensure you’re only eating an actual member of the correct genus.

Other Benefits and Interesting Dahlia Facts

Dahlia flowers come in almost all the colors of the rainbow, even pale white and yellow varieties. However, there are no blue Dahlias and few purple varieties.

Even the infamous Black Dahlia is a name only, as the only dark-colored Dahlia blooms are burgundy or dark red. With dahlia varieties available in almost every color and combination of shades, it’s possible to find a Dahlia to match every garden.

Aside from variations in color and petal shape, the Dahlia has a rich symbolic history to offer the flower arranger or gardener.

Due to their bright colors and habit of growing on tall, singular stems, Dahlias tend to carry a meaning of positivity, good energy, and happiness.

They also tend to symbolize standing out from the crowd and making your own path. These modern connotations are common to both uses in bouquets and for permanent symbolism such as tattoos.

However, Dahlia flowers have had slightly different associations in the past. Not all of them have been positive, depending on the culture. It is the national flower of Mexico, but this was only a relatively recent addition and not a long-standing part of their history.

During the Victorian era, Dahlias gained religious associations and were connected to the resurrection of Jesus. They also were considered a symbol of the everlasting life promised to faithful followers.

However, this changed as time went on, and the flower lost most of its spiritual meaning. Even within the Victorian era, the meaning shifted from a religious one to a symbol of passion and everlasting love.

In the culture of Thailand, the Dahlia flower has acquired an entirely different meaning than the rest of the world. While the flowers thrive there as a perennial due to the warm temperatures, many people avoid giving them as gifts due to their symbolism.

The plant was first called “rak rae”, a term that means “unstable love.” This gave it a somewhat negative association with obsession or fleeting romance. The name was eventually changed to a term that means “first love” instead, but it still carries somewhat of a mixed meaning in Thailand.

Dahlia flowers are a common wedding bouquet addition for modern brides who want color options they can’t get from other, more traditional options. Thanks to its association with love during the Victorian era, Dahlia blooms remain popular today as well as a wedding flower.

They’re less commonly sent as a passionate declaration of love, but they still feature in fun bouquets for modern weddings.

As mentioned above, the Victorians associated two distinct and very different sets of symbolism with this flower. First, it was a potent religious symbol for Christians who wanted something bright and colorful to counteract the dreary sentiments of the time. The flower’s resilience and ability to grow tall and colorful out of muck made it an inspiration.

Yet this meaning shifted with time and evolved into something new before the Victorian era ended. By the close of the period, the Dahlia was considered a symbol of everlasting love and beauty instead. It was a romantic symbol that was sometimes used for wedding decorations, a practice that continues to this day.

All true members of the Dahlia genus are safe to eat in moderation. Both the colorful petals and the tuberous roots are edible raw, or cooked. If cooked, the petals may lose their color, so try using them raw on salads. Try cooking a few roots the next time you’re dividing or moving Dahlias.

An interesting flower with a long history to match its bold appearance, the Dahlia deserves a second look thanks to its host of benefits and uses. These flowers are easy to grow when planted during the right time of year, but they’re also edible. 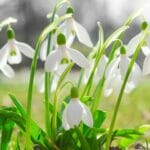 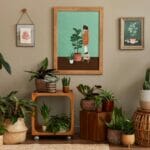