The Meaning, Symbolism, and Cultural Significance of Black  Lotus Flowers

In this guide, we’ll take you through everything you need to know about the meaning and symbolism of black lotus flowers. The beauty and mystery of a black lotus flower go beyond its aesthetics and are considered sacred by many cultures and religions.

Different color lotus flowers are viewed as beautiful and often mysterious in their own way. While some colors are prevalent, one hue that is a bit of an enigma in terms of its spiritual significance is the black lotus flower.

In Buddhism, the lotus flower takes on many spiritual meanings. Each color has its own unique symbolism, but the black lotus is somewhat of a mystery.

It’s fair to think of the black lotus as the counterpoint to the deeply symbolic white lotus flower. Often, the Buddha is shown to be sitting on a fully bloomed white lotus flower in the lotus position. That is believed to represent that a person’s spiritual awareness and heart are not yet open until they reach enlightenment from the inside out through teachings.

While the petals are white and pure, the plant’s roots, by stark contrast, are deeply embedded in muddy water. It represents the significant contrast between light and dark, clean and dirty.

Black is a color that often invokes fear and uncertainty. Black is deemed a grave and sinister color, and its meaning often includes death and endings. However, at the same time, it’s also considered a color that represents power, authority, and rebellion. Black is also frequently the color of sophistication.

In Hinduism and Indian mythology, the black lotus was widely described. It represented the deities Arjuna, Draupadi, and Lord Krishna.

The Hindus believed the black lotus to represent the absence of color and light. It symbolizes darkness, death, sophistication, power, authority, and rebellion.

Christianity holds many symbolic meanings of the lotus flower as well. Typically, it focuses on the white lotus flower, but the black bloom may represent death and rebirth, darkness, and the search for the meaning of life.

Interestingly, the Saint Thomas Cross displays a lotus flower underneath the emblem.

In Ancient Egypt, the lotus flower, in general, is said to symbolize the sun and rebirth. When considering a black lotus flower, it’s fair to believe that it represents darkness, the moon, and death by contrast.

According to the Book of the Dead, the Egyptian text that paid tribute to those that had passed, the black lotus symbolizes death as a spell to transform the dead into lotus flowers.

Ancient Egypt also marks a time when lotus flowers were often depicted in caves in the form of hieroglyphics. Both upper and lower Egypt were believed to be unified through those works of art.

The lotus can also be traced back to Greece through the Lotus Eaters. According to Greek mythology, the Lotus Eaters appeared when Odysseus and his crew made their return from Troy.

Zeus created a storm that redirected Odysseus and his men to Cape Malea, which is also known as the land of the Lotus Eaters.

The Lotus Eaters appeared as normal humans and innocent, but they were mischievous creatures who cursed the men when they ate lotus fruit, causing them to become lazy and forgetful.

The Ancient Romans viewed the lotus flower as the bloom to use for funerals. The white and black lotus flowers are thought to represent the past, present, and future life and death and rebirth, respectively.

The Western world largely views the black lotus flower as meaning birth and reincarnation. In Chinese culture, however, they are viewed as symbolizing happiness within a marriage and femininity.

In Japan, lotus flowers are both enchanting and spiritual. The lotus plant itself is believed to symbolize purity of both body and mind as well. Additionally, Japan and China both use the lotus in their religious ceremonies. 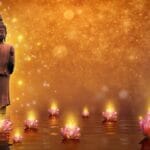 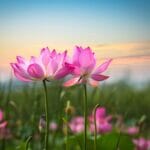 The Spiritual Meaning of Lotus Flowers