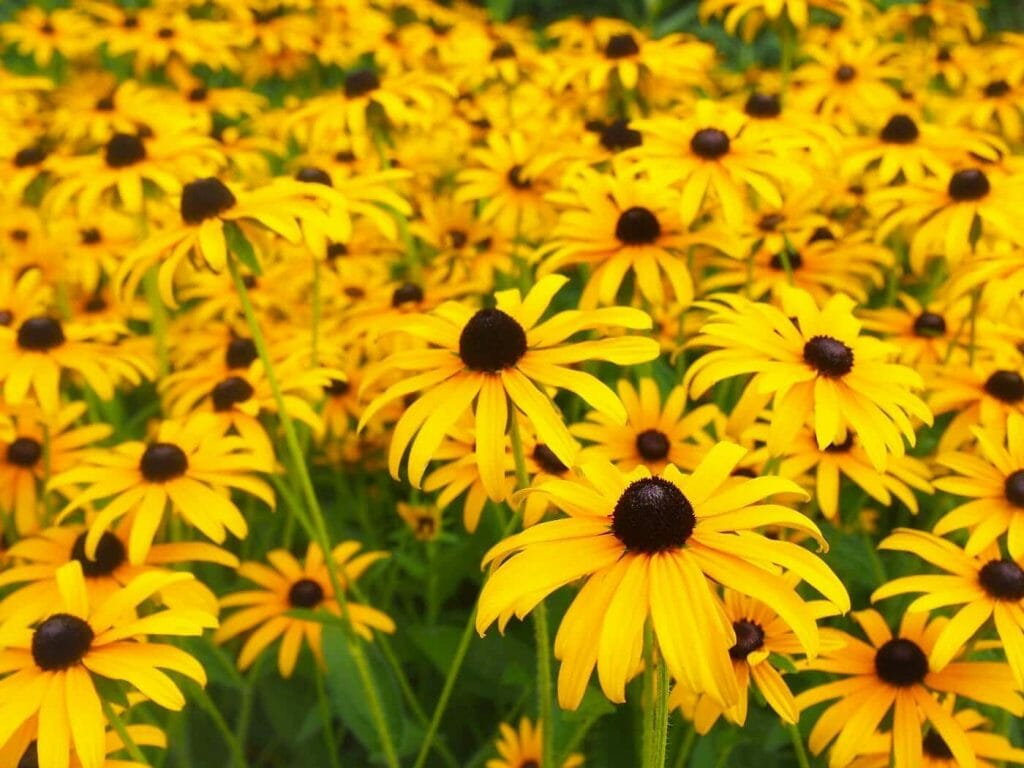 You’ll find Black-Eyed Susan flowers growing in the wild throughout Canada and the United States. These perennial beauties spread across open meadows, and their intriguing name reminds us of an enchanting fairy tale from childhood.  Today we know them as the lovely plants with yellow petals and a dark interior that dot the countryside and landscape. But where did they get that name? Is there any significance behind these wildflowers? Here we’ll take you through everything you need to know about Black-Eyed Susan flowers including their history, origins, meaning, symbolism, and the best gifting occasions to share these blooms with friends, family, and loved ones.

Time to learn what these flowers are. Are they just meadow decorating weeds? Do people grow them in their gardens? Where exactly do they grow? Find out exactly what’s going on with Black-Eyed Susans, where they come from, their scientific information, and even where their legendary name comes from.

There are 4 main varieties of Black-Eyed Susan Flower (Rudbeckia Hirta) commonly found throughout the United States and Canada. These include:

They form part of the Asteraceae family of flowers which includes the likes of sunflowers, aster, and daisies. You can see the resemblance in their long yellow petals surrounding a seeded core.

There are numerous hybrids and cultivars of Black-Eyed Susan as well including the Prairie Sun, Moreno, and Irish Eyes. Some of the most popular hybrids for home gardens include the “Indian Summer,” “Toto,” and “Double Gold”.

The Black Eyed Susan or Rudbeckia Hirta’s history starts in North America. The flower originated there and was brought to Europe in the 1700s. Legendary botanist Carl Linnaeus named them in 1753 after his mentor Olaf Rudbeck.

What’s more, Black-Eyed Susans were crowned the state flower of Maryland in 1918 and were designated the floral emblem by the general assembly.

We already mentioned where the first half of the Latin Rudbeckia Hirta comes from (Rudbeckia as in Olaf Rudbeck). “Hirta” means rough and hairy, and Linnaeus gave it to the flower because of those particular characteristics.

The flower’s more common name, “Black-Eyed Susan,” has a fascinating backstory. Many believe the Black-Eyed Susan is derived from an 18th-century poem by the same title written by John Gay. The poem is about a woman (black-eyed because she’s been crying) searching for her lover William. William is a sailor, so Susan comes to his ship and asks for him.

The poem related to the flower because Black-Eyed Susan bloomed simultaneously with another flower known as Sweet William, symbolically representing the lovers finally reuniting.

Native Americans used the Black-Eyed Susan for several salves and herbal mixtures. Some herbalists still practice these therapeutic methods along with other uses of the flower today.

Today, herbalists recommend using the roots as a tea to treat snake bites and colds in children.

A root wash is also possible for external application on sore and cuts to reduce swelling. It can fight some mild infections and even earaches. Herbalists also found it to have immuno-stimulant influences.

However, farmers do often grow Black-Eyed Susans to feed and nourish wildlife. Animals like bees and butterflies love the flowers, but you can even attract other flower eaters like deer and rabbits.

Most people use Black-Eyed Susans for ornamental purposes. They will make great border flowers for your garden and are also excellent at filling up empty space between color complementing plants.

They might not be the best for a very pristine and pruned garden since they grow in such thick clumps, but they will certainly fit with any wildflower or more casual assortment.

Like most flowers, the Black-Eyed Susan is more than just a plant. Culturally and symbolically, it has many meanings, and experts see it from multiple perspectives. Read below to learn more about the message behind this flower.

Despite their name, the center of the flower from which the name derives is actually brown. You can identify the variants by both their color and their petal pattern. In terms of color, they usually range from yellow to orange, but some variants can go deeper, even red and purple.

Typically, yellow flowers symbolize happiness and friendship. When you see yellow flowers in movies, it almost always represents a happy moment or some kind of optimism. When looking at them generally, Black-Eyed Susan’s could embody this same charm.

The Symbolism of Black-Eyed Susan Flowers

Symbol specialists have long associated the Black-Eyed Susan with Justice. They inspire both motivation and positive change.

The flowers could also be associated with childhood. They do bring about images of children running through the meadows and these flowers with a sense of awe and overactive imagination.

The most significant cultural tie to Black-Eyed Susans started in their home continent. Native Americans used the flowers for their medicinal properties. They grew all over the plains of North America and were a readily available resource to multiple tribes. They would use the roots to create teas and root baths the same as herbalists use today.

One of Maryland’s most prominent literary awards (and a rather famous mark nationally) is the “Black-Eyed Susan Award,” a student’s choice award meant to promote literacy and book fandom throughout the state. The award has been in place since 1992, students choose their favorite book, and the winner gets an award mailed to their house.

First of all, keep in mind the bloom season is also the best for decoration. That means you should only use Black-Eyed Susans for events and gifts between mid-summer and early autumn.

The flowers complement a host of gift baskets, bouquets, and floral arrangements and are suitable for all sorts of occasions including birthdays, anniversaries, thank you messages, and celebrations.

Next, don’t be afraid of too much purple. Many floral designers agree that purple and pale yellows contrast quite nicely in an arrangement’s color scheme. They also pair well with perennial grasses and can make great border flowers for any annual garden.

How to Grow Black-Eyed Susan Flowers at Home

In terms of growing tips, there are a few things you should know. For the best seed germination, you’ll want to plant your Black-Eyed Susans in spring when the soil has reached at least 70°F.

The flowers will grow in partial sun but prefer full exposure. If developed properly, the flowers can reach up to one or two feet tall. They’ll reach this ultimate height after one or two years of growth.

Plant from March-May and they’ll happily bloom between July and September. Depending on the variety, they can survive in hardiness zones 3 – 9. What’s great is they’re pretty tolerant of a range of soil structures and will quickly spread across an entire field or meadow surprisingly fast. You can drop some seeds and come back to an enormous patch of color come bloom season.

They are friendly to bees and are a favorite of the honeybee.

If you go through all the effort to grow your flowers, you want them to last a long time. Learning a few simple techniques will help your flowers last longer. Read the tips below, and you can keep your living room vase colorful for that little bit longer.

When harvesting your Black-Eyed Susan flowers, you’ll want to cut them right as the bulbs start to open. This will ensure you get the most time out of the bloom. When you cut the flower, make sure to cut the stem at a slight angle.

The longer the angle, the more opportunity your Black-Eyed Susan has for water intake. Once it’s cut, put it in a glass of room temperature water immediately. If the cut end remains in the air for too long, it will seal over and dry out.

After the flower is sitting safely in its vase, remove any leaves or stems under the water to prevent rotting. The water level should be about halfway up the stem. Changing water is vital. Every two days, completely dump the water and replace it.

Keep in mind, you have to get the stem in the water again as fast as possible to keep it moist to prevent it from closing.

Find a brightly lit room to keep the vase in but protect it from direct sunlight. Too much sun will dry out the flowers much faster. Also, keep it away from any fruit. The Ethylene gas in the fruit is toxic to flowers and will cause them to wilt.

Steeped in history, spanning the arts and ancient cultures, these beautiful flowers are prized for their stunning hues and intimate structure. Whether you’re growing your own in your garden at home or shopping for a captivating wildflower arrangement, the Black-Eyed Susan is a firm favorite come spring and summer each year. Enjoy! 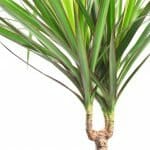 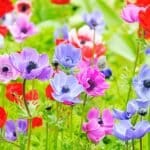 How to Cut Back and Deadhead Anemone Flowers

The Meaning and Symbolism of California Poppies

How to Water Anemones (Essential Guide)

How to Cut Back and Deadhead Zinnia Flowers

When and How to Water Zinnia Flowers