The Meaning, Symbolism, and Cultural Significance of Anthurium Plants

Anthuriums are spectacular tropical plants that are commonly grown as houseplants. Also known as the flamingo flower or laceleaf, these extravagant aroids are highly-prized for their enormous heart-shaped leaves and multitude of uses and benefits. Along with their show-stopping beauty, anthuriums carry symbolic meanings associated with abundance, hospitality, love, and luck. In this article, we’ll learn all about the meaning and symbolism of anthurium plants around the world today.

The Meaning & Symbolism of Anthuriums – The Essentials

Although they’re commonly known as the flamingo flower, anthuriums don’t actually have true flowers. Instead, the slightly waxy or velvety heart-shaped leaves form a spathe. This is essentially a brightly-colored leaf (also known as a bract) designed to entice insects to pollinate the plant.

Protruding from the stem of an anthurium is the spadix – a spike-shaped cluster of tiny flowers ranging from white to yellow. As insects are lured in by the spathe, they clamber over the spadix and pollinate the anthurium.

Most anthurium varieties have large heart-shaped leaves in various shades of green. These varieties, like Anthurium crystallinum, also have prominent cream or white veins spanning each leaf. Two of the more traditional anthurium species – Anthurium andraeanum and Anthurium scherzerianum – can have glossy red spathes. Other colors include pink and white.

Anthuriums are toxic to both humans and animals. The leaves are poisonous if ingested and the sap can cause eye or skin irritation.

They’re also relatively easy to propagate if you’d like to expand your anthurium plant collection.

Anthuriums originated in the jungles of Colombia and other parts of Central and South America. During the 1850s, an Austrian explorer called Karl von Scherzer discovered an anthurium species in Colombia. The plant was named Anthurium scherzerianum as a result.

New species were discovered rapidly, with 183 anthurium varieties recorded by 1860. Now, we know of approximately 1,000 individual types of anthuriums.

Most anthuriums are exceptionally beautiful, but there are a few particular varieties that stand out. Here are some of the most popular types of anthuriums:

The name Anthurium originates from two Greek words – “anthos”, which means “flower” and “oura”, meaning “tail”. The literal translation into English means “flowering tail” due to how the spathe and spadix are arranged.

What Regions Are Anthuriums Native to?

Anthuriums first originated in the Colombian jungle but are now found throughout tropical areas of Central and South America. Anthuriums can be found in regions like Argentina, northern Mexico, and some of the Caribbean islands.

The Meaning, Symbolism, and Cultural Significance of Anthuriums

The colorful displays of anthuriums are also packed with meaning and symbolism. Anthuriums have been celebrated in different cultures and time periods, so let’s explore this symbolism.

General Meaning and Symbolism of Anthuriums

In many traditions, anthuriums are used to represent hospitality. The gorgeous colors of these tropical houseplants make a space feel welcoming and inviting. Anthuriums can “bloom” for long periods, making them excellent houseplants for adding impact and interest to any space. Anthuriums are sometimes known as the hospitality flower.

Anthuriums are also believed to symbolize happiness due to their uplifting colors. The stunning heart-shaped spathes are typically green, but some varieties can also sport red, pink, or white spathes. Growing anthuriums is seen as a way of cultivating happiness.

Anthuriums also represent abundance and wealth. These showy houseplants certainly look regal thanks to their big, prominent leaves or brightly-colored spathes. The individual colors of these bracts can also have different meanings.

Pink anthuriums, like some cultivars of Anthurium andraeanum, represent femininity and womanhood. Pink anthuriums make ideal gifts for women who have recently given birth. They can also be a more unique gift for Mother’s Day instead of traditional carnations or roses.

Green anthuriums, like Anthurium crystallinum or Anthurium magnificum, represent growth, hope, and strength. This color of anthurium is a good way of reducing stress and providing a visible link with nature.

Some anthurium varieties also have breathtaking purple spathes, like Anthurium andraeanum. Since ancient times, purple has been associated with nobility and royalty.

Inspired by feng shui, Chinese New Year celebrations also prize the anthurium as a symbol of prosperity and good fortune for the year ahead. The association with prosperity may be inspired by the long bloom time of anthuriums – they last for two or three months.

The link between anthuriums and love may originate from Greek mythology. According to one story, Cupid used anthurium flowers to create his arrows that could make people fall in love. This helps explain why red anthuriums are traditionally associated with love, lust, and romance.

Because they have so many meanings, anthuriums make excellent gift ideas for several major occasions. Different colors of anthurium can suit different occasions.

Red anthuriums symbolize love, lust, and romance – making them excellent gifts for Valentine’s Day. However, red anthuriums have also become traditional houseplants for Christmas alongside other plants like poinsettias.

Pink anthuriums represent femininity, making them ideal presents for Mother’s Day. You can also use pink anthuriums as a gift for a partner or friend who has recently given birth.

In general, anthuriums make great housewarming gifts because they symbolize hospitality and happiness. Anthuriums are also good presents for encouraging good luck, especially if you want to give someone a boost with their love life. According to feng shui, anthuriums represent good fortune in romantic relationships.

What does an Anthurium flower symbolize?

According to feng shui teachings, anthuriums are believed to stimulate good luck for one’s romantic endeavors and relationships. Anthuriums are also thought to encourage prosperity if used as a decoration during the Chinese New Year.

Do Anthuriums come back every year?

Anthuriums are perennial tropical houseplants that will bloom every year if kept in the right conditions. Anthuriums require high humidity levels, warm temperatures, medium indirect sunlight, slightly acidic soil, regular watering, occasional fertilizing, pruning, and repotting. They are largely pest and disease resistant indoors and typically bounce back from common issues such as drooping, or yellowing anthurium foliage with due care.

How long do Anthurium flowers last?

Anthurium “flowers” are actually specialized leaves called spathes. These colorful leaves can last for up to two or three months.

Do Anthuriums flower more than once?

As well as boasting stunning good looks thanks to their glossy, heart-shaped spathes, anthuriums are also packed with rich meaning and symbolism. Anthuriums are believed to represent qualities like abundance, hospitality, and happiness.

Red anthuriums are particularly symbolic and are associated with love, romance, and even lust. In feng shui, anthuriums are used to cultivate good fortune in romantic relationships. It’s no surprise that so many people fall in love with anthuriums.

If you’re looking for your next anthurium plant to add to your collection, see our in-depth guide to the best plant shops delivering anthuriums nationwide. 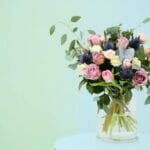 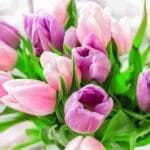 How Big and Fast Do Peace Lily Plants Grow?

How Much Light Do Ficus Audrey Plants Need? (Essential Tips)

When and How to Repot Ficus Audrey Plants (Essential Tips)

When and How to Water Ficus Audrey Plants (Essential Tips)

Where to Position Ficus Audrey Plants in the Home