Loved by some and disliked by others, Wisteria is a complicated plant that features bountiful purple blooms in eye-catching cascades. Wisteria may be controversial to grow in some parts of the world, but it is full of meaning that can be appreciated even without planting it. Here we’ll take you through everything you need to know about Wisteria flower meaning and symbolism, their history and origins, uses and benefits, plus learn about their cultural significance around the world.

Wisterias symbolize romance in most cultures where the plants are native. In Korea in particular, the Wister flower carries the meaning of devotion that transcends death. The Japanese also consider Wisteria a symbol of good luck, success, and longevity.

The common name Wisteria refers to an entire genus of related plants. There are currently 10 Wisteria species included in the genus, all of them flowering. The genus is a part of the Fabaceae family, which includes many other types of legumes and peas.

All of the various types of Wisteria generally grow as climbing vines, although they also have the unique ability to grow as self-supporting small trees if there is no support nearby. Wisteria plants are primarily known for their purple cascading flowers that form in clusters almost like bunches of grapes. All varieties feature fragrances, which can range from musky to sweet.

The Asian varieties of this genus that feature the most beautiful flowers and attractive fragrances were only discovered in the 1800s by European botanists, although they had been cultivated for centuries in their native ranges.

Japanese and Chinese Wisteria is the most commonly planted varieties because they have the showiest flowers. However, species native to North America are often recommended for that continent since the Asian varieties can become invasive. ‘Caroline’ is a Japanese Wisteria cultivar popular for blooming earlier than other types, while Silky Wisteria cultivars like ‘Shiro-Kapitan’ offer white flowers rather than the standard light purple.

Wisteria is both the common and scientific name for the plant. Multiple sources claim that the plant’s name was given in honor of Caspar Wistar, an American physician. However, stories differ based on which botanist was believed to create the name in his honor. Thomas Nutall, one of the botanists believed to have named the plant, also wrote that he enjoyed the pleasing sound of the name.

What Regions are Wisteria Flowers Native to?

Wisteria species are only native to a handful of areas scattered around the world. Korea, Japan, and China are the native range for the Asian varieties. In North America, other varieties are native to the Eastern part of the United States and Southern Canada only. Wisteria establishes easily in most temperate areas without extreme winter temperatures, making it invasive in some parts of the world. Its popularity as an ornamental plant has contributed to the issue.

When are Wisteria Flowers in Season?

Wisteria tends to bloom in mid-spring, which is May to June in most parts of its native range. Some varieties have been bred to bloom early, with the first flowers appearing as early as March. Wisteria typically flowers over a 4 to 8-week window between the emergence of the first flowers and their disappearance.

Uses and Benefits of Wisteria Flowers

Wisteria has no medicinal or edible uses because all parts of the plant contain a toxic compound. In fact, the seeds in particular tend to cause poisoning in pets and children that are curious enough to eat them. It’s best planted where it can be appreciated but not easily accessed. Bees and other pollinators are attracted to the cup-shaped flowers, so it’s worth planting for that reason alone.

Wisteria comes in a wide variety of colors mainly due to careful breeding over the centuries. The individual color meanings for this flower include:

The Cultural Significance of Wisteria Flowers

Wisteria has a specific and unique meaning in each of the areas where it’s native. Each culture developed its own myths for the flower, but since it didn’t travel until the 1800s, it doesn’t figure as much into the folklore of the cultures where it was introduced.

In Japan, the Wisteria vine is primarily a symbol of longevity. There are plants in Japan recorded to have reached an age of 144 years or more. Wisteria can also symbolize both intelligence and good luck in Japan as well.

Flowers from the Wisteria plant are commonly given as gifts to travelers and newlyweds to wish them well in new endeavors or travels. As in Europe, purple flower symbolism was a color restricted to higher-ranked members of Japanese society. This association with wealth and royalty continues to make it an indicator of good breeding today. It continues to feature on the family crests of many Japanese families.

Chinese culture also holds the Wisteria blossom as a symbol of good luck and success. However, it also holds a strong romantic connotation in this culture.

In Feng Shui, its drooping habit is considered to represent humility and kneeling before someone else to honor them. This can indicate humbling yourself before a romantic partner or love interest in order to express your emotions for them. It is a common flower used for weddings and other romantic occasions.

In Korea, Wisteria took on the most romantic meaning of all. It directly developed a myth that involved twin sisters who were both in love with the same man. They decided to drown themselves since they couldn’t settle their argument over who should get to marry him. They were reunited in death and transformed into the Wisteria vine. One sister became the grasping and twisting stem, while the other became the delicate leaves and flowers of the plant. The man that they loved also threw himself into the pond and became a nettle tree, which the Wisteria vine tends to grow on in Korea.

Since Wisteria did spread into Europe and rapidly gain popularity during the Victorian era, it earned a place in the historic Language of Flowers.

As in other cultures, Wisteria vines earned a reputation for their clinging growth pattern. Victorians would include a cluster of delicate purple blossoms in their bouquets when they wanted to send a message of overwhelming desire and passion.

In particular, the Wisteria was considered to say “I cling to you” as it would cling to the branches of other trees. While Wisteria was not always available and required special care to cultivate in Victorian England, it was considered worth the effort for the elite who wanted to make a strong statement with an unusual imported flower.

Wisteria sends such a strong message of romance in most cultures that they’re usually best used for declarations of devotion or for wedding arrangements. They are graceful enough to add an elegant touch to wedding decorations in particular.

If you want to give a live Wisteria vine as a gift to indicate how your devotion will grow over time, make sure it’s a variety that can stay potted or won’t be invasive in your area.

Wisteria is graceful, beautiful, and has a truly romantic meaning. Consider growing as an arbor for taking photos with a loved one or for making romantic declarations under.

Thanks to its longevity, a well-contained Wisteria vine can produce flowers for hundreds of spring seasons to come. With varieties native to both Asia and North America, it’s possible to find a vine that isn’t invasive no matter where you live.

If you don’t want to worry about the vine spreading, just admire the beautiful cascading flowers as cut blossoms in bouquets.

Is Wisteria a lucky plant?

Some cultures, especially Japan, consider it a symbol of luck. It is also a symbol of romance, devotion, and longevity.

What month does wisteria bloom?

Wisteria blooms in mid to late spring, which is usually April to June in most areas.

Where does wisteria grow best?

Wisteria prefers temperate areas without extreme winter low temperatures. In the US, they tend to thrive in USDA hardiness zones 4 through 9.

Do wisteria flower more than once?

Wisteria flower each year, but they only flower for a window of one to two months in the spring.

Is Wisteria poisonous to humans and pets?

All parts of the Wisteria plant are poisonous to humans and pets alike. Keep the seed pods collected in particular to keep kids and pets from chewing on them. 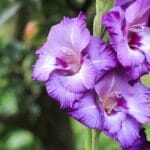 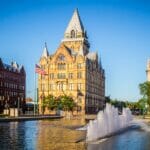