The Best Locations for Peace Lilies to Thrive

The Peace Lily has long been a symbol of peace, hence its name. Yet it has a more nuanced meaning in many cultures, especially in the Chinese practice of Feng Shui. Assigning it a spiritual value can add complexity to the placement process for this plant. Yet no matter where it’s popular to keep a Peace Lily for its energetic value, you’ll also need to consider the ideal peace lily care needs for the plant to thrive. Find a healthy balance between both with these essential tips on the best position for peace lily plants in the home.

Where to Place Peace Lily Plants in the Home – The Essentials

Based on Feng Shui principles, a Peace Lily plant should be located in the Eastern or South-Eastern part of the home. It needs little light but prefers warm and somewhat humid environments.

The common Peace Lily is more correctly known by its scientific name, Spathiphyllum. This is actually an entire genus of related plants all commonly called Peace Lily.

You may also see this plant referred to as a Mauna Loa Lily, a Spathe Lily, or a White Sails plant. Spathiphyllum is part of the Araceae family, which includes many plants that create a spathe-type flower, such as Elephant Ear and Taro. Peace Lilies are just one of many groups of plants within this family commonly grown as houseplants since many varieties within Araceae thrive in indoor conditions.

Since there are around 40 different Spathiphyllum varieties, they have a native range spread worldwide. Many are native to Central and South America. Some of the species are found only in Mexico, while others are from the Western Pacific islands. A few rarer varieties call the Malay Peninsula home.

Most of the Peace Lily varieties commonly grown as houseplants are native to Central America. Some are grown outdoors in the warmest climates, where nighttime winter temperatures rarely drop below the mid-50s. This plant can only handle the briefest periods of colder weather.

The Peace Lily is an acaulescent plant, which means it doesn’t have an apparent or visible stem. Instead, it produces dozens of dark green and somewhat narrow leaves that are individually supported by thin stems.

Flowers appear and rise above the foliage on their own stems as well. The flowers tend to be white and consist of a sizeable petal-looking leaf, known as the spathe, and a smaller spiky center that is the actual bloom. Some varieties have lighter or variegated foliage and flowers.

They all tend to stay around three to four feet in height and width when reaching their maximum mature growth.

When Do Peace Lilies Flower?

Peace Lily plants can flower in the spring or fall. Only mature plants will put out flowers, so if your plant is still only in an 8-inch pot, it’s not likely to start blooming yet. Flowers are more common on plants at least two feet tall and wide.

Make sure the Peace Lily is getting plenty of water, has well-draining soil, and is in a humid environment if you want to trigger flowering. The abundant blooming you’ll see on these plants in a florist’s shop is triggered by the use of specific plant hormones. This allows for forced blooming even on young plants.

At home, you’ll only see one or two flowers at once, even from the healthiest plants. Applying fertilizer a month or two before spring (and occasionally pruning the plant) will help trigger flowering when the light conditions are right. Peace Lilies don’t need a lot of light, but natural variations in day length help them know when to put out new blooms.

Caution Around Pets and Children

Peace Lilies are only considered mildly toxic because they contain irritating oxalic acid crystals. They can cause irritation if consumed, but most children and pets won’t try to due to the burning sensation if the leaves are chewed.

Keep the plant away from dedicated chewers or very young children to avoid any opportunities for irritation. It’s still one of the less toxic houseplant options, making it a safe choice for most households.

Plants in general, especially live ones, tend to symbolize the element of wood in the practice of Feng Shui. Wood is an element of stability, vitality, growth, warmth, and support of others. It combines flexibility with strength and both masculine and feminine properties. It’s considered to balance out metal, so adding a plant like a Peace Lily to the right spot can make a home feel more welcoming and alive.

Wood appears on the Bagua, or the map of Feng Shui energy in a structure, in two different forms. The Zhèn Trigram in the Bagua represents older and mature wood. Live plants like the Peace Lily better fit into the Xùn Trigram part of the Bagua, representing new growth. This is usually the South-Eastern part of a home.

The Peace Lily is considered a symbol of good health and steady growth. While the color white can be inauspicious in Feng Shui, this plant flowers rarely enough, so it’s not a significant concern.

Its dark green color is considered calming and stabilizing, while its habit of growing many leaves with no one stem helps multiply positive energy within the home. It’s a good choice for bringing vitality and peace to the home at the same time.

Where to Position Peace Lily Plants in the Home

When selecting the proper placement for a Peace Lily, it’s essential to consider both symbolic meaning and the concrete needs of the living plant.

According to Feng Shui

The best placement for a Peace Lily in the home depends on which format of Feng Shui you practice. In Traditional Feng Shui, the South-Eastern part of the home is the best area for living plants of all kinds. Plants also do well in the Eastern part of the home. For this practice, the map of the structure, or Bagua, is aligned based on actual compass readings taken in place.

For Black Hat Feng Shui, the Bagua is laid out with the North side of the map aligned with the front door of the home. While the South Eastern and Eastern parts of the home are still considered good places for plant life, they’re not located with a compass in this method. Instead, you simply follow the layout indicated by rotating the Bagua to match your door alignment. This means that the best part of the home will vary depending on the actual layout.

Peace Lily plants need very little light, making them easier than most houseplants to put in a good Feng Shui position. They can thrive with just the ambient light offered by indoor bulbs. They don’t prefer actual darkness, so keep them out of dimly lit corners where they might be forgotten or attract unwanted peace lily pests and diseases. But at the same time, make sure they’re never exposed to direct sunlight or bright natural light either which can lead to yellowing or drooping peace lily leaves.

Peace lily plants prefer medium to high humidity. They also require warm but not hot temperatures, preferring to stay below 80 degrees F and above 50 degrees F. Avoid any areas that could dip into the 40s since this could shock the plant and kill it.

Peace Lily plants don’t mind being in a bathroom or kitchen area since these rooms can provide extra humidity. Watch out for windows in the South East or Eastern parts of the home since they can direct morning light to the plant in a way that it doesn’t like. Recently repotted or propagated peace lily plants can be particularly susceptible to environmental changes.

Where Not to Place Peace Lily Plants in the Home

Keep Peace Lily plants away from doors and windows since they don’t like drafts or direct light. Don’t let them get too close to direct sources of heat as well or vents that blow out dry air. Keep plants like the Peace Lily out of the bedroom in general, which is believed to interrupt sleep and rest according to Feng Shui principles.

Peace Lily plants can only grow outdoors where temperatures rarely drop below the 50s. If you bring the plant outdoors in a pot for the summer, ensure it stays in the shade throughout the day.

Where to Position Peace Lily Plants – The Final Word

The Peace Lily plant can add beauty and calm to your home, but in Feng Shui, it’s considered a source of vitality. Give it the proper placement so it can thrive and increase your spiritual sense of well-being.

If you’re looking for your next peace lily plant, see our in-depth guide to the best plant shops delivering peace lilies nationwide. 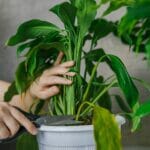 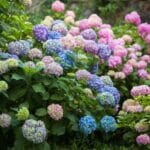