Palms are some of the most elegant and eye-catching plants you can grow in a home. It’s no wonder the Majesty Palm has exactly the name it has, thanks to its regal fronds and tall growth habit. However, this plant can’t fit into every part of the home due to its specific care requirements. Principles like Feng Shui also help determine where a plant like this one might offer the biggest energetic or spiritual benefits. Read on to learn about the best places to position a Majesty palm in your home or office.

Where to Position Majesty Palms in the Home – The Essentials

According to Feng Shui, large house plants like the Majesty Palm are best placed in the Southeast or East areas of the home. This helps stimulate your career, wealth, and connections with new people. Avoid areas associated with the family or children due to the pointy shape of the leaves.

In the wild, the Majesty Palm can reach nearly 100 feet tall. But in your home, Ravenea rivularis is much more likely to stay anywhere from 8 to 10 feet tall at the most.

This palm is part of the Ravenea genus, which includes nearly two dozen other palms that all feature swollen bases to their stems. As part of the Arecaceae family, the Majesty Palm is related to the majority of all other palms on earth.

It’s native to only Madagascar and is barely found there anymore due to habitat loss, with less than 1,000 plants believed to remain in the wild. It’s found only in warm jungle areas, limiting its ability to spread in its native range due to the deserts that surround these regions.

Since it grows taller than many other houseplants that prefer humid and warm environments, it tends to need more light than the average under story plant.

Also known as the Majestic Palm, this plant is distinguished from other types of palms by its long and upright fronds that feature many long individual fingers. This creates a dramatic look, especially for indoor environments.

Feng Shui is a spiritual practice dating back to Ancient China that is primarily concerned with the arrangement of specific structures and features to direct the proper flow of energy.

While it started as a way to lay out important civic centers and tombs of royal family members, it’s now used today for everything from organizing your home to building a better office. In this practice, plants like the Majesty Palm are considered to be energy-generating additions to a space that can boost whatever part of the home you place them in.

However, since they can be too energizing for calming parts of the home, some placements in Feng Shui aren’t recommended. Of course, you’ll also have to consider the practical needs of a Majesty Palm as well when choosing where to put it.

Positions for everything from furniture to doorways and house plants are determined in Feng Shui. This is a map that is overlaid over your home’s floor plan or the layout of any other building or space and aligned according to the compass.

The northern part of the Bagua map should align with the northern compass direction in your floor plan. Once you align the layout, you can see which rooms of your home correspond to which energy centers.

House plants, especially large ones like the Majesty Palm, are considered very potent energy sources that can be overwhelming for smaller rooms or calming areas like bedrooms.

Which Rooms are Most Appropriate in the Home?

Instead, try to place them in the East and Southeast of the home. Both of these parts of the Bagua are associated with the Wood element, which is the element of live house plants.

The Majesty Palm has particularly strong Wood element energy because of its tall, upright growth habit. It’s believed to help stimulate your career, your social connections, and your wealth when placed in these parts of the home.

If these directions correlate with your bedroom or entryway areas, consider focusing on rooms like the study or living room instead. These areas are large enough to handle this palm tree’s height and width without feeling overwhelmed. They also can take advantage of the energy this kind of plant is believed to produce without the room feeling too busy for relaxation.

It’s best to place a Majesty Palm in the corner of a room for bountiful energy production and away from any doors that open to the house’s exterior.

The chief factor affecting where they grow best is their height. These plants don’t like to be pruned or trimmed dramatically, so you’ll want a room with the tallest possible ceiling to let them grow.

A cathedral ceiling or open second story allows this palm to reach its full height. This plant also has higher light requirements than many other popular house plants, so make sure there are large windows or bright plant lights set up in the area you choose.

Where Not to Place Majesty Palms in the Home

The long pointy foliage of this palm’s fronds can be considered particularly disruptive in the practice of Feng Shui.

Consider avoiding areas that correspond to the family or children since the sharp points of this palm can irritate you and others.

Instead, keep it focused on areas that need a lot of stability and focused growth, such as the career and wealth sectors of the Bagua. If you’re following Feng Shui practices, don’t place this plant in the bedroom or near exterior doors leading in and out of the home.

Finally, keep them out of the very center of the home and out of the bathroom as well. This is often a practical consideration and a Feng Shui recommendation due to the size and shape of the plant.

Where to Place Majesty Palms Outdoors

Majesty Palms need to stay warm over the winter, so they’re more commonly moved outdoors only in the summer.

Make sure they’re getting six to eight hours of bright sunlight each day but not too much direct sun in the afternoon. Morning sunlight is the best for palms that are placed outdoors to prevent browning tips and yellow leaves.

If you want to plant a Majesty Palm in the ground, ensure you’re located in USDA zones 9 through 11. Choose a well-drained area that receives plenty of water to ensure the plant grows well all year round.

Try to keep the plant shielded from heavy gusts of wind that can snap the fronds off or cause the individual leaves to become tattered and rough.

Majesty Palms have specific care requirements that must be followed regardless of where you place them in the home.

Keep them out of direct afternoon sunlight, but provide plenty of bright and indirect sunlight for six hours or more daily. A plant light is the easiest way to make this palm happy and prevent stretched-out and drooping growth.

Normal humidity levels are acceptable, but misting the plant is recommended at least once a week. Let the soil dry out well, at least to the first two to three inches, before watering your Majesty palm again.

Keep the plant away from cold temperatures and drafts, never letting it experience air below 55 degrees F or above 85 degrees F. Ensure your Majesty palm soil mix and container has a lot of drainage to keep the roots from rotting.

Majesty palms will also benefit from fertilizing 2 to 3 times during the growing season each year.

Where to Position Majesty Palms FAQs:

What room is best for a Majesty Palm?

Depending on Feng Shui principles, you should place a Majesty Palm in the East or Southeast of the home. Aim for the living room or study for the best benefits.

How far away from a window should a Majesty Palm be?

Try to keep the palm at least three to four feet from any windows, so they aren’t exposed to direct light throughout the day.

Can I put my Majesty Palm in a corner?

A corner placement is recommended by Feng Shui precepts, and it works well for most Majesty Palms as long as the ceiling is tall enough for the plant.

These palms need indirect light and plenty of it. Low-light conditions will leave them pale and stretched out.

These plants are particularly susceptible to cold drafts, so I recommend keeping them away from external doors or drafty windows.

Raising a Majesty Palm can help stimulate the energy flow in your home, but only if you find the proper placement for this large and elegant plant. Make sure you’re selecting a space according to both Feng Shui requirements and the practical needs of the palm, so it thrives while giving you a boost to your career or wealth. For more, see our in-depth guide to the meaning and symbolism of palm trees. 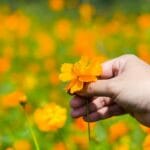 How to Cut Back and Deadhead Cosmos Flowers 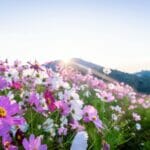