Pothos Plant Meaning and Symbolism Around the World

The Meaning, Symbolism, and Cultural Significance of Pothos Plants

Pothos plants have a number of wonderful benefits, from their low-maintenance nature to their adaptability. They are also rich in meaning, symbolism, and significance, beloved by indoor gardeners worldwide. Whether you’re looking for the perfect Feng Shui plant, financial prosperity, or just an exciting story to tell, the Pothos has it all.

In some regions, Pothos plants are believed to bring good luck and financial prosperity. According to Feng Shui principles, the Pothos can rid your home of negative or stagnant energy. Due to their vigorous growth habits, they also symbolize determination and the concept of eternal life and are associated with the Greek god of longing, Pothos.

The popular Pothos is botanically known as Epipremnum aureum. All true Pothos are part of this species – different cultivars of the same plant. It is named Pothos as it was originally placed in the genus Pothos in 1880, first known as Pothos aureus.

These plants are part of the Monsteroideae sub-family, joining the famous Monstera. They are also commonly confused for climbing Philodendron types like Philodendron hederaceum, which do fall under the same family but are not the same plants.

Epipremnum is part of the Arum family, known as Araceae. This family is characterized by a pointed flower called a spadix, surrounded by a colorful modified leaf. While you’re unlikely to see this flower indoors, as Pothos rarely flower even in the wild, they are common in other members of this family, such as Anthuriums.

Pothos plants have glossy, waxy leaves with a slight heart shape – rounded at the base and pointed at the tips. The leaves grow from long vines that produce aerial roots, allowing the stems to climb nearby structures.

The Pothos is believed to be native to the islands of French Polynesia, residing in tropical forests where they can be found climbing along tree trunks or sprawling along the ground as a ground cover.

You may not recognize this plant when you come across it in the wild, as the leaves and vines grow far larger than they do indoors, with leaves up to 20 inches long. They also develop slits in the leaves under the right conditions, like the Monstera and some Philodendron species.

This plant went through a period of botanical confusion, initially placed in the Pothos genus – then a ‘catch-all’ genus for plants that marginally fit the characteristics.

It was moved to the Rhaphidophora genus in the 1960s and had a brief period as Epipremnum pinnatum before its characteristics were found to be deserving of its own species.

There are many Pothos cultivars on the market, each with its own unique characteristics. The Golden Pothos, the original Pothos species named after the specific epithet aureum, is the most common, but certainly not the only Pothos around:

These are just some of the more popular types, but there are many more to choose from, some rarer than others.

Due to their ability to naturalize quickly, Pothos plants are common in tropical forests worldwide. They have a presence in Southeast Asia, Australia, the West Indies, and Southern Africa.

Pothos has been classified invasive in many regions due to their ability to spread quickly and suffocate surrounding plants. They should not be planted outside, for this reason, kept indoors and within their containers to prevent their spread.

The Meaning, Symbolism, and Cultural Significance of Pothos Plants

The Golden Pothos is one of a few plants believed to bring their owners good luck. They are said to attract positive energy and promote prosperity. Their ability to purify the air and rid it of common toxins, proven in the famous NASA Clean Air Study, contributes to this positive symbolism.

Along with good luck, Pothos plants are said to provide their owners with financial prosperity too. They even have the common name Money Plant in some regions, partly due to their somewhat coin-shaped leaves and party due to the financial gain they offer.

According to some South Asian cultures, keeping a Pothos around will ensure you are never short of cash.

In some areas, Pothos plants symbolize the wonderful qualities of determination. Their long-growing vines and strong growth habit, along with their ability to climb, are said to evoke qualities of perseverance in the face of adversity.

Keep a Pothos in a common area of your home or around your desk as a reminder to keep working toward your goals throughout the day.

Pothos plants are also popular for use in Feng Shui, for their low-maintenance nature and ability to purify the air. But that’s not all they do.

According to the principles of Feng Shui, Pothos plants are also believed to remove negative or stagnant energy from the corners of your home.

Place your Pothos in an unused corner on a cabinet or shelf to bring bright positive energy to a neglected space.

The Pothos is a houseplant that is almost impossible to kill. Its other common name isn’t Devil’s Ivy for nothing. This ability to adapt and survive the harshest conditions for years on end has led some to associate the Pothos with eternal life or the concept of an eternal soul.

The common name of the Pothos is also associated with Greek Mythology. Pothos is one of Aphrodite’s Erotes, a collective of winged gods. Known as the god of longing, Pothos represents yearning or desire, particularly when alone. He also carries a vine with him, which is a connection to wine but also suits his association with the vining Epipremnum aureum.

You will find it hard to scroll through houseplant social media pages without coming across at least one Pothos. They have become one of the most popular plants in the new wave of houseplant obsession, beginning several years ago and showing no signs of slowing down.

They are beginner-friendly, low-maintenance, and look stunning trailing across shelves or from hanging baskets. What more could you ask for?

Keep your Pothos well-watered in a moisture-retentive soil mix. Ensure temperatures remain between 65F and 85F for optimal growth and locate in a room with plenty of bright, indirect light.

It’s also a good idea to fertilize your pothos plant. Feed with a balanced liquid fertilizer to give the plant an extra growth boost at the perfect time, and be sure to repot your pothos plant when it’s outgrown its current potting vessel.

Pothos plants are relatively resistant to common bugs, pests, and diseases though yellowing leaves or leaf loss are common signs of a plant lacking the appropriate environmental conditions to thrive.

If you’re looking for your next pothos plant to add to your collection, see our in-depth guide to where to find the best pothos plants for sale.

Pothos plants are beautiful additions to any houseplant collection. With so many wonderful meanings and positive symbolism, it’s hard not to want at least one, usually more. 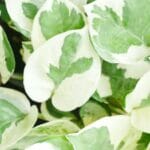 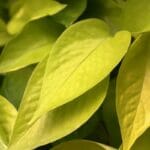