If you’re looking for a flowering ground cover or creeping plant for your garden, trailing lantana (Lantana montevidensis) might be the plant for you. This low-growing shrub sprawls over landscapes while cascading over walls and climbing up fences. It brings color to the garden with many clusters of small flowers that bloom from spring through frost. Here we’ll take you through everything you need to know about how to grow and care for Trailing Lantana (Lantana montevidensis) at home, including planting, soil considerations, light preferences, feeding, pruning, and over-winter care.

How to Grow Trailing Lantana (Lantana montevidensis) – The Essentials

Trailing lantana is native to South America. They can be found growing throughout parts of Argentina, Brazil, Paraguay, Uruguay, and other countries.

The species name montevidensis is an ode to Montevideo, the capital city of Uruguay.

When Lantana montevidensis plants are young, they appear herbaceous. As they grow older, their stems become woody.

The plants have a trailing form with many stems covered in small, ovular leaves.

Many round clusters of small flowers appear at the ends of stems. Each flower has six petals. Purple flowers are the most common, but flowers may also be white, pink, or yellow.

Some varieties produce small, round fruits.

Trailing lantana flowers are popular with pollinators including bees and butterflies.

Trailing lantana blooms for the majority of the year.

In areas with cold winters, expect blooms from late spring through frost. In frost-free areas, trailing lantana may bloom the entire year.

Trailing lantana is a fast-growing plant. It quickly grows up to 16 inches tall and five feet wide.

Trailing lantana works well with other heat-loving and drought-tolerant plants. Try mixing it with taller plants for a contrast in height.

Here are some great options for companion plants:

What are the Best Locations?

Trailing lantana works great in a wide variety of locations, as long as it receives enough sun.

These plants fill in spaces where other plants fail to thrive. Try planting them in bare areas that need to be covered or alongside walls they can trail down.

Trailing lantana is also great for covering eyesores like utility boxes and wells.

Since these plants can withstand high sun and drought, they can be planted up against buildings that create hot microclimates.

What are the Best Times of Year to Plant

In areas that receive frost, you should plant in spring after the danger of frost has passed.

If you live in a frost-free area, it’s best to plant in the spring or fall.

Growing From Seed vs. Transplants

You may grow trailing lantana from both seed and transplants.

Transplants are typically preferred since they allow you to start with larger plants. Additionally, several types of trailing lantana are patented varieties that are only available in transplant form.

If you choose to grow from transplants, wait until the last frost has passed before planting outdoors.

If you want to grow from seed, it’s best to start seeds indoors—plant seeds in potting soil six to eight weeks before the last predicted frost.

Place the seedling trays somewhere warm until the seeds germinate. After seedlings emerge, you need to provide bright light for ten to twelve hours each day. Therefore, place the seedlings near a sunny window or use a grow light.

Once the danger of frost has passed, you can transplant the seedlings outdoors.

Before you plant, check the soil. If it appears wet or compacted, you’ll need to do some work.

Loosen compacted soils by digging up 6-8 inches with a shovel or digging fork. After digging up the soil, mix in some compost to improve aeration, then add the soil back into the hole.

Don’t forget that these plants will spread quite a bit. Make sure to give them enough room to grow without choking out other plants.

Plants don’t like constantly moist soil, so you should avoid any wet areas.

Trailing lantana isn’t too particular about soil pH; a pH between 6.0 and 8.0 is suitable.

After you’ve found a suitable location and amended the soil, planting is easy.

Place a transplant’s root ball in the ground and cover it with soil—water well.

Trailing lantana thrives in full sun. Make sure to plant them in an area that receives at least six hours of bright light each day.

These plants can tolerate a few hours of shade each day. However, more sun will lead them to produce more flowers.

Trailing lantana plants like it hot, or at least warm. They thrive in temperatures between 60-90ºF.

They are sensitive to cold and will die in hard frosts. If plants receive a light frost, their sensitive foliage will likely die. However, the root system may survive and produce new vegetation in the spring.

As far as humidity goes, trailing lantana isn’t too particular. If humidity remains high for an extended period, plants may develop fungal issues.

How to Care for Trailing Lantana (Lantana montevidensis)

When plants are young, water about once or twice a week if you don’t receive any rain.

As plants mature, you’ll only need to water them every one to two weeks.

Trailing lantana isn’t a heavy feeder and doesn’t require much fertilizer. Fertilizing too much can cause brittle plants and a lack of flowers.

It’s best to use a fertilizer that is designed for flowering plants. This will contain more phosphorus and potassium than nitrogen to encourage flowering.

Dilute the fertilizer to half the recommended strength and apply once a month in spring through early fall.

You don’t need to prune trailing lantana, but you can if you want to maintain a certain shape.

If your plants are getting out of control, you can trim the ends of the stems using a sharp pair of pruning shears.

The best way to propagate trailing lantana is by stem cuttings. It’s best to take cuttings when plants are actively growing in the spring and summer.

Trailing lantana is not frost hardy. If temperatures dip below 32ºF, plants will likely die.

If you live in an area that only receives a few light frosts, there is a chance your plants will survive. Even if the foliage dies, the roots may live to produce new growth in the spring.

In cold areas, gardeners often treat trailing lantana as an annual. However, you can attempt to overwinter it indoors.

A few weeks before the expected first frost, trim your plant back so the stems are four to six inches long. Next, dig up the plant’s root ball.

Place the root ball in a large container and move it indoors. You want to keep the plant somewhere that is cool and bright; a bright garage or cool room works well.

Once the threat of frost has passed, you can replant your plant outdoors.

If you are growing trailing lantana in a pot, it’s best to repot every year. This plant grows rapidly and can quickly outgrow containers.

When you repot, choose a larger container and use fresh potting soil.

While deadheading lantana flowers will likely lead to more blooms, it isn’t necessary. Since trailing lantana has so many flowers, deadheading can become quite tedious and time-consuming.

Even if you don’t deadhead old flowers, your plants will produce many blooms.

Common Trailing Lantana Problems and How to Treat Them

Fortunately, trailing lantana doesn’t deal with too many serious problems. However, you should keep an eye out for the following.

If you walk outside to find your plants coated in a white substance, chances are good they have been infected with powdery mildew. This group of fungi typically isn’t fatal, but they can stunt plant growth.

Another issue to watch out for is root rot. This problem is also caused by a group of fungi.

When plants are infected with root rot, their roots cannot take up water and nutrients properly. Therefore, you may notice yellowing or wilting leaves.

Root rot typically occurs when plants receive too much water. Remember that trailing lantana is a drought-tolerant plant that only needs to be watered every one to two weeks.

The only tools you’ll need to care for trailing lantana is a pair of sharp pruning shears.

If you’re looking for a low-maintenance flowering groundcover, trailing lantana is a great choice. While it’s not cold hardy, it will survive heat and drought while empty areas with color.

Trailing lantana are not cold-hardy and will die with frost. However, they can tolerate heat and drought.

How Big Does Trailing Lantana Get?

Trailing lantana plants may grow up to 16 inches tall and five feet wide.

What Do You Do with Trailing Lantana Over Winter?

If you live in a frost-free area, trailing lantana will survive the winter on its own. Cover the plants with row cover or sheet to protect them from light frosts.

If you live in an area that receives harsh frosts, trailing lantana will die over the winter. Therefore, you will need to replant new plants each spring.

In some tropical areas, trailing lantana is considered invasive. It can choke out native plants and become difficult to remove.

Is Trailing Lantana a Perennial?

In frost-free areas, trailing lantana is a perennial. However, it is treated as an annual in areas that receive frost.

Trailing lantana can grow in part shade, but it will grow much better in full sun. It will struggle in full shade.

Is Trailing Lantana Poisonous to Humans?

Yes. Leaves, fruits, and stems are poisonous if consumed. The leaves may also cause a rash when touched. 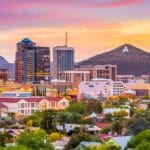 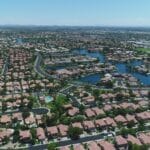