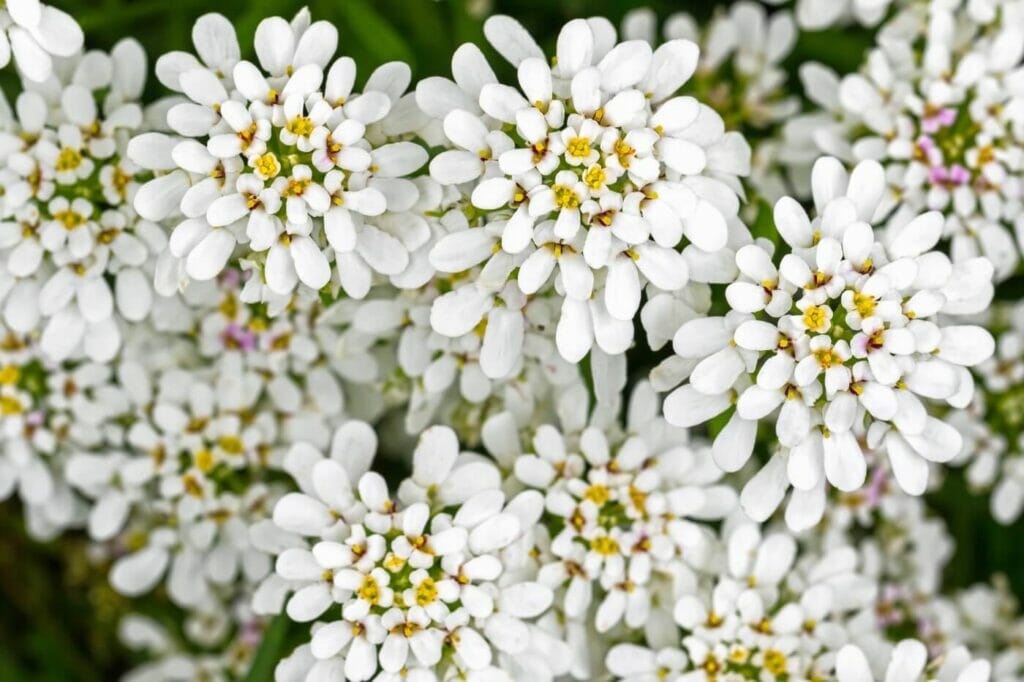 Welcome to our essential guide to growing and caring for Snowflake Candytuft. The Iberis sempervirens are aptly named and just as gracefully beautiful as the winter wonders themselves with its pure-white clusters of flowers. This versatile plant is easy to grow and perfect for a variety of garden settings. Here we’ll take you through everything you need to know to grow Snowflake Candytuft at home including planting, soil considerations, light preferences, feeding, pruning, and over-winter care.

How to Grow Snowflake Candytuft – The Essentials

Commonly called snowflake candytuft, perennial candytuft, or evergreen candytuft, Iberis sempervirens is one of about 30 species of herbaceous flowering plants in the Iberis genus that belongs to the Brassicaceae (mustard or cabbage) plant family.

The plant’s scientific name refers to both its native region (the Iberian Peninsula) and its evergreen nature, as the Latin words semper and virens translate to always green.

Iberis sempervirens is native to areas of the Iberian Peninsula, the British Isles, Italy, France, the Balkan Peninsula, and Europe.

Today, it can be round growing naturally in Syria, Northern Africa, and North America.

Snowflake candytuft plants are herbaceous shrubs with woody stems and a billowing mounding and somewhat spreading habit. The foliage is oblong and lance-shaped with a sometimes leathery texture.

The plants produce abundant snowy-white corymbs of flat flower clusters that emit a pleasantly sweet fragrance that is somewhat similar to hyacinth flowers.

Additionally, snowflake candytuft’s sweet fragrance attracts a variety of pollinators including butterflies, moths, and bees. So, its addition to your garden will help improve the health of all your plants and your local pollinator population.

Iberis sempervirens grows at a moderate to slow rate, requiring about 5 to 10 years to reach its mature size. Fully grown, snowflake candytuft reaches about 12 to 18 inches in height and a similar spread.

Suitable companion plants for snowflake candytuft include any other plants that prefer full sun and moist but well-draining soil. Some favorites include:

Choose a location with well-draining soil that receives at least 6 hours of direct sunlight daily.

The Best Time of Year to Plant Snowflake Candytuft

Plant snowflake candytuft in the spring after the danger of the first frost has passed. This allows the plant plenty of time to become established in the ground before winter dormancy.

Although it can be grown from seed and is sometimes self-spreading, snowflake candytuft grows rather slowly. Planting established nursery plants will produce more effective results within the same season.

Before planting, select a suitable growing location with full sun and well-draining soil. Choose a spot that will highlight the beauty of your snowflake candytuft plants.

Next, gather up any supplies you might need including sand or perlite to increase soil drainage and/or plant containers.

Snowflake candytuft thrives in a neutral to alkaline, rocky or sandy soil that’s poor in nutrients and rich in chalk (calcium carbonate).

How to Plant Snowflake Candytuft

You can either start seeds indoors in small containers and transplant them in the spring or sow seeds directly in the soil after the danger of the last frost has passed.

Although mature plants can reach up to 18 inches, you can sow seeds about 6 inches apart to create a groundcover effect more quickly when growing from seed.

Snowflake candytuft thrives in direct, full sun. Plant in a location that receives at least 6 hours of full sun each day.

If temperatures exceed 95°F, snowflake candytufts will benefit from a location that receives some shade in the afternoon or evening.

Thrives in ambient temperatures ranging from 65°F to 70°F and prefers low to moderate humidity.

How to Care for Snowflake Candytuft (Iberis sempervirens)

When and How to Water Snowflake Candytuft

Soak thoroughly when the soil is almost completely dry and allow all excess water to drain. Provide about one inch of water per week. Water less frequently during cooler or wetter weather and more regularly in hot, dry weather.

The use of a moisture meter or soil probe can help you perfect the timing of your snowflake candytuft watering schedule.

How, When, and Why to Fertilize Snowflake Candytuft

Snowflake candytuft can be fertilized once a year in spring with the application of a slow-release fertilizer that’s high in phosphorous and low in nitrogen.

Pruning and Cutting Back Snowflake Candytuft

During the growing season, pruning encourages fresh, new growth. Cut back 1/3 of your snowflake candytuft’s stem and foliage after the flower cluster is spent to maintain the plant’s shape and prevent legginess. If growing over a wall, in window baskets, or hanging containers, do not prune to encourage a lengthier spread.

These evergreen plants, otherwise, require no pruning or cutting back in the fall or spring.

Remove spent blooms to encourage new growth and blossoms throughout the flowering season.

Unlike the annual members of the Iberis genus, the perennial snowflake candytuft can be propagated both by seed, soft-wood cutting, and root division.

To propagate by seed, allow the seed pods to dry on the plant after flowers are spent. Once dried, remove them carefully and store them in a cool, dry place for the winter. Sow in spring after the danger of the first frost has passed.

To propagate by soft wood cutting, select a healthy, green stem to cut. Choosing a lengthier stem with at least a few leaves on it works best. Dip it in root growth hormone and stick it into a small pot of soil. Keep it warm and evenly moist until roots sprout.

To propagate by root division, remove plants from their containers or the ground in the fall after flowering has ceased. One large plant can be split into two or three plants as long as each clump has roots and foliage attached. Repot the divided plants or place them into separate holes in the ground.

Snowflake candytufts are winter hardy down to USDA hardiness zone 3 and can tolerate some brief dips down to temperatures ranging from -5°F to -10°F. However, in these cooler climates, snowflake candytuft tends only to be partially evergreen and might lose some of its foliage.

In cooler climates, protect snowflake candytuft growing in the ground with a 1 to 2-inch layer of mulch. Move potted plants to a warmer location indoors.

When and How to Repot Container-Grown Plants

Snowflake candytufts growing in containers can be repotted every couple of years or when they outgrow their containers.

To repot yours, select a well-draining container that is about 2 inches larger than the plant’s current pot. Follow the same potting process recommended for smaller plants.

Common Snowflake Candytuft (Iberis sempervirens) Problems and How to Treat Them

Signs and Symptoms of Problems

Here are all of the tools you should have around for Snowflake Candytuft care.

Bring the Beauty of Winter to Your Spring and Summer Garden

Snowflake candytuft is winter hardy in USDA hardiness zones 3 to 8.

How big do snowflake candytuft plants get?

Mature snowflake candytuft plants grow to be about 12 to 18 inches tall with a similar spread.

What do you do with snowflake candytuft over the winter?

Snowflake candytuft is winter hardy down to hardiness zone 3. In cooler climates, it can be mulched for added protection. Potted plants should be moved indoors.

Snowflake candytuft is not considered to be an invasive plant species.

Will snowflake candytuft grow in shade?

Although it can tolerate some shade, snowflake candytuft requires 6 or more hours of full sun daily. Plants that receive too little light will not produce as many flowers.

Is snowflake candytuft poisonous to humans?

Snowflake candytuft has no known toxicity to humans or animals. 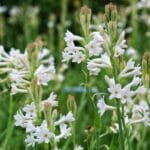 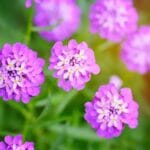