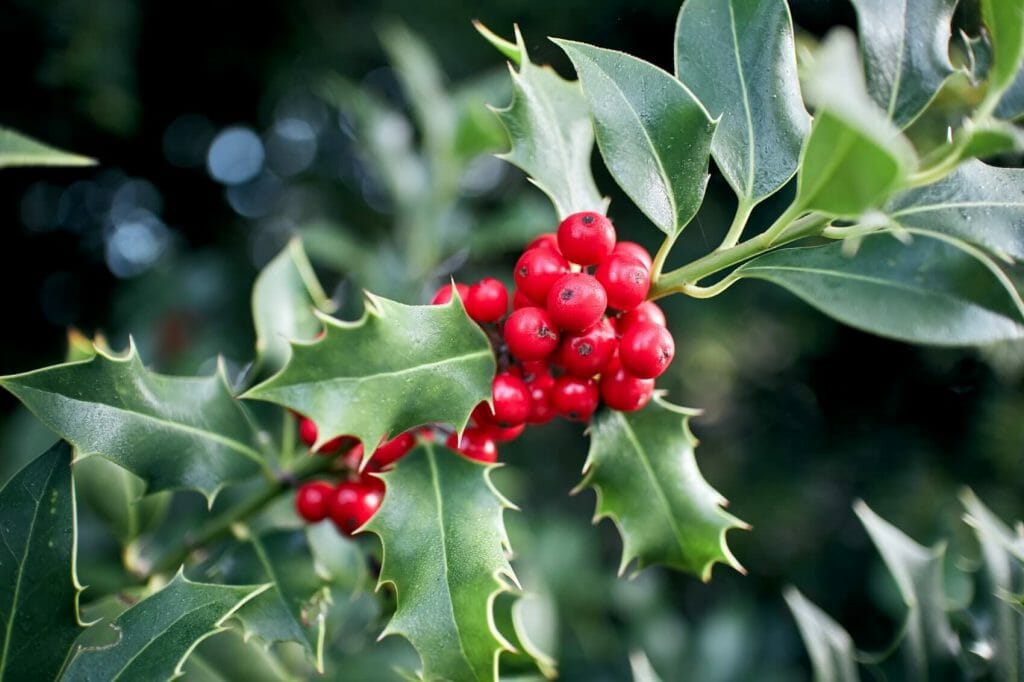 Everything You Need to Know About Holly Plants

With their glossy, serrated leaves and bright berries, holly (Ilex ssp.) stands out as an iconic ornamental plant. When grown as ground cover, shrubs, or trees, these evergreens add rich color and texture to the landscape. The plant’s fruits and foliage symbolize the winter season and Christmas holidays. Holly foliage and bark have culinary and medicinal properties; leaves can be used to brew tea, while some traditional medicines use holly berries as purgatives. Here we’ll take you through everything you need to know about the holly plant’s meaning, history, and symbolism, in addition to the most popular types of holly plants and their uses and benefits today.

Since Medieval times, holly plants symbolize the Christian holiday of Christmas. Known as “Christ’s thorn,” holly leaves and berries are used as a holiday decoration in Europe and America. Historically, holly flowers have also symbolized defense, thanks to their pointy leaves, and domestic happiness.

The holly or Ilex genus is part of the Aquifoliaceae family. Ilex contains three subgenera: Byronia, Prinos, and Ilex. Most plants belong to the Ilex subgenera, which contains more than 450 species.

Ilex grows in diverse shapes and forms, ranging from low-growing ground cover and lianas to woody shrubs and trees that reach more than 50 feet tall. Most are evergreen, but a few are deciduous.

Most holly plants have toothed or spiny alternate leaves. Foliage may be glossy green, or variegated green and white. Holly flowers are pleasantly scented and actinomorphic (of equal size and shape, on either side of a central axis). Most species are dioecious, so fruit production requires a male and female plant to cross-pollinate. Holly berries may be red, pink, white, black, or yellow.

Though beautiful to look at, holly berries are toxic to humans, dogs, cats, and horses. Ingesting holly berries may cause dehydration, drowsiness, diarrhea, and vomiting. If ingested in large amounts by small children, berries may be fatal.

More than 450 species of Ilex grow in temperate to tropical regions around the globe. Common holly species grown as ornamentals include:

The name Ilex comes from the Latin for “holly oak.” Some believe the similar foliage of the holly oak tree (Quercus ilex) resulted in the use of similar terms between the two plant types.

What Regions are Holly Plants Native To?

Hollies are indigenous to many temperate, subtropical, and tropical regions around the world. For example, I. opaca is indigenous to the southern and eastern U.S. and I. aquifolium grows across Europe, western Asia and North Africa.

I. cornuta is indigenous to China and Korea. The Dahoon holly (I. cassine) grows across the Caribbean, Mexico and eastern North America.

Other tropical and subtropical species include the Hawaiian holly (I. anomala), also known as Kāwa’u or ‘Aieu. The yerba mate holly (I. paraguariensis) is native to Uruguay, Paraguay, Brazil and Argentina.

When are Holly Plants in Season?

Most holly plants are evergreen, with attractive foliage year-round. In temperate climates, hollies tend to bloom in spring to early summer. Often, flowers are inconspicuous and may be greenish, white, or pink, depending on the type of holly. Blooms usually have a pleasant fragrance.

Berries may appear from fall to spring. Many holly species and cultivars are prized for long-lasting berries that add color to the winter landscape.

Uses and Benefits of Holly Plant

Holly Plant in Herbalism and Medicine

The foliage, bark, and berries of I. opaca have long been used in herbalism. Leaves can be brewed into a tea and used to treat colds, flu, pneumonia and measles. Topically, a holly leaf tea can be used to alleviate itching, rashes, and sores.

Tea made from holly bark has been used to treat epilepsy and malaria. Native Americans used tea to relieve coughing, and it’s said to have been a favorite remedy of George Washington.

Holly berries are toxic, especially when consumed in large quantities. In small doses, they’ve been used for their emetic, diuretic, and laxative effects.

In regions of South America, yerba mate foliage (I. paraguariensis) is used to make a popular tea. Yerba mate is traditionally served in a gourd and sipped through a straw that filters out bits of leaves. The tea contains both caffeine and the alkaloid theobromine.

Holly berries are toxic to humans and pets and can be fatal in large doses. Berries aren’t toxic for birds, though, and provide a source of food in winter.

Holly flowers attract pollinators with their sweet fragrance. In spring, bees, butterflies, and birds such as swallowtails flock to sample holly nectar.

Holly plants may bloom with white, greenish, pink, or yellow flowers, depending on plant type. In the language of flowers, holly blossoms may indicate foresight. Historically, holly flowers have also symbolized defense, thanks to their pointy leaves, and domestic happiness.

The Meaning, Symbolism, and Cultural Significance of Holly Plants

In the Christian religious traditions of Europe and North America, the holly plant is often used to represent and decorate for Christmas. This symbolism began long before Christianity, though.

The ancient Romans offered holly to the deity Saturn during the festival of Saturnalia. Many artistic depictions of Saturn include his sacred plant, holly.

For the Druids of the Celtic religion, holly plants played a symbolic role in marking the winter solstice. Holly’s green, white and red colors represented protection and luck and were hung over doorways of homes.

Over time, Christians adopted this tradition, with a few changes. Holly was still hung on doors to offer protection, but the pointed leaves were said to represent the crown of thorns placed on Christ’s head at the crucifixion. The plant’s red berries represented drops of blood.

In the English Midlands, superstition says that holly shouldn’t be brought into the house before Christmas Eve. In Scandinavia, holly is called “Christ thorn.”

Holly boughs are often gifted in the winter, especially around Christmas. Their glossy leaves and bright red berries make a perfect addition to bouquets and arrangements for floral gifting, and in centerpieces for holiday gatherings at work or home.

Holly is also a common decorative element in the home around Christmastime. Wreaths and swags make for festive home decor in the winter and for the holidays.

How to Care for Holly Plants at Home

Like most foliage, holly will dry out once cut. Preserve holly’s fresh appearance by snipping branches on the diagonal, gently crushing the ends, and placing branches in water. You may want to spray with an anti-desiccant, too.

Hang wreaths and swags in cool —but not freezing — spots. If holly is displayed indoors, misting with water daily can help keep foliage and berries fresh.

Holly’s glossy sheen, spiny foliage, and bright berries make this evergreen a popular floral choice in winter. Around Christmastime, holly is the perfect choice to decorate a home and bring a festive atmosphere to any holiday gathering. When grown outside, holly brings year-round color and texture to the landscape, as well as serving as a food source for birds.

Where does Holly grow best?

Holly grows best in slightly acidic soil bases that retain some moisture but offer good drainage as well. Aim for a location that receives moderate sun exposure throughout the day for your holly to truly thrive.

Can you eat holly berries?

Though beautiful to look at, holly berries are considered toxic to humans, dogs, cats, and horses. Ingesting holly berries may cause dehydration, drowsiness, diarrhea, and vomiting and can be particularly dangerous for young children.

What is Holly Good For?

Holly foliage, bark, and berries of I. opaca have long been used in herbalism. Leaves can be brewed into a tea and used to treat colds, flu, pneumonia, and measles. Topically, a holly leaf tea can be used to alleviate itching, rashes, and sores.

How long do holly bushes live?

Holly bushes grown in suitable climates can live for well over 75 years.

What does Holly symbolize?

Since Medieval times, holly plants symbolize the Christian holiday of Christmas. Known as “Christ’s thorn,” holly leaves and berries are used as a holiday decoration in Europe and America. Historically, holly flowers have also symbolized defense, thanks to their pointy leaves, and domestic happiness.

I’ve long been fascinated with the world of flowers, plants, and floral design. I come from a family of horticulturists and growers and spent much of my childhood in amongst the fields of flowering blooms and greenhouses filled with tropical plants, cacti, and succulents from all over the world. Today, my passion has led me to further explore the world of horticulture, botany, and floristry and I'm always excited to meet and collaborate with fellow enthusiasts and professionals from across the globe. 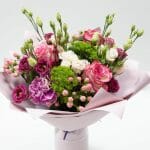 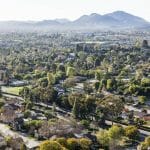 The 100 Most Popular Types of Pink Flowers