Daisies have bright, sunny faces and symbolism associated with cheerfulness, warmth, and joy. Along with tulips and daffodils, these flowers are ambassadors for springtime and all the themes connected to the season of rebirth and renewal. In this article, we’ll discuss everything you need to know about daisy flower meaning and rich symbolism, with information on the daisy’s history and origins, as well as their cultural significance around the world today.

In the language of flowers, daisies symbolize new beginnings and rebirth, in addition to love, cheerfulness, beauty, purity, innocence, hope, fun, and affection. They’re also commonly given to new mothers as a symbol of childbirth and motherhood. In spirituality, daisies represent faith and eternal life.

The daisy family Asteraceae contains more than 32,000 species of plants in 1,900 genera. Members of the family are commonly called daisies, asters, or sunflowers.

Plants in the daisy family are most recognizable due to the notable shape of their inflorescence and flower heads which feature star, disc, or ray-shaped arrangements of petals and bracts.

With thousands of different types of daisies, the flower family offers plenty of variety. Some of the most popular daisies include:

The family name Asteraceae comes from the Latin word aster, which means star.

The common name daisy comes from the Old English daeges eage, which means day’s eye. This refers to the daisy’s tendency to open in the morning and close at night.

Daisies have native habitats spread across the globe. They grow naturally in climates that range from tropical to subpolar and can be found on every continent except Antarctica.

When Are Daisies in Season?

Herbalists have used many daisy flowers for their medicinal properties, such as chamomile, echinacea, calendula, yarrow, and gumweed. Calendula is also a common ingredient in moisturizing skincare products.

The daisy family also features some important crops like lettuce, sunflowers, and artichokes.

Several species of daisies produce a high amount of nectar, making them attractive to pollinators. You can expect the garden favorites, bees, and butterflies, as well as a host of other pollinators in your daisy patch.

Daisies are perhaps most popularly used for their ornamental value. They’re one of the most popular cut flowers to include in floral arrangements and are also commonly planted in home gardens.

Are Daisies Toxic to Humans or Pets?

Daisy toxicity depends on the species in question. Some flowers from the daisy family are toxic to humans and pets, while others are not.

When planting daisies in your garden or displaying them in a bouquet in your house, you should research the toxicity of the specific species in question or simply keep them away from pets and small children to be safe.

Broadly, daisies represent rebirth, new beginnings, and hope. Their symbolic meanings, however, shift depending on the type of daisy and its color.

These common daisy colors have the following symbolic meanings:

Yellow daisies are strongly associated with cheerfulness, friendship, joy, and wishing someone well or “get well”.

Although not a common color, blue daisies symbolize long-lasting trust, honesty, and loyalty.

The color purple is connected to feminine beauty, pride, elegance, and royalty or regalness.

According to a Roman myth, the nymph Belides is responsible for the creation of daisies. In the story, Belides transforms herself into a daisy to escape the unwanted affections of Vertumnus, the god of gardens and seasons.

This story is where the common English daisy gets its scientific name, Bellis. The myth is also why daisies sometimes represent chastity and purity while also being associated with transformation or rebirth.

One of the earliest associations of daisies with childbirth comes from the ancient Celtic people. Although it’s darker than the symbolism of motherhood and childbirth attributed to daisies today, the ancient Celts believed that when a child or infant died – especially in childbirth – the gods would cover their graves with daisies in an attempt to console those who were grieving the loss.

Another early association of daisies with childbirth comes from Norse mythology. The daisy flower is associated with the goddess Freya who is a goddess of fertility, love, and beauty.

Daisies in the Victorian Era

The Victorian Flower Language, or floriography, was a popular form of communication during the Victorian era. It assigned specific meanings to specific flowers, and people used them to communicate with one another through their assigned meanings.

During this time, the daisy officially symbolized loyal love, innocence, and the ability to keep a secret. One could literally translate a daisy’s presence in a bouquet to the phrase, “I’ll never tell.”

Daisies in Religion and Spirituality

In spirituality, daisies represent faith and eternal life. As a symbol of rebirth, they’re also associated with reincarnation. They symbolize the ability to be forgiven for past mistakes and begin again, renewed.

Daisies in Art and Literature

Daisies blossom everywhere in art and literature. Their cheerful faces pop up in paintings from artists around the world. Literary greats, such as F. Scott Fitzgerald, Henry James, and Johann Wolfgang von Goethe, have given the flower’s name to their heroines too.

There are several appropriate occasions for giving daisies as a gift. They’re the birth flower of April, making them a perfect gift for celebrating an April birthday. Gerbera daisies are the official flower for the fifth anniversary.

With their symbolic meaning of hope, rebirth, and renewal, they’re also an excellent flower for Easter bouquets, springtime celebrations, and get-well flower arrangements. Bring a bouquet of daisies as a host or hostess gift to any springtime gathering.

Daisies are also traditionally gifted to new mothers as they symbolize childbirth and motherhood. This makes them appropriate for congratulating new mothers and also as a gift for celebrating the maternal figures in your life on Mother’s Day.

What does a daisy flower symbolize?

Daisy flowers symbolize new beginnings and rebirth, in addition to love, cheerfulness, beauty, purity, innocence, hope, fun, and affection. They’re also given to new mothers as a symbol of childbirth and motherhood.

What do daisies symbolize spiritually?

In spirituality, daisies represent faith and eternal life. As a symbol of rebirth, they’re also associated with reincarnation. They symbolize the ability to be forgiven for past mistakes and begin again, renewed.

Daisy flowers have several meanings associated with hope and happiness, making them a flower of good luck, too.

Do daisies come back every year?

Some species of daisies are annuals that grow only one season, and others are biennials and perennials that come back either for a few years or every year.

How long do daisy flowers last?

In a garden, daisies stay in bloom for four to six weeks. Cut daisies can last for five to seven days in a vase with fresh water.

Do daisies flower more than once?

Typically, daisies bloom only one time during a season. Dead-heading spent blossoms can encourage a second flowering, but these flowers usually aren’t too impressive.

It’s not surprising that daisies are one of the world’s favorite flowers. The common daisy is rich in meaning and symbolism, with ancestral links dating back through the centuries. There’s nothing quite like the renewed spirit of hope that early-blooming daisies can bring to a garden in spring or to a flower bouquet in the dead of winter. 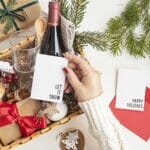 25 Best Gift Baskets in Chicago (for Every Occasion) 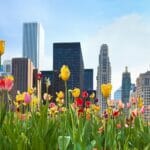 Yellow Rose Meaning in the Language of Flowers

Orange Rose Meaning in the Language of Flowers

White Rose Meaning in the Language of Flowers