Coneflowers are one of the best ways to add long-lasting color and structure to your backyard. These wildflowers have a long blooming season, creating a border of tall pink, purple, yellow, orange, red, or white flowers. Coneflowers are also pretty hardy, which helps keep them at their best for long periods. This article will explore when coneflowers are in season and how you can prolong the flowering period. 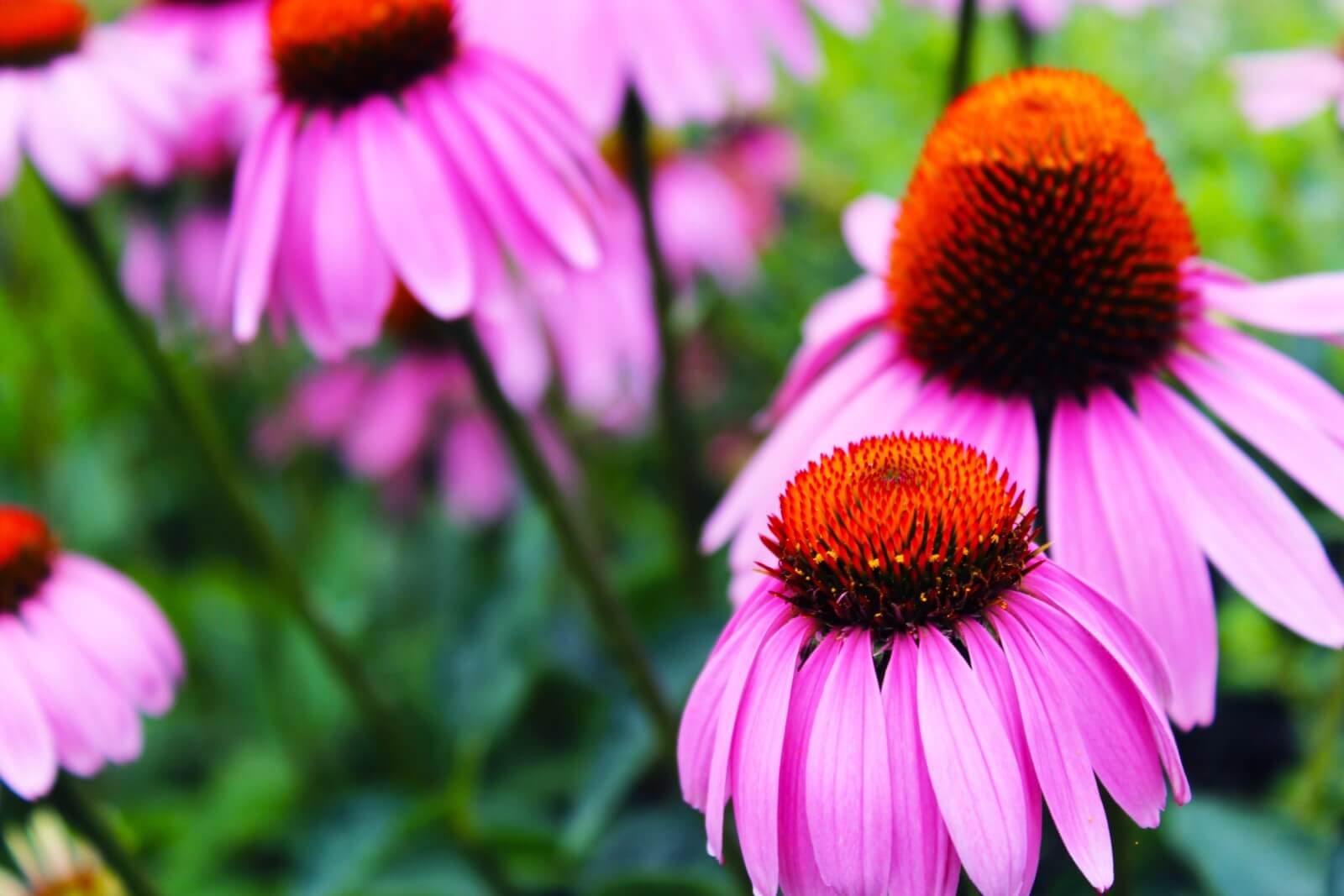 When are Coneflowers in Season? – The Essentials

Coneflowers are prized for their long flowering season. Echinacea flowers start to bloom in mid to late July and can continue deep into early October. Regional variations may cause coneflowers to bloom slightly earlier or slightly later. Coneflower foliage starts dying back in October or November.

Coneflowers are herbaceous perennial plants that belong to the daisy or sunflower family (Asteraceae). Coneflowers are members of the Echinacea genus and are divided into ten individual species. Echinacea purpurea, the purple coneflower, is the most common species.

Coneflowers are endemic to central and eastern North America and can be found in habitats such as prairies and open woodland. Across the United States, coneflowers can be cultivated in USDA Growing Zones 3 to 9. These tall perennials are among the most well-known wildflowers in the United States. They’re prized for their ornamental value and also look beautiful as a cut flower for a vase or bouquet arrangement.

The genus Echinacea is named after the Greek word ‘ekhinos‘, which means ‘sea urchin.’ The name refers to the spiky central flower cones, which are usually reddish-brown to orange. These cones contain clusters of tiny flowers surrounded by daisy-like florets with purple, pink, white, or yellow petals.

Coneflowers can reach up to 4 feet tall, depending on the cultivar. Each stem bears a single flower head that is extremely rich in nectar. Coneflowers are brilliant flowers for borders if you want to attract bees, butterflies, and other pollinating insects.

Coneflowers provide a range of benefits for gardeners and are prominent medicinal plants in traditional Native American medicine. Parts of Echinacea plants have been used to treat bites, burns, colds, and even toothache. Due to their history as medicinal plants, coneflowers represent healing and health.

When are Coneflowers in Season?

Like many other wildflowers, coneflowers begin blooming in summer. The first blooms usually emerge in mid to late July and continue right through until early October in some areas. Each flower head can keep flowering for a few weeks before wilting and being replaced by fresh blooms.

Once the final flowers finish in the season’s latter stages, the oval-shaped or lance-shaped leaves continue until the first frosts. The deciduous foliage then begins to die back in October and November in preparation for winter, which is the best time to consider cutting the plants back if needed.

How Long Does the Coneflower Season Last?

Coneflowers have an unusually long flowering season for a perennial plant. Echinacea plants can produce flowers for six to eight weeks, from late July until early October. Each individual flower head may keep blooming for a few weeks.

Deadheading spent coneflowers helps to prolong the blooming season of each coneflower plant. In many cases, new flower buds will already form from side shoots when the current flower is still wilting. Snipping off wilted flowers helps the plant redirect energy to produce new blooms.

Like many wildflower species, coneflowers are highly productive even in loose, nutrient-poor soils. Coneflowers are also drought-tolerant, so the flowers can survive to create a beautiful display even under challenging conditions.

Factors That Influence the Coneflower Season

Although there are ten species of wild Echinacea, a vast range of cultivars have also been produced by breeders and horticulturalists. Most of these cultivars are derived from Echinacea purpurea, the purple coneflower. While most cultivated varieties bloom from June until August, some may start flowering earlier or later.

Some cultivars like Echinacea ‘Daydream’ start flowering from May and continue until August or September. Other cultivars have shortened flowering seasons, such as Echinacea ‘Hot Papaya’ or Echinacea ‘Green Envy.’ These cultivars are in bloom for a short period, from early to mid-summer.

The ten wild species of coneflowers also have varying flowering times. Some are in flower for more extended periods than others:

Coneflowers grow and flower best in USDA Zones 3 to 9. Ideally, these flowers need six to eight hours of sunlight daily to generate the best and biggest blooms. Coneflowers that grow in open areas with plenty of sunlight will usually flower the longest.

If coneflowers are left to grow in too much shade, they may only produce small flowers for shorter periods. Equally, if coneflowers grow in a spot with far too much direct, intense sunlight, the flowers will also be negatively affected. Coneflowers are drought-tolerant in many areas and use deep taproots to siphon water from underground sources.

Coneflowers may struggle with colder climates. Many coneflower species can take up to two years to flower in colder or less-than-ideal conditions. In colder regions, protect young coneflowers from the cold during their first year if you want them to bloom successfully.

A few coneflower cultivars grow better in slightly cooler areas. Echinacea purpurea ‘PowWow Wild Berry’ is one such example that flowers from June to August. The spectacular Echinacea purpurea ‘Doubledecker’ is another cultivar that grows well in a colder environment. It begins flowering in late spring and finishes in late summer.

Coneflowers can either be bought and planted as established plants from a garden center or grown directly from seed. Planting or sowing late can impact flower growth early on. Start seeds indoors in late winter or early spring, or directly sow into the soil outside from mid to late summer.

If you’re planting coneflowers as nursery plants or from your own established seedlings, get them in the ground between spring and early fall. This gives the plant time to create a sound root system to survive the winter and flower in the following season.

If seeds are sown late, they will take much longer to flower. The same is true for young seedlings or nursery plants that are planted during late fall or winter. To produce the best flowers, coneflowers need roots that are well-established.

To produce the best possible blooms, coneflowers should be cared for correctly. While these perennials may be low-maintenance and easy to grow, there are some tips to keep in mind. The main things to consider are light, water, soil, and fertilizer. You’ll also need to watch out for common coneflower pests and diseases.

Coneflowers are also relatively easy to transplant and divide if you’re looking to expand your collection or relocate to a more suitable location.

Coneflowers need six to eight hours of full sun every day. However, it’s far better to expose them to the morning sun because it isn’t as intense as the afternoon sun. Even sun-loving plants like coneflowers can burn or wilt if they’re exposed to too much direct afternoon sun.

While coneflowers plants are in their first year, they should be watered regularly – about once per week. Once the plant has become fully established in its second year, you won’t need to water it often. Established coneflowers will need very little watering in most climates while still producing a bounty of fabulous blooms.

Coneflowers thrive on the loose, nutrient-deficient soils of prairies and other wildflower habitats. If you plant them in soil that has too many nutrients, the plant may become overwhelmed. The same is true of overfertilizing. Typically, coneflowers only need a fresh, top layer of compost every year to provide enough nutrition.

How to Extend the Coneflower Season

Although coneflowers benefit from a hands-off approach to care, you can give them a helping hand during the flowering season. Coneflowers are incredibly productive when it comes to producing blooms. Even so, the flowers last a few weeks before starting to wilt.

In most cases, coneflowers will already produce new buds while the older flowers are starting to wilt. However, you can help the plant produce even more flowers by deadheading any blooms that have started wilting. This helps the coneflower concentrate its energy on the newly emerging buds.

Coneflowers can be enjoyed for a surprisingly long flowering season, making them an attractive prospect for many gardeners. Most coneflowers are in bloom from July until September, although flowers lasting until October isn’t unheard of. Some varieties and cultivars may bloom slightly earlier or have a shorter flowering season. 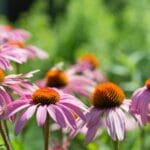 How Much Sunlight Do Coneflowers Need? 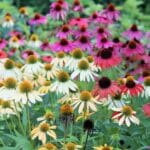 What Colors do Coneflowers Come In? (Essential Guide)