Everything You Need to Know About Chamomile Flower Meaning, Symbolism, and Cultural Significance

Chamomile is one of the most commonly known herbal remedies around the world. Yet many people do not realize it is not just an herb, but actually, a cheerful-looking flower that is similar to a miniature daisy. It is widely used in bouquets, both for its sunny appearance and its unique fragrance. Here we’ll take you through everything you need to know about Chamomile flower meaning and symbolism, their history and origins, uses and benefits, and cultural significance around the world today.

Chamomile flowers carry the symbolic meaning of rest, peace, poise, calmness. The flower is also a sign of renewal and rebirth in many cultures due to its ability to bloom for long periods and resist wear from foot traffic.

If you’ll only encounter Chamomile as a tea, you might be surprised to learn it has a much richer history.

German Chamomile’s scientific name is Matricaria recutita, while Roman Chamomile is better known as Chamaemelum nobile. It is part of the big Asteraceae family, which includes many different types of daisy flowers. Matricaria and Chamaemelum are two related but separated genera.

All Chamomiles varieties are relatively low-growing annual herbs that spread along the ground. They feature daisy-like flowers with large centers and multiple petals.

While the colors of the cultivated varieties of Chamomile vary, most are white or yellow. Most varieties have a distinct fragrance that can smell like sweet hay, fresh apples, or animal-like musk.

Chamomile has millennia of recorded use in the Mediterranean and Egypt, and the non-native varieties commonly used for medicinal purposes reached Europe in the early Medieval era. It was well-recorded by the 12th and 13th centuries as part of the European herbal medicine tradition.

Most of the improved varieties of Chamomile have been bred for drought resistance or higher essential oil content rather than their visual traits. ‘Bodegold’, ‘Syrian’, and ‘Bona’ are some of the most popular commercial varieties grown for cut flowers or herbal remedy production.

The name Chamomile is a French variation of the Greek words for “earth/close to the ground” and “apple”. This name was derived from the appearance of the large round centers of the flowers, which are somewhat apple-like, and the flower’s sweet scent.

What regions are Chamomile Flowers native to?

When are Chamomile Flowers in Season?

As an annual herb, chamomile tends to start blooming in late spring to early summer. However, it is unique in that it tends to bloom continuously through the summer and fall until frost stops it. It may stop blooming for short periods of hot weather. This is one of the features that makes it so popular as a grass alternative for lawns.

Chamomile takes about 10 weeks to start flowering from when it sprouts, so it’s easy to determine when it’ll start blooming based on your local spring temperatures. It begins sprouting when the soil is at least 55 degrees F, so it takes most of the spring to grow before blooming in most areas of North America and Europe.

Uses and Benefits of Chamomile Flowers

Chamomile’s most popular use is as a herbal remedy. It’s widely consumed as a tea, primarily the German Chamomile variety with a milder and sweeter taste.

The essential oil extracted from it is also used, especially as a scalp treatment. However, high doses of it can be harmful to your health, especially if you are pregnant.

The flowers themselves are safe for pets and children, so they make a good lawn replacement. Bees and other pollinators also appreciate Chamomiles lawns.

The humble Chamomile does more than just make a good cup of tea. It’s also full of symbolism that has been used by artists throughout the centuries.

Most Chamomile varieties feature white petaled flowers, but the yellow color of the center also contributes to its symbolism. Some varieties also feature yellow petals to match. White is the color of innocence, purity, and rebirth.

It’s commonly used to symbolize a fresh start or moving forward from a period of grief. Yellow means happiness, warmth, and joy. As the color of the sun, it helps link Chamomile symbolically to the rising of the sun each morning.

The Cultural Significance of Chamomile Flowers

The Egyptians were among the first to cultivate the plant and use it as a herbal remedy. They believed it cured a serious condition that is now understood to be a form of malaria. However, Chamomile isn’t actually an effective treatment for it.

The flower nonetheless developed a strong meaning of healing, good health, and the power of the sun in particular. Residues of Chamomile flowers have been recovered from the tombs of many important officials from varying eras of Egypt’s history.

In its native range in western Europe, the German variety of Chamomile developed the meaning that it is most commonly associated with today.

Europeans using the herb as a cure-all for many different diseases realized its primary effect was for relaxation and calming. Today it is most commonly used still as a sleep-inducing tea at bedtime.

Beyond just use as a herbal remedy, many people see Chamomile as a symbol of calmness, peace, and even healing.

In 1998 Russia declared that Chamomile, specifically the Roman variety, was the country’s native flower. The flower plays an important role in Russia’s folklore and cultural history, most important as a mythical heal-all herb. It’s considered a symbol of the power of the sun.

It’s also used in Russia as a form of love-related fortune-telling. The practice of plucking petals while saying “He/she loves me, he/she loves me not” arose from this tradition.

The flower is still widely grown in the small gardens known as dacha as a sign of the resilience of the Russian people.

A Symbol of Renewal in Shakespeare

Unlike most other flowering plants, Chamomile is actually tough enough to resist being stepped on regularly. This is why it has been used for lawns, meadows, and pathways since the early Medieval era.

Even in Shakespeare’s time, Chamomile was well known for being able to withstand foot traffic. That’s why he used it as a symbol of resilience and renewal in Act 2 of Henry IV. Its ability to regrow continuously is contrasted against youth, which fades with time and wear and does not return.

Dried Chamomile flowers are a common gift when someone is stressed or is having trouble sleeping. But aside from a gift of tea, fresh Chamomile blooms are great for sending a message of support and calming to someone going through a hard time. Even something positive but challenging, like a new career or new baby, is a great occasion to mark with a Chamomile bouquet.

It might be available in every grocery store in dried form, but Chamomile deserves to be appreciated as more than a calming tea. The fresh flowers are full of beauty and fragrance. They are among some of the most delicate and attractive daisy-like flowers for a bouquet. Even dried on the stem, they can add both fragrance and beauty to any arrangement.

Is chamomile a daisy?

Chamomile is technically a type of daisy since they are part of the larger Asteraceae family. Most of the flowers in that family are considered daisies.

What is the chamomile flower used for?

Chamomile is most commonly used as a herbal tea for encouraging calmness and restful sleep. However, it’s also a symbol of peace and renewal as well.

Does chamomile grow back every year?

Both German and Roman Chamomile are annuals, which means they don’t regrow from the roots. However, they tend to reseed themselves and return anyway as long as they bloomed for long enough over the summer.

Chamomile does tend to spread over time, but not rapidly. It’s easy enough to keep contained and may need re-seeding to prevent patches from forming in larger meadows and lawn plantings.

Can chamomile grow in pots?

Chamomile is a relatively small plant with shallow roots, so it can grow well in most pots and other containers. Just make sure the container drains well since this herb won’t stand for wet roots. 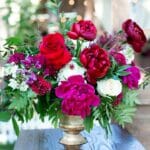 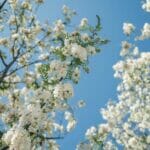