The hardy, beautiful azalea is a mainstay in gardens across the world. It thrives in temperate climes, but with nurturing can live on all continents. It is best-loved in the United States and Eastern Asia, though you’ll find it everywhere in between. The azalea comes in two main categories: deciduous and evergreen. Both produce beautiful blossoms in spring. These have earned it a starring place in festivals and other annual events. Here we’ll take you through everything you need to know about Azalea flower meaning and symbolism, their history and origins, uses and benefits, and cultural significance around the world today. 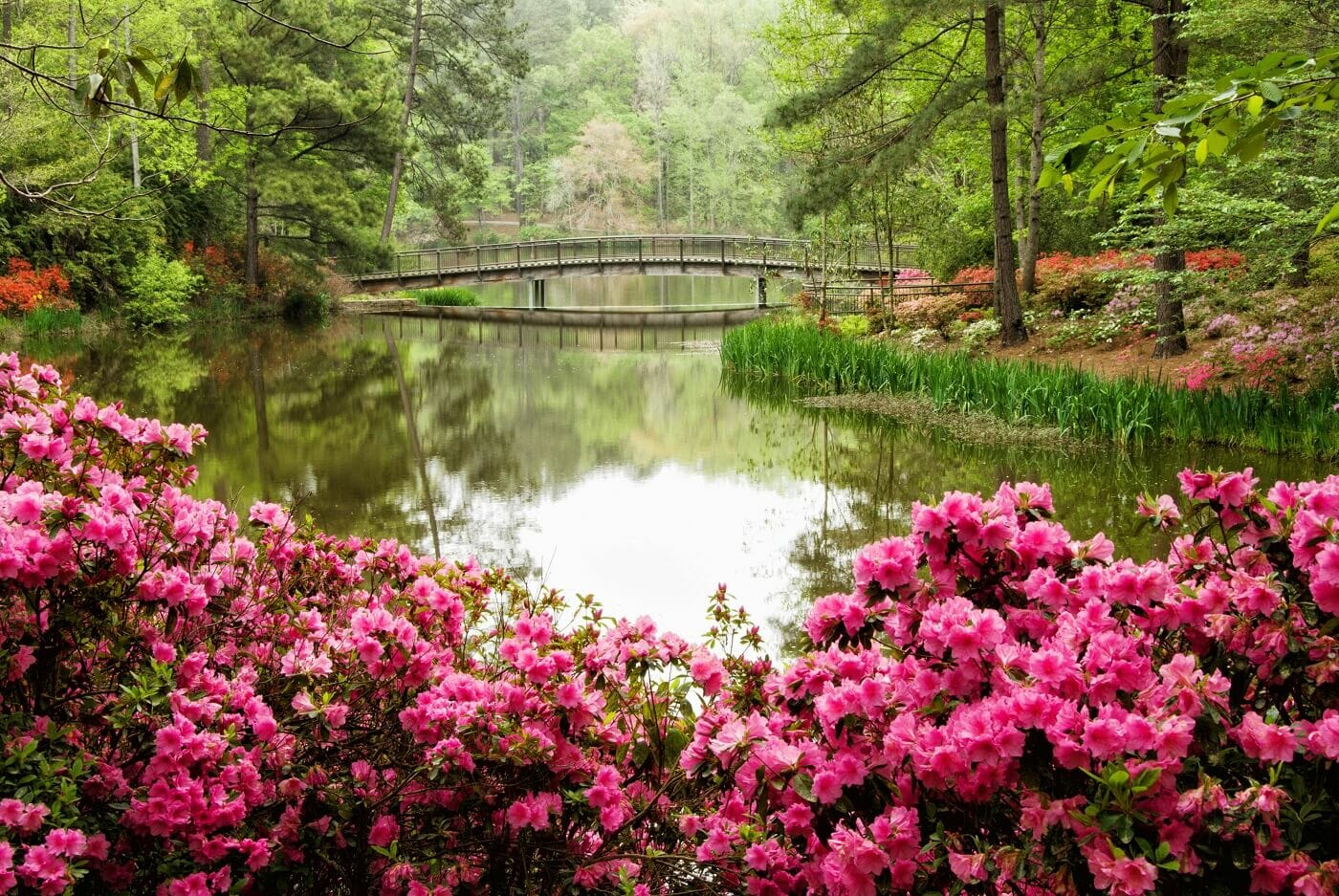 In the language of flowers, Azaleas carry the symbolic meaning of temperance and prudence. The azalea plays a larger role than most in modern-day culture. It’s famous for blooming at the Augusta National Golf Club for the annual Masters Tournament. It is also the subject of a huge number of festivals in Asia.

Azalea is a long-living subspecies in the Rhododendron genus. With more than 10,000 cultivars available, you’ll never lack for choices!

It’s a bit confusing to tell azaleas from rhododendrons. For one thing, they’re in the same genus, Rhododendron. For another, they look very similar to rhodis.

Suffice it to say, azaleas are a flowering shrub in the family Ericaceae. Examples of species types include:

Difficulty telling the difference between azaleas and rhododendrons? You’re not alone. Here’s a handy guide to telling them apart.

The most basic difference is that azaleas have tube- or funnel-shaped flowers. That’s opposed to rhodis, which generally exhibit a bell shape.

Azaleas come in nearly all colors of the floral rainbow, from orange and yellow to white and pink to red and deep purple. Deciduous azalea flowers are said to smell better than those on evergreen bushes.

Azaleas have been cultivated in Eastern Asia for millennia. They’re said to have been found by a Chinese emperor and cultivated by Buddhist monks. Those species, as well as ones native to the United States, are popular in American and European gardens today.

Cultivars share the genus name Rhododendron and have different species names. There are far too many types of azaleas to name individually, varieties both from nature and from the nursery.

This searchable Azalea Society of America database tells you all you need to know about the vastness of options. And it contains no fewer than 700!

The name “azalea” comes from Greek, meaning “dry.” They don’t like overly wet soils, which may contribute to the name. The name, in turn, likely contributed to its floriographic meaning, “temperance,” discussed below.

To What Regions Are Azalea Flowers Native?

Azaleas are native to North America, Europe, and Eastern Asia. North American Azaleas are deciduous, found from Canada down through Mexico. The bulk of species is concentrated in what is now the United States.

In Asia, rhododendrons and azaleas are evergreen. If you see a garden variety that still has leaves in winter, that’s a good indication it is not a native.

When Are Azalea Flowers in Season?

Azaleas typically bloom in May and June. However, they sometimes flower earlier, if it is hot enough. In particularly cold years, the weather may push their blooming times back a bit.

Uses and Benefits of Azalea Flowers

Azaleas don’t play a huge role in traditional medicine or food, but they’re great in the garden.

Are azaleas good for pollinators? It depends. Native azaleas – those found naturally in North America – are great for native pollinators.

On the other hand, imported varieties probably won’t do the trick for American birds, butterflies, and bees. That’s especially true for cultivars, which are often so overbred they don’t provide tons of nutrition.

Azalea extract is recommended by some as a free radical fighter, circulatory catalyst, and heart tonic. However, there’s not enough good information on this. Definitely ask a doctor before taking azalea extract or any herbalist blend.

Azalea is toxic to dogs, cats, and livestock. They have to consume fairly large amounts to cause any harm. Look for drooling, vomiting, tremors, confusion and weakness, or other unusual signs.

Azalea has many meanings across the world. In China, it is used to symbolize womanhood and thoughtfulness. In Victorian floriography, it means temperance.

Given the wide range of color meanings, you can use azalea to send many messages, such as:

The Cultural Significance of Azalea Flowers

Azaleas have major significance across the world and in Asia, from which many of the most beautiful varieties hail. They are associated with beauty, temperance, and even death. Yikes.

Note that azalea should not be confused with rhododendron. Some people erroneously associate the two. The national flower of Nepal, for instance, is the latter, not the azalea.

In China, the azalea is a symbol of womanhood. It is also called the “thinking home bush,” or sixiang shu – sometimes also written xiang shu. In Chinese wisdom, the shrub earned its name due to its associations with thoughtfulness or pensiveness.

The Chinese poet Du Fu, writing in the Tang Dynasty, made azaleas famous. His poem “A Sea of Blood Red Azaleas,” is one example of his work. It was not the only one he wrote, however, in honor of these lovely blooms.

Floriography is the language of flowers. It was a highly developed art in Victorian times. Back then, it was considered immodest to express oneself openly, so instead, a system of sending messages through flowers was used.

According to this system, azaleas mean temperance and prudence. Such virtues were highly prized by the Victorians. They certainly relate to the older Chinese concept of thoughtfulness, so azalea’s meaning has remained consistent throughout the years.

Azaleas are quite toxic, after all. In fact, they’re so toxic that some bees are fed on azaleas so that their honey will produce “mad honey.” It is mind-altering, medicinal, and sometimes fatal.

Called deli bal in Turkey, traders have been selling it to Europe since the 1700s. At that time, it was mixed into drinks to provide a bigger buzz than booze alone. Hallucinations are possible, though more commonly, mad honey just gives you the spins.

This is due to its toxicity. Concentrated amounts of any part of azalea can kill. Therefore, sending blooms in a black vase told the recipient: You’re in for it.

Today, many organizations host azalea festivals. They honor the bright colors of the plants of that area and from around the world.

The Masters Tournament is famous for its azaleas, which bloom at the same time as the games every year. They bloom in such close conjunction that some people assume there’s a conspiracy afoot.

The Ice Theory, as it is known, holds that gardeners make the plants hold off on their blooms. They do this by placing bags of ice on the roots in warmer weather. However, it’s not true, as demonstrated by the years when the flowers come early and are spent by the time the tournament arrives.

Azaleas are suitable at any time, using the language of flowers or their color-based meanings. You can give potted azaleas or bouquets!

How to Care for Azalea Plants

Azalea plants are happy in pots for a while, but eventually, they want to go into the ground. Plant in sunny to part-shaded areas with well-drained, constantly moist soil.

Want more azaleas in your life? That’s not hard to do. If you live in a temperate climate and have moist, well-draining soil, your azaleas will be happy.

What is the spiritual meaning of azaleas?

In spirituality, the Azalea flower is linked to temperance and thoughtfulness.

What does the name Azalea mean?

The name Azalea directly translates to “Dry,” from the Greek word.

How long do azalea flowers last?

Typically, Azaleas bloom for a month or two on the bush. In a bouquet, they’ll usually last around a week.

Do azaleas flower more than once?

The Encore series of azaleas blooms again in the fall, but all others bloom in summer only.

How poisonous are azaleas?

Very. Don’t eat any part of the Azalea plant, nor buy any product labeled “mad honey.” If you get an azalea bouquet in a black vase, you might want to do like old times and call the police! 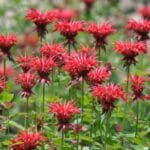 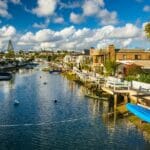