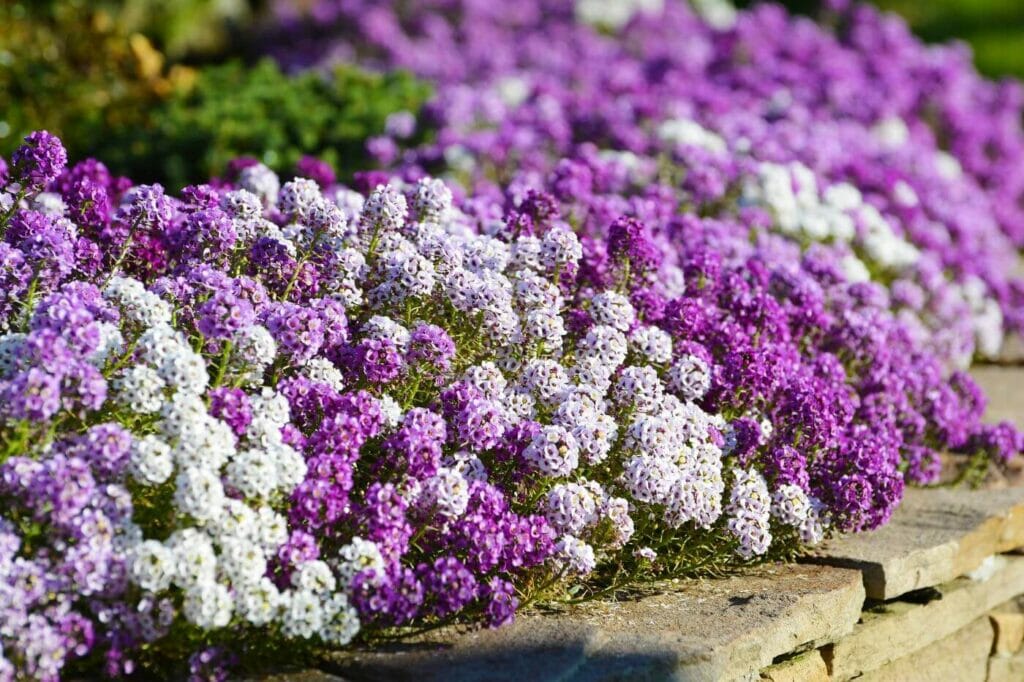 A constant companion of gardeners worldwide, alyssum is a cheerful specimen offering a huge variety of colors to the home botanist or florist. Here we’ll take you through everything you need to know about the rich history and origins of Alyssum flowers, plus learn about their meanings and symbolism, uses and benefits, and suitable gifting occasions today.

Alyssum means “worth beyond beauty” or “sweetness of soul” in the Victorian language of flowers. It is also a plant with a role to play in witchcraft. Dedicated practitioners claim alyssum will help deflect unfriendly spells. Alyssum can also help the wearer cultivate calmness and avoid anger.

Alyssum’s small, dense clusters of blossoms offer sweetness and innocence of which the Victorians would have approved. It is an old plant whose original medical purposes are now antiquated.

The Alyssum genus contains between 100 and 200 different species. It is in the Brassicaceae family, which also contains mustards and cruciferous vegetables.

The most common alyssum plant is Lobularia maritima. It is synonymous with Alyssum maritimum, though that Latin name is outdated.

Aurinia saxatilis is also called alyssum, but don’t confuse the two. Though similar in appearance, they’re quite different taxonomically. Similarly, while it looks like baby’s breath, L. Gypsophila paniculate, they are not related.

Alyssum is considered an annual shrub. It has branching stems with small green leaves. Its flowers come on in early summer in a huge range of colors. These include reds and pinks, oranges and yellows, whites and purples.

In USDA zones 10 and above, it will grow as a perennial. In any temperate region, it makes a great annual. If you leave blossoms on after they are spent, it will freely self-seed.

Alyssum smells lovely. Some people compare it to the smell of honey. The plant starts producing this smell even before it blooms, so get a whiff!

We know the ancients knew of alyssum because of its name.

Alyssum stems from the Latin “alysson,” which comes from the Greek “alusson.” In ancient Greek, “a” means “without” and “lussa” means “rabies.” This is a nod to the fact that the plant was used as a rabies treatment back in the day.

Today, the name is more generally translated as “without madness.” This explains some of its supposed uses in witchcraft. It also explains the sweetness it carries in the language of flowers.

Sweet alyssum boasts a generous number of cultivars in a range of colors. Names like “Carpet of Snow“, “Snowdrift,” “Violet Queen,” “Wonderland Copper” and “Rosie O’Day” give a sense of its range of hues. Look here for cultivars marked by the Royal Horticultural Society as especially noteworthy.

Alyssum’s modern genus name is Lobularia. It is Greek for “small pod.” While most people don’t notice, this is what the fruits look like before alyssum goes to seed.

The most common alyssum species in the garden, maritima, is named for its preference for sea air.

To What Regions are Alyssum Flowers Native?

Alyssum is a large genus, so it isn’t native to any one place. Its members can be found all over Europe, Asia, and Africa. However, it is especially prolific in species around the Mediterranean.

Lobularia maritima is native to the Canary Islands, Madeira, and Cape Verde. It is also found naturally in parts of France. Its easy-going temperament and self-seeding habit makes it very cosmopolitan today.

When Are Alyssum Flowers in Season?

Alyssum first blooms around June and continues to produce blossoms until the frost. However, depending on your climate, flowers may come on earlier or later.

Uses and Benefits of Alyssum Flowers

Alyssum is most commonly used as an ornamental plant. However, it does serve a minor role in the kitchen. Moreover, it makes a great addition to your natural pest toolkit.

Alyssum is a member of the same family as collards, chard, kale, and other greens. As such, it’s a great addition to salads and stir-fries. Try only to eat alyssum you’ve grown from seed to avoid nursery chemicals.

Alyssum has a range of historic medicinal uses. These include:

Today, we have better over-the-counter remedies for these. However, in its day, it was an important herbalist’s supply.

Alyssum is non-toxic to cats, dogs, livestock and people. Berteroa incana, or hoary alyssum, is toxic to horses, but is a completely different genus that happens to share the common name. Unless you are a farmer, you won’t need to worry about that!

Small butterflies, flies, bees, and other pollinators are drawn to alyssum’s sweet smell. They also flock to color. Choose brightly-hued alyssum varieties for your pollinator garden.

Alyssum is popular with hoverflies and ladybugs. These are natural aphid-eaters. If you’re having trouble with the nasty green invaders, plant alyssum near the problem and enjoy Earth-friendly results!

Alyssum is a very versatile plant. It not only carries multiple symbolic meanings, but it also comes in a huge range of colors.

Traditionally, the flower was referred to as “sweet alyssum,” which tells you all you need to know. Its meaning is sweetness and calm energies in the language of flowers.

The Cultural Significance of Alyssum Flowers

Alyssum’s reputation as a flower of gentility and restraint most likely stemmed first from the ancients. It then made its way to the Victorians and even into modern Wicca.

The Victorians did not invent the idea that flowers carried meanings. However, they did codify it for the first time in “floriography.” The “language of flowers” is a distinctly Victorian endeavor to place each blossom in the ranks, complete with meaning and symbolism.

The idea was that, if each flower had a meaning, people could use them to express themselves. They might not otherwise be able to, but this language would enable it. Obviously, it was frequently used between lovers.

Alyssum found its role in the floriography pantheon among the sweet. It took on the epithets “worth beyond beauty” and “sweetness of soul.” These dainty phrases worked perfectly for lovers, but also for children.

Witchery is never complete without plenty of plant lore. Alyssum finds itself in good company in home witchcraft.

Alyssum is sympathetic to the element of air. This is perfectly in tune with its light and breathy qualities. It is also associated with Mercury, which adherents of astrology know is associated with self-expression and relationships.

Its calmness also helps to deflect spells of ill intent. Wear alyssum to keep people from misleading you. You can also place it in a pocket to stay calm and cultivate serene energies.

Some people say sweet alyssum works well in fairy gardens and moon gardens. The latter is a botanical endeavor meant to highlight flowers and other plants that come alive under moonlight.

While alyssum is usually seen as a shy and retiring flower, it plays starring roles as well. When Khedive Ismail of Egypt wanted to impress notable visitors in the 1800s, he built a palatial garden and filled it with many flowers. Alyssum was among its ranks.

The charming and dainty epithets with which alyssum is wreathed make it appropriate for many occasions. These include:

“Sweetness of soul” and “worth beyond beauty” are both appropriate sentiments for condolence in the loss of a loved one. Alyssum in white is a good addition to a bouquet on these occasions.

How to Care for Fresh Cut Alyssum Flowers at Home

Alyssum is a very delicate flower. Therefore, you should not expect it to last as long as others do. You can extend its life by adding ¼ teaspoon of bleach to every quart of water in bouquets.

Overall, alyssum may be your best friend if you’re looking to cultivate a calmer existence. It’s also a great addition to bouquets for pretty much any occasion. Use floriography to choose the right color to express your sentiments!

Does alyssum grow back every year?

Alyssum reseed themselves as long as you leave their flower heads intact once they are spent.

Does alyssum bloom all summer?

Alyssum blooms from June through to the frost, and it will produce more flowers if you cut back spent flower heads.

Alyssum is true to its name and smells sweet. Some compare it to the scent of honey.

What does alyssum symbolize?

“Sweetness of spirit” and “worth beyond beauty,” according to the Victorians.

Is alyssum an annual or perennial? 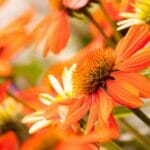 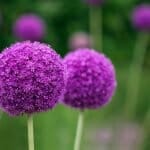