The Meaning, Symbolism, and Cultural Significance of Aloe Plants

Most people think of flowers as symbolic, but they tend to overlook non-flowering plants like Aloe vera and its relatives. Yet even the humble Aloe plant can have significant meaning and symbolism, whether used to decorate your home or given as a gift. Understanding the symbolic meaning of the Aloe plant is key before you give one away because you don’t want to send the wrong message. This guide will take you through everything you need to know about Aloe plant meaning, symbolism, and cultural significance around the world today.

The Symbolic Meaning of Aloe Plants – The Essentials

In most Ancient cultures, Aloe was a potent symbol of spiritual well-being and grace. It was such a holy symbol to the Mahometans of Egypt that they would hang the plant near the door of their home to signify their devotion to their gods. In later Roman culture, the plant’s sap was dried out and offered to the gods on burning coals as a form of incense.

There are hundreds of types of Aloe plants, but they all share common characteristics and have similar meanings.

Aloe is a genus that includes many related plants. Almost all plants in the Aloe genus are some type of succulent. Succulents are plants that store a lot of water in their leaves and therefore have plump and somewhat squishy foliage rather than flat leaves.

The Aloe vera is a popular example with a clear gel inside the leaves used for skin care, but its primary purpose for the plant is to keep a supply of water handy when conditions are dry.

Aloe plants are native to dry and arid areas. This means that they don’t do well with overwatering or in wet soils. They also thrive best in bright, indirect light conditions.

There are hundreds of specific types of Aloe, ranging from outdoor plants that can grow 10 feet tall to the smaller varieties commonly grown indoors.

In general, these plants don’t feature a visible stem and will have all of their thick, spike-shaped foliage rising from a central base.

Some varieties flower, but they generally can’t be made to flower indoors because the conditions are lacking to trigger this kind of development. Most flowering Aloe plants are only grown outdoors in warmer climates where they won’t freeze in the winter.

Ancient civilizations, including the Egyptians, Mayans, Japanese, and Greeks, all knew of Aloe and used it for its potential medicinal properties. That hasn’t changed much today.

These plants have been established worldwide for thousands of years, but it’s still been a bit of a mystery as to where Aloe originated from. The latest research tracking genetic data shows that Aloe vera, in particular, is likely to have come from the Arabian peninsula.

Other Aloe plants are native to South America, Africa, Asia, and the southern parts of North America.

Aloe comes from Old English, which helps indicate how well-known this plant was before the modern day. Its original name was Alwe, which means fragrant resin. This comes from the Greek word Aloē, which in turn was derived from Hebrew and Tamil.

Just from the etymology of the name alone, it’s clear that Aloe has been loved and cultivated in many different cultures. Some common names for this plant include the Burn plant, Elephant’s Gall, and Lily of the Desert.

The Meaning, Symbolism, and Cultural Significance of Aloe Plants

An Ancient Symbol of Beauty

In most Ancient cultures, Aloe was associated with beauty and physical perfection. Ancient queens like Nefertiti and Cleopatra were recorded as using its gel as part of their daily beauty regimen.

But beyond just physical beauty, it was also a potent symbol of spiritual well-being and grace. It was such a holy symbol to the Mahometans of Egypt that they would hang the plant near the door of their home to signify their devotion to their gods.

This was a common theme across the Mediterranean, where various types of Aloe were often grown near the home as a spiritual reminder of faith.

Across the Arabian peninsula and in ancient Greece, Aloe was connected with good health. On a more practical level, it was known for helping soldiers heal from battle.

It was prevalent in the ancient world for treating burns since many other treatments involved dung or other materials that could infect the wound.

Since Aloe sap was relatively pure when applied directly from a fresh leaf, it was much more likely to aid healing than other treatments of the time.

Fortune and Wealth in Africa

With many of the Aloe species native to Africa reaching considerable heights and producing eye-catching blooms, these plants took on a slightly different symbolic meaning across the continent.

It became associated with wealth and fortune instead due to its rapid upright growth. An island off the coast of Africa, Socotra, was even conquered by Alexander the Great so he could have a steady supply of Aloe to heal his injured troops.

Gift of the Gods

The Greeks not only thought of Aloe as a spiritual plant, they saw it as a gift from the gods themselves. Many of the common names for the plant in Ancient Greek indicated divine involvement in some way.

In later Roman culture, the plant’s sap was dried out and offered to the gods on burning coals as a form of incense. It was considered a potent offering that could help bring good luck, wealth, and good health to the entire family and your loved ones in the afterlife.

During Victorian times, the Aloe took on a slightly less positive meaning. In the Language of the Flowers, it could symbolize religious beliefs that bordered on superstition.

It was also a symbol of grief and was often sent to recent widows or children that had lost parents. With a mixed message, it had to be handled carefully to avoid creating the wrong tone.

Japanese floral arrangers also assigned the Aloe a less than positive meaning in the Hanakotoba, or Japanese Language of the Flowers. It indicates bitterness, perhaps due to the somewhat bitter taste of the Aloe vera gel. As in the Victorian era, it’s sometimes sent to indicate grief over the loss of someone.

There is a mention of a plant known as Aloewood in the Bible used during the embalming of Christ. Many people assume that it is one of the Aloe plants we are familiar with today, even though they don’t grow as trees that would produce a resin or wood.

Keep in mind that the term Aloe was initially used by ancient cultures to mean a fragrant or valuable plant resin. The Aloewood of the Bible is actually Aquilaria agallocha, a shrub-like tree known for its fragrant sap. It is not a true Aloe but rather is known as Eaglewood or Agarwood.

Aloe vera and other Aloe plants have a mixed reputation in practices like Feng Shui. Because they are live plants with green coloration, they can symbolize the growth of positive energy.

Plants are linked to the element of wood, which offers stability, strength, and steady growth. Live plants are often recommended for the home to stimulate certain parts of life, such as career or wealth. However, Aloe plants are not considered the best choice for this purpose.

In Feng Shui, rounded and curved shapes are preferred over sharp and pointed ones to generate positive energy. The pointy leaves and spikes of Aloe vera are often considered a problem in this kind of practice.

While it is possible to use an Aloe plant still indoors to stimulate energy and promote well-being, you’ll need to place it with extra care if following Feng Shui principles to help balance out its less-positive features.

For more, see our in-depth guide on where to position Aloe plants in the home for optimal growth and Feng Shui benefits.

Depending on the meaning you prefer for this plant, it’s best to gift an Aloe after someone has suffered a loss or is healing from an injury. You may even offer them a practical balm for their wound if it’s possible to use the plant’s gel for their treatment.

Potted Aloe plants are also commonly sent to celebrate getting a new job since it’s associated so strongly with wealth and success in some cultures.

Or, you may want to send one when a friend needs support with their beauty regimen and you want them to feel comfortable in their own skin just the way they are.

Aloe is generally gifted as a potted plant rather than as a cutting, but some unique arrangements may feature cut Aloe leaves for a modern look.

What do Aloe Plants symbolize?

Aloe symbolizes good fortune, health, and beauty in many ancient cultures. However, in Victorian times, it was a symbol of superstition or grief instead.

Many cultures worldwide, including some in Africa, Asia, and the Mediterranean, believe that the Aloe plant is a lucky symbol. It’s often gifted to graduates and job seekers to wish them wealth.

How long do Aloe Plants live for?

With care, most Aloe varieties can live for decades.

Most Aloe plants are not particularly toxic, but some can have mild toxicity if chewed. Make sure you know exactly what plant you have before applying its sap to your skin or using it in any other way.

Aloe is beautiful and brings luck in many cultures, but it can send a mixed signal in others. Consider where you’re sending your gift before assuming it will have the same symbolism everywhere. For more, see our guide to successfully growing Aloe plants at home.

If you’re looking for your next Aloe plant to add to your collection, see our in-depth guide to the best plant shops delivering Aloe plants nationwide. 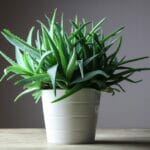 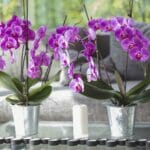