The Meaning, Symbolism, and Cultural Significance of White Lotus Flowers

In this guide, we’ll take you through everything you need to know about the meaning and symbolism of white lotus flowers. The beauty of a white lotus flower goes beyond its aesthetics and is considered sacred by many cultures and religions.

The Ancient History of the White Lotus Flowers

Perhaps the earliest depictions of the lotus flower were found on cave walls in the form of hieroglyphics. Ancient Egyptians associated the lotus plant with transformation, specifically, death, rebirth, and the afterlife. The civilization also saw a relationship between the lotus and Ra, the sun god, and the rising sun itself.

Lotus flowers showcase many different colors, and the white lotus flower is a source of particular intrigue. While the petals are white and pure, the plant’s roots, by stark contrast, are deeply embedded in muddy water. It represents the significant contrast between light and dark, clean and dirty.

The color white is often associated with purity and newness. In psychology, it’s the color associated with a fresh start or expecting something new in one’s life. Many believe that it essentially represents a symbolic blank canvas to do whatever you want: allow your creative juices to flow or become anything your heart desires.

In terms of the white lotus flower, it is lauded in many religions as being symbolic in various ways. Most notably, it plays an important role in Buddhism, Hinduism, and even Christianity.

White lotus flowers are one of the most popular colors. They signify many things, including beauty, grace, purity of mind, wealth, knowledge, fertility, and faith. Their worldwide popularity and relevance have gained them the name “Womb of the World.”

In Buddhism, the white lotus flower symbolizes purity of mind, body, and spirit. However, according to Buddhist teachings, it’s necessary for humans to experience suffering before they can ultimately reach enlightenment. Buddhists believe that suffering is a normal part of being human and that enlightenment and happiness cannot be achieved without it.

The Buddhists also believe that the white lotus flower has a relationship to awareness and spiritual perfection.

Often, the Buddha is shown to be sitting on a fully bloomed white lotus flower in the lotus position. That is believed to represent that a person’s spiritual awareness and heart are not yet open until they reach enlightenment from the inside out through teachings.

The white lotus flower has similar meanings in Hinduism, where it represents one’s ability to expand their awareness so that their soul can fully evolve.

Often, Hindu artwork shows goddesses such as Lakshmi, Saraswati, and Vishnu sitting or standing on a lotus flower. Sometimes, art may even show the flower growing from Vishnu’s navel. Saraswati is usually shown wearing a white sari and surrounded by white swans on either side of her.

The Hindus also associate the white lotus flower with beauty and a state of unattainability.

What are Other White Lotus Flower Meanings?

White is one of the most popular color choices for lotus flowers. The white lotus is often referred to as the “Womb of the World” and carries other meanings besides the ones found in religions. Fertility, knowledge, beauty, grace, wealth, and faith are among those meanings.

In China, it’s believed that the white lotus flower and the entire lotus plant have medicinal properties.

The Ancient Greeks believed the white lotus flower meant innocence and modesty. More recently, it’s been representative of a group known as the Lotus Eaters.

The beauty of a white lotus flower goes beyond its aesthetics, carrying deep symbolic meaning in religions and cultures worldwide. This sacred white lotus flower serves as a pedestal for divine figures in religious art and represents spiritual awakening, purity, and faithfulness. 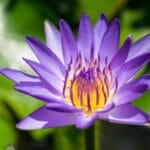