Everything You Need to Know About the Zinnia Flowering Season

For many gardeners, zinnias are some of the showiest stalwarts of summer. These annuals produce big, bold flowers that last for several months, allowing you to enjoy them right through until fall. Zinnias are well-adapted to the long summer season because they are drought-tolerant and love the sun. In this article, we’ll cover everything you need to know about the zinnia flower season, including tips to maximize blooming each year in your garden.

When are Zinnias in Season? – The Essentials

Zinnias are annuals that have a long flowering season. The zinnia season usually lasts from early summer until fall. Once the first frosts arrive in late September or early October, zinnias will deteriorate rapidly. Some zinnia cultivars may start blooming in late spring and continue until fall.

Zinnias are members of the daisy family (Asteraceae) and belong to the sunflower tribe (Heliantheae). The Zinnia genus contains 22 recognized species, with Zinnia elegans, Zinnia angustifolia, and Zinnia haageana being the most common. Zinnias can either be flowering annuals or bushy shrubs, or sub-shrubs.

Zinnias are endemic to parts of Central and South America and the southwestern parts of the United States. The genus originated in Mexico and thrives in arid, hot habitats such as dry grasslands and scrublands. The Zinnia genus was named as a tribute to Johann Gottfried Zinn, an 18th Century German botanist.

These annuals produce single, double, or semi-double flowers on the end of tall, sturdy stems. Zinnias grow in clumps, with each stem growing between 1 and 4 feet tall and bearing a single flower. Zinnia flowers come in colors such as lilac, pink, purple, orange, red, green, and white. Organic pesticides are beneficial throughout the growing season to ward off common zinnia flower pests and diseases.

The sheer beauty of zinnia flowers also extends to their meaning and symbolism. Zinnias represent both romantic love and platonic love between friends. They also symbolize celebration and reunions, especially between old friends.

Zinnias also have several impressive benefits and uses. Single-flowered varieties attract pollinators such as bees, butterflies, and hoverflies. Zinnia flowers are also edible, although they have a reasonably bitter flavor and work better as salad garnishes.

Zinnias are also non-toxic for humans and pets, so you can safely grow them if you have cats or dogs.

When are Zinnias in Season?

Most zinnia cultivars flower from early summer until fall, so they are usually in season from July to October. Zinnias are not hardy annuals and will die off when the first frosts arrive in the fall. Some varieties, such as ‘Double Zahara Raspberry Ripple’ or members of the ‘Profusion’ Series, start blooming in late spring.

After the impressive flowers have wilted, zinnias start dying back towards the end of the season. Once the remaining foliage is exposed to fall frosts, zinnias will rapidly die back. As annuals, zinnia plants only last for one season before they need to be replaced.

How Long Does the Zinnia Season Last?

The zinnia flowering season lasts about four to five months, typically between July and October. However, a few cultivars have a more extended flowering season that starts in late spring or June. Cultivars like the ‘Profusion’ Series have been specifically bred to flower earlier.

Zinnia plants can bloom throughout the season, although individual flowers last approximately two weeks. To encourage a sequence of strong flowers, deadhead your zinnias when the flowers start to wilt. This allows you to enjoy these fabulous flowers right up until the frost hits.

Zinnias will last longer when given ideal conditions. These drought-tolerant annuals can handle hot temperatures and full sun but do need fertile, well-draining soil. Zinnias will also need watering and fertilizing once weekly if you want the best blooms.

Factors That Influence the Zinnia Season

Providing a suitable climate will help your zinnias enjoy a more extended flowering season. Zinnias are well-suited to hot, dry, sunny conditions and don’t handle the cold or shade very well. Most zinnias will be comfortable in Zones 2 to 11 if they are planted after the last spring frost.

Zinnias hate the cold, so it’s vital to keep this in mind when growing them. Avoid planting or directly sowing zinnias until the last spring frost has passed. This ensures that the soil is warm enough for your seeds to germinate or for young plants to thrive.

Zinnias are pretty easy plants to grow, especially for inexperienced gardeners. The most important consideration when growing zinnias is sunlight. These annuals need 6 to 8 hours of full sun every day. Try to provide direct morning sunlight because it’s less intense than afternoon sunlight.

Although they are drought-tolerant, zinnias need watering approximately once a week. This helps keep the stems strong and encourages more flowers. If a zinnia starts looking droopy or the leaves start wilting, it’s time to water.

Zinnias need fertile, well-draining soil to produce lots of flowers. They will grow happily in chalky, loamy, sandy, or clay soils incorporating plenty of compost or organic matter. Fertilize established zinnias once every week or two with fertilizers that are high in phosphorus. This helps fuel flower growth.

Although most zinnias flower between early summer and fall, some cultivars can flower earlier. The ‘Profusion’ Series, in particular, is designed to start flowering in late spring. Some members of the ‘Zahara’ Series will also bloom from late spring and continue until the frosts arrive.

The three most common species of zinnias are Zinnia elegans, Zinnia angustifolia, and Zinnia haageana. Hundreds of cultivars have been bred from these three species. Each of these species flowers at a slightly different time, which may influence when your zinnias start flowering.

When you plant your zinnias can have a significant impact on the length of their flowering season. If you’re starting zinnias from seed, sow them in trays between February and April. Keep the young plants inside until the final spring frost has passed. Then plant them outside to ensure that they thrive.

If you want to sow your zinnias directly into the soil, sow the seeds from May to June. Again, ensure the last spring frost has passed because zinnias will struggle in cold temperatures. The flowering season will be drastically reduced if you plant zinnias outside when it’s still too cold.

Zinnias are annuals, which means they complete their entire life cycle within one year. Sowing zinnias from seed is always best rather than buying plants from a nursery. However, if you do buy a mature zinnia plant, put it into the soil near the start of the growing season. This gives you the longest possible run of flowers.

How to Extend the Zinnia Season

With a few simple actions, you can encourage zinnias to produce more blooms during the flowering season. The main one is deadheading any spent or wilting flowers. This encourages younger buds to develop into a fresh round of flowers, extending the season.

In most cases, each zinnia stem will start producing new buds when its main flower is mature. When deadheading a zinnia, cut the spent flower just above a young bud with a sharp pair of secateurs. This allows the plant to redirect as much energy as possible into producing new blooms.

Maintaining a regular watering and fertilizing regime also helps extend the zinnia flowering season. Zinnias usually need to be watered once a week or whenever the top couple of inches of soil feels dry. Growing zinnias in a hotter, drier climate, you’ll have to water a bit more frequently.

Providing zinnias with the proper nutrients helps encourage them to flower profusely. Feed zinnias every one or two weeks with a fertilizer that contains more phosphorus. This mineral helps promote the zinnia to produce flowers rather than foliage. Balanced fertilizers will also work perfectly well, although high-phosphorus fertilizers produce bigger blooms.

Using zinnias as a crop can also help extend the flowering season. Zinnias make excellent cut flowers (as well as dried or preserved flowers) because they have sturdy stems and will grow back after being cut. Zinnia flowers last approximately 7 to 12 days in a vase of water, so you can keep cutting throughout the season.

This cut-and-come-again approach encourages the plant to keep flowering. To take zinnia cuttings, select a strong stem with an open flower. Make a clean cut just above a new bud and remove the leaves before placing the stem in a vase.

Zinnias are fantastic, low-maintenance flowers that can be enjoyed for several months. The flowering season for zinnias typically lasts from early summer until fall. Zinnias will start to die back when the first frosts hit in October. Some zinnia cultivars may begin blooming earlier in late spring or June. 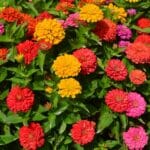 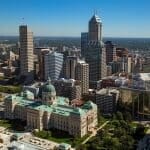