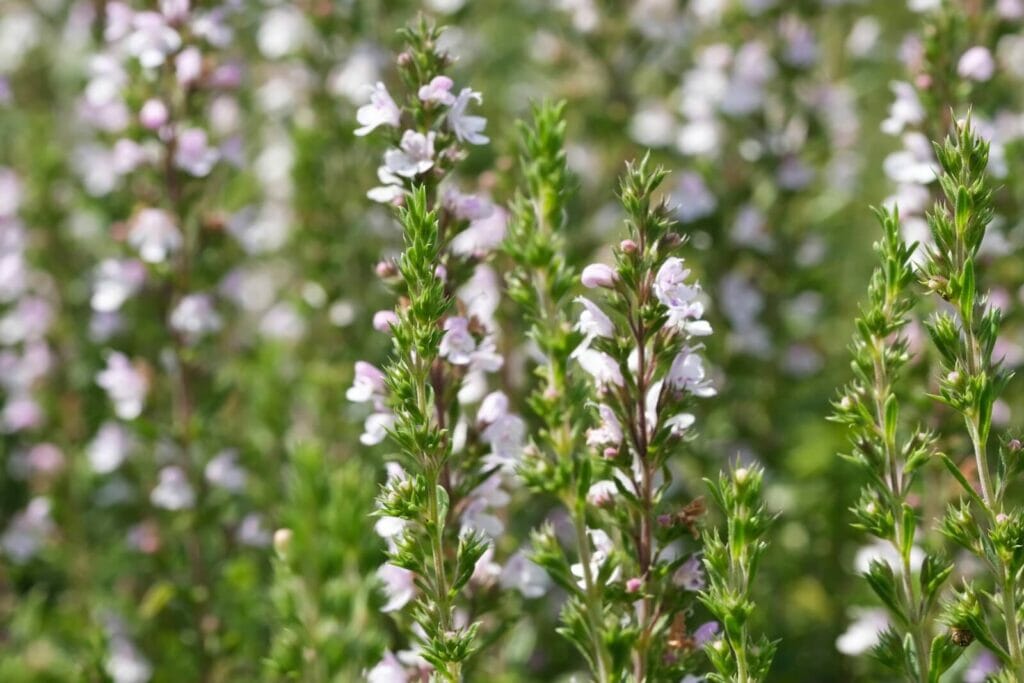 Everything You Need to Know About Summer and Winter Savory

While we use the word “savory” on an everyday basis in reference to any stew or rack of lamb, many people don’t know there exists an herb that goes by that very name. Savory is as ancient and storied as parsley, sage, rosemary, and thyme – though more often than not these days, it’s buried in herb and spice blends, rather than shining on its own.

Ready to change that? In this post, we’ll take a look at the history and meaning of savory, its place in culture and cuisine, and what you can do with it in your own life. At the very least, you’ll leave armed with some interesting tips for your next cocktail party – at which you might consider gracing a Bloody Mary with its vibrant green leaves. But let’s not get ahead of ourselves.

In ancient Rome, the savory herb held the symbolic meaning of love and romance and was considered a natural aphrodisiac. Summer savory in particular was commonly used as a potent solution to arouse sexual desire.

Pliny the Elder – a famous naval commander, natural philosopher, and historian of the early Roman Empire – gave it the name “Satureja.” The word stems from “satyr,” the mythological half-man, half-goat with a horse’s tail.

Greek physician Pedanius Dioscorides, who lived in the first century CE, also had complimentary things to say about savory, noting it was excellent for the health. He called it Thymbra due to its similarity to thyme. It has played a role in cooking and medicine ever since those days.

Ready for the crash course on savory’s history? There’s a lot to learn about the plant sometimes known as “bean herb,” so whip out that field notes journal and keep reading.

In What Family and Genus Is Savory?

The leaves, flowers, and branch formation are similar to the thyme plant for a reason, so Dioscorides had good cause to name it “Thymbra.” Along with mint, sage, rosemary, thyme, and other Mediterranean herbs, savory belongs to the Lamiaceae family. The plant has kept the name bestowed upon it by Pliny, Satureja, in the form of its genus.

These are similar, with the obvious difference that their favorite growing times correspond to their names. The other main difference is that while winter savory is a perennial, summer savory is an annual. It won’t overwinter successfully.

Other, less-well-known species (such as Satureja douglasii) have different characteristics. That species, for instance, has broader and flatter leaves that look and taste much like mint.

What Are Savory’s Main Botanical Characteristics?

Again, the plant is similar to many other Mediterranean herbs. It has long branches forming a radial pattern, with small leaves arrayed along them. In late spring and summer, all plants in the genus produce small blossoms that range from white to light pinkish purple to lilac.

Winter savory is sharply flavored, almost spicy. Its taste is closer to thyme and rosemary – a delicious fragrance perfect for heavier dishes, but probably too much for a salad. Summer savory, on the other hand, is ideal for salads or even cocktails. It is closer to mint or basil in flavor, despite the smaller flowers.

To What Regions Is Savory Native?

Beyond the Mediterranean – Southern Europe and Northern Africa – savory is also native to Central Asia and the Middle East. Taxonomists originally classified many similar herbs from the so-called New World in the Satureja genus as well, but they have since moved them.

Uses and Benefits of Savory Flowers

While the most obvious use for savory is in cooking, its uses do extend beyond that. Some of the most common include:

Throughout history, savory has starred in many different applications. Even today, it offers curative benefits for coughs and sore throat. It also aids with cramps, diarrhea, nausea, indigestion, gas, loss of appetite and frequent thirst. Some even say it increases sexual arousal, though as a general rule, studies are slim in that area.

Because it produces such an abundance of flowers no matter what the species, savory is the perfect addition to any pollinator garden. Birds, butterflies, honeybees, native bees, native flies, and even moths and bats all love its tiny blossoms. Plant summer savory and winter savory to extend blooming from late spring all the way to fall.

In cooking, savory typically plays the role of other Mediterranean herbs. Blenders commonly add it to Herbs de Provence or Mediterranean mixes for use in soups, stews, roasts, and even baking bread, while the lighter varieties shine in salads and drinks.

Savory summer is non-toxic to dogs, cats, and horses, reports the American Society for the Prevention of Cruelty to Animals.

In ancient Rome, the savory herb held the symbolic meaning of love and romance and was considered a natural aphrodisiac. Summer savory in particular was commonly used as a potent solution to arouse sexual desire.

Pliny the Elder – a famous naval commander, natural philosopher, and historian of the early Roman Empire – gave it the name “Satureja.” The word stems from “satyr,” the mythological half-man, half-goat with a horse’s tail.

Greek physician Pedanius Dioscorides, who lived in the first century CE, also had complimentary things to say about savory, noting it was excellent for the health. He called it Thymbra due to its similarity to thyme. It has played a role in cooking and medicine ever since those days.

The Meaning and Symbolism of Savory Flower Colors

Savory has no shade-specific meanings that we know of, though who’s to say what happened in Pliny’s day? What we do know is that flowers in general have definitive meanings by color. And as savory comes in a variety of hues, it can lend itself to sending a variety of messages in the language of flowers.

White traditionally symbolizes honesty and sympathy. This color is often used to send condolences but is also used more happily in bridal bouquets. Send it on happy occasions and sad.

Pink is a “playful” hue, according to the same site. It works well coming from friends or family members, rather than romantic partners. Happiness and gentleness are hallmarks of pink, so send it for getting well or just because.

Purple is historically a royal color. Since most of us are solidly in the peasant class these days, purple is more usefully classified as a color meant to convey wealth, good fortune, and new beginnings. It’s a great color for housewarming!

Because savory is an herbaceous bush, it doesn’t make the best accompaniment to bouquets and vases. Rather, you’ll do better giving it as a potted plant, along with an explanation of what the flower color means!

How to Care for Savory Flowers/Plants at Home

Winter savory is hardy in USDA zones 6 to 8, strictly speaking, though some recommend it for the wider zones of 5 to 11. Summer savory is an annual almost everywhere in the United States, so zones don’t apply.

Whether summer or winter, grow savory as you would any other herb. Plant in sunny, well-drained soil, keep moist and prune often.

Now that you’ve got the complete rundown on savory, you can grow it right at home or use it to convey good wishes to those you love. Whatever you do, do it in the full knowledge of good health and delicious things to come!

What’s the difference between summer and winter savory?

These two herbs look remarkably similar. Summer has a much milder flavor, though, and its blossoms come on a bit earlier.

How tall do savory flowers grow?

Savory tends to form bushy clumps, usually no more than a foot or two.

Can you eat summer savory flowers?

Yes, though they wilt quickly. Pick them carefully, right before serving on a salad or in a drink.

As it is an annual, it’s not invasive at all. Winter savory grows slowly and takes well to pruning, so you’re safe there too.

What is summer savory used for?

Most commonly, it is used for cooking savory dishes – see what we did there? But it also works for sweet drinks and can even be fun in shortbreads. 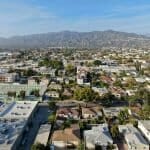 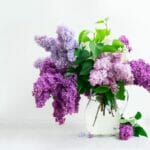