Everything You Need to Know Lotus Flower Meaning in Christianity

In this guide, we’ll take you through everything you need to know about the meaning and symbolism of lotus flowers in Christianity. The Lotus flower is perhaps best known for its historical, cultural, and spiritual significance in Hinduism and Buddhism. More recently, because of the diversity of cultures, it has gained prominence in Christian faiths.

Lotus flowers also have profound meanings in Christianity. Generally, they represent purity and the creation of the universe. While Christians generally do not accept how material things like lotus flowers bear divine properties, the associations between sacred flowers and Jesus have been recognized.

One example is the fact that lotuses rise from the muddy water for three days before it blooms. Another is that these plants’ roots can reach up to 6 ft deep, plus the seeds live for a long time and can be resurrected after a period of inactivity. All of these somehow relates to the crucifixion and resurrection of Jesus Christ.

The Origins of Lotus Flower Meaning in Christianity

One of the most distinctive features of lotus plants is they’re adapted to grow in floodplains that have slow-moving rivers or expansive deltas. Sometimes, spirituality can seem to have a slow-moving nature in Christian life, but like the Lotus, a moment of revelation brings the flower of faith.

While most lotus flower seeds are eaten by wildlife or by people in their daily meals, the remaining seeds can remain dormant for vast periods, only reawaking at the moment that the conditions call them.

The oldest recorded lotus germination was from seeds that were 13,000 years old. The Chinese regard the lotus as a symbol of longevity. Because of this, it has a wide range from Indochina to East Asia, Russia, and even Egypt.

However, for most of the West, the lotus is not a naturally occurring plant. So its mystical nature is even more baffling at times and more revered than in the counterparts of Buddism and Hinduism.

The lotus flower can open in the morning and close in the night; therefore, it is associated with rebirth transfiguration and regeneration.

As a metaphor, the closed-butted lotus flower relates to a person’s infinite possibilities. The opening is a metaphor for the creation of the universe.

The white flower is associated with purity and virginity. It is the strength to move from the dark into the light as the budded lotus is dark, and as it opens, it becomes lighter and lighter.

The lotus grows in muddy waters; however, it rises through on a long, strong stem to produce beautiful pink, white, yellow, and blue flowers.

In Christianity, this is viewed as determination, inner strength, and deep faith to overcome any difficulties.

With the introduction of Christian teachings across India and China, the lotus flower was frequently used in the iconography of the Saint Thomas Christians and the Church of the East, respectively.

The Saint Thomas Christian Cross and the Nestorian Cross frequently displayed a blooming lotus flower beneath the symbol.

Lotus Flower Colors and Their Meaning in Christianity

More so now than before, because of the diversity of cultures that have influenced the Christian faith, different lotus flower colors carry their own unique meaning and symbolism in Christianity.

The blue lotus represents the triumph of the spirit over the senses. It is the seeker who gains knowledge and uses it in profound ways.

The White lotus is the state of purity. It is the perfect blend of mind and deep spirituality. The lotus flower in Christianity is predominantly the white lily. The white lily lotus represents Mary, mother of God in the Bible. She is the queen of paradise. Purity and virginity and kindness. Without her, there is no Resurrection in life.

The pink lotus is representative of all divine. It is God the Father, the Son, and the Holy Spirit. The rhizome and stalk, the seed, and the flower.

The Red lotus is the gift of a kind heart and compassion towards others.

Considered by many cultures and religions as sacred, the lotus flower also carries significant symbolism and meaning in Christianity. Most commonly, lotus flowers represent purity and the creation of the universe. 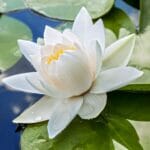