When Are Hydrangeas In Season? (Essential Guide)

Everything You Need to Know About the Hydrangea Flowering Season

One of the most popular cut flowers and garden plants worldwide, everyone looks forward to the Hydrangea season with great excitement. With a variety in blooming times between the species, we can enjoy these symbolic flowers from spring to summer and even into fall. This article breaks down the specifics of the Hydrangea blooming season, so you know what to expect when growing these plants.

When Are Hydrangeas In Season? – The Essentials

Hydrangeas are typically considered summer flowers, with most blooming in early to mid-summer. Seasons differ depending on the species and cultivar chosen, with some starting in spring and others extending into fall. Other external factors like climate, planting, pruning, and care can also influence the timing and length of the Hydrangea season.

With more than 75 species in the genus Hydrangea, there is plenty of variety and tons of beauty to look forward to. This genus is also known by its previous name Hortensia commonly, but most stick with the general term Hydrangea to cover the many different species of these plants widely grown in home gardens. Their prizes for their symbolic value and host of uses and benefits.

Most species are considered short shrubs, growing to a couple of feet tall once they mature. But, some species are closer in growth habits to small trees, and others feature climbing vines that envelop structures and nearby trees. Most hydrangeas are relatively straightforward to propagate as well.

The name Hydrangea literally translates to ‘water vessel,’ while their previous genus name was given after astronomer Nicole-Reine Hortense Lepaute. They are one of the most popular ornamental garden plants around the world and are also grown as cut flowers, popular in wedding bouquets and décor. Hydrangeas are also available in several beautiful colors.

Hydrangeas are native to the Americas and Asia, depending on the species. Most come from Asia, found growing natively in China, Korea, and Japan. But, many of the commonly grown Hydrangea species like the Smooth Hydrangea and Oakleaf Hydrangea are native to North America.

The word Hydrangea does not describe one plant but a large group of plants, each with its own characteristics and blooming times. While there are plenty of species to choose from, these are the ones commonly found in home gardens:

When Are Hydrangeas in Season?

Hydrangeas are generally considered summer flowers, at their best during the warmer months when they are most often available as cut flowers. But that doesn’t tell the whole story. Different Hydrangea species have slightly different seasons, ranging from mid-spring all the way through to mid-fall, depending on your climate. Most benefit from fertilizing a couple of times each season.

There are also other factors that can influence the season, such as planting time, climate, and correct pruning technique. But you can be sure that no matter the species, most blooming times will peak during the summer seasons, varying in length.

How Long Does The Hydrangea Season Last?

The length of the Hydrangea season is again largely dependent on type. Some bloom later than others, shortening their season, while others that start in spring have a more extended season. Sudden cold weather may also cut your flowering season short, depending on your climate. Pruning can also push back the initial blooming time, making the season shorter even in species with long-blooming times.

Generally, you can expect your Hydrangeas to bloom for about three months, with most of that occurring during summer. Some may be shorter, others longer, so make sure you consider the external factors involved to plan ahead.

The biggest influence on the start and duration of your Hydrangea’s blooming season is species. Each species has a slightly different season, with most overlapping during the months of spring. Not only does the start time differ for each species, but the length of the season also changes. Take a look at the specifics below to find out the exact season for each species.

The second biggest influence on the Hydrangea season is climate. Each species has a different level of tolerance to cold and heat, and this will affect when and for how long they bloom. Areas with warmer climates will generally see blooms pop up earlier in the season. But, excessive heat can also limit the blooming period, shortening the season later on.

In areas where the temperatures only increase around late spring and dip down again soon after summer is over, the growing season will generally be limited to that period, depending on your chosen type and its tolerance for the cold.

Hydrangeas need a bit of time to settle into the soil after planting before they will begin blooming prolifically. The plant you bought may already have flowers as it sits in the pot, but once it is moved to the ground, it will face a bit of stress and focus on root growth at the expense of the flowers. Once the plant has become settled, it will kick off its true blooming season.

Pruning Hydrangeas is a tricky task and varies depending on your chosen species. If you prune at the wrong time, you may delay the start of the blooming season, shortening its timespan overall.

This isn’t always a bad thing, though, as pruning away flowers can cause the plant to grow larger over the season, meaning you’ll have even more flowers the following year.

Incorrect pruning according to your Hydrangea type can also stop the blooming season from happening altogether. For Hydrangeas that bloom on old wood, cutting off those buds at the end of the season will stop any new blooms from emerging. However, with some patience, you can see the flowers pop up again the following year. Late Autumn is also a good time to consider moving or transplanting your hydrangeas if needed.

It’s worth noting that hydrangeas are considered toxic, so it’s prudent to wear a pair of gardening gloves throughout the process.

The proper care is essential in making your Hydrangea blooming season last as long as possible. Underwatering, overwatering, lack of nutrients, or lack of sunlight can drastically shorten the blooming season or end it entirely if the problems are not resolved.

Make sure you keep your plants happy and healthy throughout the season – and even when they are not in flower – to allow them to bloom to their full potential.

The most significant determinant of flowering season is species. Take a look at these popular Hydrangea types and their blooming seasons to decide which one best suits your needs:

Keep in mind that the specific cultivar within each species can also have an impact on blooming time. Check your chosen cultivar before purchasing so you know what to expect come summertime.

Hydrangea blooms are something all gardeners look forward to, whether out in the garden or brought indoors to use as cut flowers. As there is no predefined Hydrangea season, it’s important to understand your particular species and the potential influences on the season to get the most out of these wonderful plants.

To enjoy the fruits of your labor for longer, see our essential guide to drying and preserving hydrangea flowers at home. 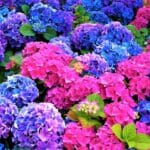 How To Fertilize Hydrangeas (Essential Guide) 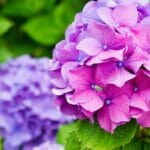 What Colors do Hydrangeas Come In? (Essential Guide)