Ficus Ginseng (Ficus microcarpa), is a smaller tree often grown indoors as a houseplant. When you’re looking for a plant with a distinctly tree-like look and easy care, you can’t go wrong with this member of the Ficus family. However, watering correctly is one of the more challenging parts of caring for this plant. This guide will take you through everything you need to know about when and how to water Ficus ginseng plants at home for optimal care and growth.

When and How to Water Ficus Ginseng – The Essentials

For optimal care, Ficus Ginseng soil should never dry out completely. It’s hard to fully saturate dried soil, so it becomes damp enough for the preferences of this plant. Keeping it evenly hydrated is best, but it does require regular checking since water use can always change as the conditions change.

As a part of the large Ficus family, Ficus Ginseng is one of the most popular small trees grown indoors. The scientific name is Ficus microcarpa, but the related Ficus retusa is sometimes called by the same common name.

The Ficus genus is part of the larger family that includes Fig and Mulberry trees, but this plant doesn’t produce any kind of fruit. It’s native to tropical areas in Southeast Asia, so it’s used to humid and sometimes wet environments that stay warm year-round.

They can’t handle temperatures below 60 degrees F and prefer humidity levels above 70%, and they do best in locations with plenty of bright, indirect light and monthly fertilizing during the growing season. The green leaves are glossy and attractive, but the large root gets the most attention since it grows above the soil line in a bulbous form.

The Role of Water in Plant Health and Development

Water provides the fluid to move nutrients and waste products throughout the plant’s structure. Without sufficient water, the plant’s tissues become weak and floppy.

The Ficus Ginseng stores moisture in its large roots, but it still needs a regular supply of water to keep new leaves growing to replace the old foliage that is lost.

If a plant receives too much water, its roots can rot, or the tissue may become soft and wrinkled from storing too much fluid in it.

What Type of Water is Best for Ficus Ginseng?

The Ficus Ginseng is sensitive to the build-up of minerals in the soil. Soft water is best, but avoid water from a softener system since it will have a high sodium level.

A good way to get soft, mineral-free water is to gather rainwater in a container and cover it to keep mosquitoes out. Bottled or filtered tap water with no added minerals can also work just as well. Apply the water at room temperature to prevent stress on the roots.

When to Water Ficus Ginseng

The trick to watering the Ficus Ginseng is to not let the soil dry out completely. It’s hard to fully saturate dried soil, so it becomes damp enough for the preferences of this plant.

Keeping it evenly hydrated is best, but it does require regular checking since water use can always change as the conditions change. If you notice the top inch or two of soil has dried out, it’s time to water again.

Learn what your Ficus Ginseng needs in the way of hydration for good growth.

How Do You Know When a Ficus Ginseng Needs Watering?

Many plants need to dry out at least two to three inches down before receiving more water. Watering the Ficus Ginseng at this point leaves it drier than it prefers.

Instead, water the plant whenever the top inch or two of the soil is dry. This can be done daily in the summer if the plant is grown in a highly controlled Bonsai form where little soil is used around the roots.

Don’t let the Ficus Ginseng go so long without water that it starts to show clear signs of stress. Yellowing leaves, drooping twigs, and shrunken roots all indicate a plant has gone far too long without water. It’s hard for this plant to recover from being fully dried out, so water based on the soil’s dampness rather than waiting for a specific symptom from the plant.

How to Check When to Water Ficus Ginseng

Your finger is the most accurate probe for checking the soil’s moisture level. If you must, try a chopstick and feel the firmness of the soil as you poke it. Wet soil will be firm and harder to poke, while dry soil is loose and easy to move aside. If you get used to the difference in the weight of the pot from when it’s dry and well-watered, you can also check just by picking up the plant.

Assuming you’re not using a Bonsai technique for growing, your Ficus Ginseng plant should only need watering once a week or less. If you find yourself watering every other day, consider a soil mix that holds slightly more moisture for the plant. In the winter, you may be able to go two weeks or longer before watering if the plant isn’t near a heating vent.

Growing this plant in a warmer climate, especially one without humid air, will result in the need for more watering. Keeping it near a humidifier or using soil that holds more moisture may result in less watering, so watch carefully rather than sticking to a routine. For more, see our in-depth guide on where to position ficus ginseng plants for optimal care.

Ficus Ginseng tends to use far less water in the winter than in the summer due to partial dormancy. While they’ll still grow little, they won’t put on a lot of new growth and could suffer from root rot if you over-water them. Check the soil before adding any water, even if you think it’s time for a top-up.

How to Water Ficus Ginseng

The Ficus Ginseng prefers bottom-up watering, which occurs when you set the plant in a bucket or tray of water. However, most Bonsai forms require top-down watering due to the exposed roots and lack of soil. Consider the amount of soil before choosing a method, and always make sure the plant drains completely before sitting in a saucer, so the roots aren’t kept standing in water.

If you manage to give your Ficus Ginseng far too much water, you’ll notice the visible roots getting swollen and even soft to the touch. The twigs will become much more flexible and start to lose healthy-looking leaves that may or may not turn yellow first.

If the problem continues, you’ll see the roots rupture and rot as the leaf loss spreads. It’s hard to treat an overwatered Ficus Ginseng because it absorbs the water in its roots, so try to avoid the problem in the first place.

It’s also prudent to stay on top of any common Ficus ginseng pests, which can be attracted to stagnant or saturated soil bases.

Underwatering is far more common in the Ficus Ginseng. Yellowing, wilting leaves that drop off after turning brown are the most common sign. The roots may also look shrunken or sunken in on the surface. A lack of steady growth is the earliest sign your plant isn’t getting enough water regularly.

What to Do In Between Watering Cycles

Ficus Ginseng likes a high humidity level of 70% or more. If you can’t set the plant up next to a humidifier, consider using a heated humidity tray or a misting bottle. While they aren’t quite as good as a full-sized humidifier, they’re easy to use in the average home.

Watch the leaves for signs of color loss or a lack of glossy surfaces for signs of watering stress. Check the soil with your finger as often as possible to stay on top of the watering for this plant.

What are the most common signs Ficus ginseng needs watering?

Ficus Ginseng won’t show signs of needing water until severe stress, at which point it will drop leaves and wither.

What is the best way to water Ficus ginseng?

Bottom-up watering is best for this plant.

How much water does Ficus ginseng need?

Keep the soil moist so that only the top inch or so is ever allowed to dry out.

What do I do if I overwater my Ficus ginseng?

Change the soil mix for a better-draining type and give the plant plenty of warmth to encourage evaporation.

Can I water my Ficus ginseng with tap water?

Tap water is only acceptable if it is low in minerals. Rainwater or soft filtered water is a better choice.

Give the Ficus Ginseng as much water as it wants to ensure those large, sculptural roots don’t wither and lose their shape. With optimal care, these symbolic and beneficial plants will thrive for years to come. 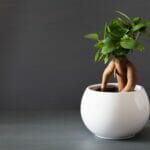 Where to Position Ficus Ginseng in the Home 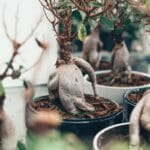 How to Fertilize Ficus Ginseng at Home