When and How to Repot a Calathea Plant (Essential Tips)

Everything You Need to Know About Repotting Calathea Plants at Home

Calatheas make a lovely addition to any plant collection. From its dark green foliage to its desire for humidity, this tropical houseplant offers a lot while requiring relatively little. However, it does need the occasional repotting to help it move into a bigger home with more room to stretch its roots. Don’t worry if your Calathea has been in its current pot for a few years. It’s easy to get it into a new pot when it’s time.

The most crucial factor when repotting Calathea is the soil mix. Aim for good drainage and a relatively loose mixture with some peat moss or compost to hold moisture. Use a pot or container that is only ½ inch larger than the root mass of the Calathea and wait until the plant is showing signs of outgrowing its current pot.

Why Repotting Calatheas is Necessary

All types of Calathea plants need occasional repotting for the same reasons that all houseplants need new containers and soil.

Some people repot their houseplants any time they show issues like slow growth or drooping foliage, or brown leaves. However, make sure a Calathea actually needs a new pot before assuming that’s the cause of any problems with it. These plants like to be slightly squeezed by their containers, so rapid repotting to larger containers can slow their growth instead.

How Often Do Calatheas Need Repotting?

Calathea generally only need repotting when they truly outgrow a container, or the soil needs refreshing. That means most plants only need a new pot every year at the most.

It’s not uncommon for smaller or slower-growing varieties to need repotting every other year instead. Mature plants that reach their full size still need a new dose of soil every three years at least. Use the same container if the roots aren’t pushed up to the sides yet.

Additionally, you’ll want to consider repotting if your calathea plant has suffered from any pests or diseases that have affected the soil base or shown signs of root rot or decay.

The Best Times of Year to Consider Repotting Calatheas

Calathea recovers the fastest and benefits the most from being repotted in the summer, which is its active growing season (now’s a good time to consider as well). Of course, an ailing or badly compacted plant can be repotted any time of year.

Houseplants aren’t too sensitive to seasonal changes when compared to plants grown outdoors. If you can time the chore, aim for the spring or summer. This is especially recommended for larger mature plants since repotting them outside can make a lot less mess and Calathea must stay above 61 degrees F to avoid shock.

Some plants prefer soil mixes with rocks and bark, which encourages fast drainage. Other plants want lots of peat moss and compost to keep moisture around the roots. Calathea plants want both of these things simultaneously because they need good drainage and moisture in equal amounts. One good way to achieve this is to buy a cactus or orchid mix and add in about 25% peat moss or aged compost.

To encourage their drainage, soil mixes that are a little too moisture retentive can also be enriched with vermiculite and orchid bark by up to 50%. Making your own potting mix will give you the best results when repotting Calathea plants.

What Tools Will I Need When Repotting Calatheas?

Calathea plants don’t have unusual roots or thorns, so they’re easy enough to repot by hand. You may want to have a small trowel if you think the plant may be stuck in its current container or want to divide a large Calathea into two smaller plants.

Try putting down a small tarp or layers of newspaper as well to keep loose soil from making a mess of your work area.

While some houseplants prefer lots of space to stretch their roots, Calathea plants prefer smaller containers.

Like many other tropical plants, Calatheas grow best when slightly constricted by a container only just a little larger than its root mass. This helps regulate moisture levels around the roots and ensures the tips can find the nutrients they need as well.

It’s best to choose a potting vessel that is about ½ inch bigger than the current root ball of the plant. Plastic is a good material choice for this plant, but terracotta can work well too since they don’t mind damp soil.

Make sure the potting vessel drains well and doesn’t have edges or depressions that hold water, which encourages root rot in these plants.

How to Repot Your Calathea Plant

Calathea plants need high humidity and filtered light after repotting to recover quickly, so consider putting them near a humidifier or in the bathroom with the shower on. This minimizes wilting and shock from having their roots disturbed. Water normally and avoid fertilizing your calathea plant for a few months. In addition, looks to prune or cut back any past prime foliage.

Should I soak my Calathea before repotting?

If the plant is dry or the soil is particularly compacted, soaking the root ball briefly during repotting can help. However, it’s not usually necessary since Calathea are kept well-watered, and the soil should be damp enough to come loose easily.

Should you water a Calathea immediately after repotting?

Calathea plants do need immediate watering after repotting, even if you dampened the soil mix ahead of time.

Calathea plants aren’t fans of big pots with lots of room to spread out in. Instead, they prefer pots just a little bigger than their current root growth, with about ½ inch to spare.

Why is my Calathea limp after repotting?

These plants temporarily wilt or go limp from the shock of repotting. If the plant doesn’t perk up within three days, it may have gotten too cold or too wet during the process.

Should I mist my Calathea after repotting?

Misting or keeping the calathea plant near a humidifier for a few days after repotting helps reduce shock and wilting.

Should I fertilize my Calathea after repotting?

Avoid fertilizing for the first three months or o since the roots need time to recover.

Calathea plants don’t need repotting as often as many other houseplants. When they do finally need a new container, it’s a quick and easy process to swap them over. Consider refreshing mature Calathea plants once every two to three years, even if they don’t need larger pots at those points. New potting mix will keep the plants healthy and ensure the most vibrant colors in the foliage. 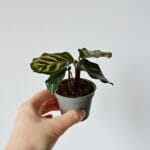 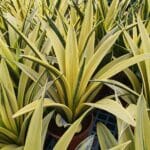