How to Prune Calathea Plants at Home (Essential Tips)

Calatheas are elegant plants that are easier to grow than many other options for indoor cultivation. As houseplants, the intensely patterned and colorful foliage doesn’t need much light to sustain it. However, you may need a little pruning now and again to keep the plant looking its best. Yet most varieties of Calathea don’t need much trimming, just a little clean-up now and again. Make sure you’re pruning your Calathea plants correctly with this simple guide.

Using sharp, long-tipped plant scissors, trim any damaged or dead leaves off Calathea as needed. The plant grows rapidly enough to need pruning at least once or twice a year. Always use sterilized tools to protect the plant from disease.

The Role of Pruning in Plant Health, Good Growth, and Overall Care

Pruning is one of the most overlooked parts of plant care. If a houseplant owner has heard of it, they may mistake it as a practice only needed for trees, shrubs, and outdoor plant life.

Yet almost all plants can benefit from a bit of pruning now and then. The benefits to houseplants, much like with trees or shrubs, include:

Some plants require pruning to grow well, but even those that don’t tend to respond well if trimmed with care.

In general, most plants can be pruned to remove damaged or dead material without ill effects. Methods of plant cultivation like bonsai require routine pruning to shape the growing material into a specific pattern.

For more, see our essential guide to calathea plant growth expectations at home.

How Fast Do Calathea Plants Grow?

When kept away from direct sunlight that stunts their growth, Calathea plants can grow rapidly in nutrient-rich, slightly acidic soil bases. However, they still tend to grow much slower than other houseplants.

Some varieties grow larger than others, with maximum size topping out around three to four feet for the biggest types. Most Calathea stay about 2 feet or under when fully grown.

This means there’s little need to keep them pruned just to help them fit into the home, unlike with some other houseplants. However, they will lose leaves over time to natural causes.

It’s also OK to trim a Calathea as needed to maintain the plant’s shape. If some leaves or stems grow faster than others, pruning can restore a rounded or more open shape to prevent crowding.

When is the Best Time of Year to Prune Calathea Plants?

Calathea goes primarily dormant in the winter, but removing any dead or damaged material during that season is acceptable. Just don’t expect a rush of new growth to start until the days lengthen in spring and summer.

Focus on limiting pruning (much like repotting or propagating) to spring and summer for the fastest recovery and most significant growth burst after pruning. If your Calathea blooms, which is pretty uncommon among those cultivated indoors, cut the flowers off when the stem dries out fully.

Don’t expect to need to prune this plant more than once or twice a year, and potentially even less often than that.

The Essential Tools for Pruning Calatheas

As a smaller houseplant that only has thin, easily cut stems, Calathea is best pruned with small scissors and snips. Look for scissors designed for plant trimming with longer tips and handles to help you reach between crowded stems and trim out just a few leaves at a time.

Bonsai scissors are a good idea for larger Calathea varieties that can get up to three feet tall. The stems on these plants can be thicker and harder to cut, but a sturdy part of garden shears will still work.

Some Calathea varieties are easily split or separated when they get full-sized. A sharp trowel and a pair of gloves make quick work of this task.

No matter the tool, make sure to sanitize it properly between uses. Cutting more than one plant with the same shears can spread disease, but even bacteria can multiply on tools used just for a single plant. Mix a diluted solution of 1 part bleach to 9 parts water to soak the tools in for at least 30 minutes after each use.

How, Where, and When to Prune Calathea

Most Calathea varieties are known for their bright colors and bold patterns. It’s perfectly fine to cut off leaves that lose their color and fade. Unless the leaf is still dark green, it’s not contributing much to the plant’s health once it starts to yellow or turn brown.

The same is true for the occasional flower stalk. Once a leaf has become damaged or lost its color, remove it by:

Don’t trim just the leaf off and leave the stem. This still contributes to an overcrowded and messy-looking Calathea. When it’s challenging to cut the stem all the way at the base, at least trace it back as far as you can into the crown of the plant. Waiting until a leaf fully dries out can make it a little easier to trace back to the soil level.

Avoid removing more than 20% of the plant’s leaves, or 10% if it’s already struggling, to ensure it has enough foliage to continue photosynthesis.

How to Shape Calathea Plants for Better Growth

Some Calathea plants look best loosely shaped into a mound or shrub form, while others with longer stems look good in general vase shapes. Since this type of houseplant needs high humidity and misting, don’t be afraid to remove overcrowded internal leaves to create more space inside the crown area. This allows for better air circulation and prevents fungal issues with the humidity.

Try trimming some of the smaller overlapping leaves from under the larger mature foliage for lower-growing mounded types. Removing a few layers of growth from the underside won’t change the look much but will help maximize nutrient flow to the more productive leaves.

Caring for a Calathea After Pruning

Avoid fertilizing a Calathea right after pruning since they don’t need much in the way of nutrients usually. Make sure to stick to the usual watering schedule since drying out after pruning will be extra stressful on the plant. A little extra misting can help it recover as well. If you removed a lot of foliage for losing color or yellowing, consider adjusting the light levels either higher or lower.

Calathea only needs the occasional leaf removed to look its best. This houseplant doesn’t have the tree-type of form to work well as a bonsai. However, you can still give it a mounded or open vase shape with selective pruning. Just be sure to provide the plant with a few months to recover after each trim. 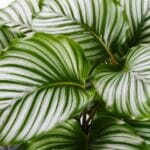 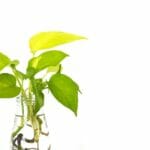 Where to Position Indoor Citrus Trees in the Home

When and How to Fertilize Anthurium Plants (Essential Guide)