Everything You Need to Know About Propagating Calathea Plants at Home

If you’re a houseplant fan, there’s a good chance you’ve noticed a Calathea before. Also called prayer plants or rattlesnake plants, these tropical beauties feature dark foliage with bright splashes of red, yellow, or silver in various patterns. Not only are Calathea plants relatively easy to grow compared to some tropical plants, but they’re also fun to propagate. In this guide, we’re going to take you step-by-step through how to propagate a calathea plant at home.

How to Propagate Calathea Plants – The Essentials

Calathea plants aren’t propagated the traditional way, but rather through division. This is as simple as cutting a mature plant in half, ensuring both sides have plenty of roots and leaves. Pot cuttings in a rich, well-draining soil mix and leave in a warm, humid environment for 3 to 4 weeks to allow the cutting to root.

Can all Calathea Plants be Propagated?

All plants in the Calathea genus, and even the larger Marantaceae family, can be propagated professionally. However, this doesn’t mean they will all succeed when propagated at home. Some varieties need special handling or hormones to trigger rooting and will be more challenging than others to turn into healthy new plants at home. Technically, Calathea plants aren’t propagated in the same way as other houseplants.

Can you propagate Calathea plants from seed, cuttings, leaf, other?

Unlike succulents and many other popular houseplants, Calathea plants are not propagated by taking a cutting. Cutting off a leaf from one of these plants and sticking it in soil, even with a lot of stem intact, will only lead to a dried up leaf. There’s no chance of a chunk of stem or root growing into a whole plant either. And unlike some houseplants, Calathea doesn’t flower readily enough to collect seed.

Instead, you use a technique known as division. It’s one of the simplest ways to multiply plants and can feel a little extreme or aggressive. However, it’s reliable and easy for homeowners to do.

You shouldn’t attempt to divide a Calathea unless you are comfortable with the risk of losing it since it will stress the entire plant.

Can Calathea Plants grow in Water and/or Soil?

Calathea plants don’t thrive in pure water, even when being propagated. Keep them in soil no matter what to ensure the roots don’t dry out or become waterlogged and begin rotting.

There’s no need to place the Calathea you are dividing into water to protect it from shock while performing the division.

How to Propagate a Calathea Plant:

Division may be the only propagation method available for this genus of houseplants, but it’s a relatively easy technique to learn. There’s no need for making special cuts or building humidity chambers to control the conditions around the new plant.

With a little care and a sharp hand trowel, you should have two Calathea plants where you had only one.

Let the newly divided Calathea plants stay in a warm, humid environment for the first few weeks as they recover from the shock.

Keep light levels low but consistent. The plants may initially show signs of shock, such as wilting or drooping, and browning of the leaves. Avoid overwatering at that point in response. This would be similar to re-potting a calathea plant.

Let the plants slowly recover and keep conditions correct, and you’ll eventually see them perk up. Color loss may be permanent on stressed leaves, but new foliage will soon replace them.

In addition, keep an eye out for any common calathea plant pests, bugs, and diseases.

Even with proper handling, a Calathea division is likely to stay stunted and shocked for a few months after this process. That doesn’t mean it’s not going to grow. After three to four months, the plant may suddenly surprise you with a growth spurt.

The plant will begin growing in earnest again with new foliage at whatever point the roots are established enough. Divided plants generally resume normal Calathea growth rates within six months and can reach the size of the original plant within two to three years after that.

Dividing a larger plant from the start will shorten the time it takes for the divisions to reach full size.

Can you propagate calathea plants in water?

Calathea can’t handle water propagation for multiple reasons. First, it’s not truly propagated but rather only divided. That means it needs the same soil as always for the new plants. Second, placing Calathea’s roots in pure water smothers them and increases the likelihood of root rot.

How long does it take a calathea plant to root?

Calathea can be slow to root after division. If kept moist but not too wet, they usually begin growing new roots within one week to one month after division. You may not notice growth on the top side of the plant for three months as it focuses on root growth below the surface.

Are calathea plants hard to propagate?

Thanks to the division process, they’re technically one of the easiest plants to propagate. Just breaking apart the root ball and giving it a new container is all you need to get a second Calathea plant from your first.

Can you grow a calathea plant from a broken leaf?

No matter how you take care of it or try to encourage it with rooting hormones, a Calathea leaf or stem simply can’t grow roots. It lacks the kind of tissue needed to help it grow into a full and healthy plant just from a leaf, much like a succulent can. Only part of a root ball with stems and leaves attached will grow into a new plant.

Can a calathea plant grow from one leaf?

A cutting or division made with a single stem and leaf attached to the roots is at great risk of dying. The leaf is the only food source for the plant as it works on growing roots, and it’ll need more energy than a single leaf can provide. Try to ensure each division still has at least three to four healthy stems and leaves after dividing.

Why is my calathea plant not rooting?

Don’t pull up a division to check its rooting because this will kill the new roots. If you have divisions dying and never rooting, change the soil mix and don’t let the new plants dry out.

Calathea plants are fun to propagate because you either get new plants for free or gifts to give to friends. Try giving your mature Calatheas a division to see how they respond with new growth. 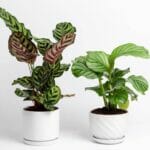 How Big and How Fast Do Calathea Plants Grow Indoors? 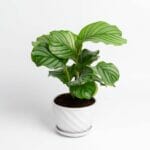 When and How to Repot a Calathea Plant (Essential Tips)