How to Cut Back and Deadhead Cosmos Flowers

Everything You Need to Know About Cutting Back and Deadheading Cosmos

Few summer flowers are as easy to grow or have as much impact as cosmos. With its gorgeous fronds and wonderfully colorful and symbolic flowers, the sun-loving cosmos flower looks great in borders or containers. You can maximize the impact of your cosmos by cutting them back at various stages during the season. This article will explain everything you need to know about when and how to cut back and deadhead cosmos flowers in your garden each season.

Cutting Back and Deadheading Cosmos Flowers – The Essentials

For optimal blooming, pinch young cosmos once they’re about 8 inches high to boost flower production. Once the first round of blooms finishes, cut back the cosmos to 12 to 18 inches to stimulate another round of flowers. Deadhead spent flowers throughout the season. Cut back chocolate cosmos when the first frost hits.

The Cosmos genus encompasses approximately 35 recognized species belonging to the aster or daisy family (Asteraceae). The genus gets its name from the Greek word “kosmos”, which translates as “beauty” or “harmony”.

The majority of cosmos species and cultivars are herbaceous annuals. Most species are derived from garden cosmos (Cosmos bipinnatum) and yellow cosmos (Cosmos sulphureus). However, chocolate cosmos (Cosmos atrosanguineus) is a tuberous perennial.

Cosmos grow in bushy clumps reaching up to 5 feet high and up to 3 feet wide. Single, double, or semi-double daisy-like flowers are produced in clusters branching off from the main stems. Cosmos flowers come in beautiful shades of pink, purple, yellow, orange, red, and white, and they’re also drought-tolerant.

Cosmos perform well as a cut flower crop, with stems able to last approximately 7 to 10 days in a vase. Cosmos also provide nectar for pollinators such as bees and butterflies.

Do Cosmos Flowers Need Cutting Back and Deadheading?

For annual varieties of cosmos, cutting back isn’t strictly necessary. Cosmos flowers can be very productive with little to no maintenance. However, cutting back, deadheading, and harvesting cosmos regularly can encourage more flower production.

As annuals, most cosmos only last for a single year before dying back. This means annual cosmos flowers don’t need to be cut back to protect them during winter. They will naturally die off once the first frost arrives in the fall.

Deadheading is the most essential part of cutting back cosmos. Although cosmos flowers look great for several weeks, they will eventually start to wilt. Removing these spent blooms revitalizes the plant and encourages the development of more flowers.

Cutting back is essential for chocolate cosmos, which differs from other cosmos varieties because it’s a perennial rather than an annual. Once flowering has finished, and the first frost has arrived, chocolate cosmos should be completely cut back to the ground. The tuber can then be lifted and stored over winter, similar to a dahlia.

Whenever you cut back or deadhead cosmos flowers, it’s essential to take precautions to keep the plant healthy. If pruning isn’t done correctly, it can damage the plant and leave it more vulnerable to pests and diseases.

Always use clean, sharp tools such as pruning shears. Sterilizing your tools helps prevent the spread of disease between plants. Use a 5% bleach solution to keep your cutting tools sterile.

Make sure that your shears are sharp before you prune your cosmos. Sharp tools make cleaner cuts, which minimizes the risk of infection from diseases and pests. Blunt tools do not cut cleanly, causing unnecessary damage to your cosmos.

It’s also important not to get carried away when cutting back your cosmos. Removing too much of the plant during the flowering season will weaken your cosmos. Take care not to cut back more than a third of the plant, and always leave approximately 12 inches of growth.

When to Cut Back Cosmos Flowers

Cosmos flowers can be cut back or pruned at various stages to promote more flowering. Young cosmos plants can be “pinched” once they reach about 8 inches tall. Pinching involves removing the main bud to promote bushier growth. This helps the cosmos produce more stems, which means more flowers.

Cosmos flowers can be cut back after the first round of flowering finishes. By reducing the cosmos to between 12 and 18 inches, the plant should produce vigorous new growth. This enables it to enjoy a second prolific flowering before the fall.

Chocolate cosmos flowers need cutting back entirely during the fall to help the plant prepare for winter. Once flowering has finished, and the first frost has hit, cut back all of the stems and foliage to the ground. Then remove the tuber from the soil and store it somewhere safe until the following spring.

When to Deadhead Cosmos Flowers

Cosmos flowers should be deadheaded regularly throughout the flowering season. This stimulates the cosmos to redirect its energy into emerging buds, helping to produce more flowers. The cosmos flowering season runs from early summer until the first frost arrives in the fall.

How to Prune Cosmos Flowers

Cosmos flowers can be pruned in several different ways throughout the season. These include pinching, deadheading, cutting back, and harvesting. Whenever you’re cutting cosmos flowers, use clean, sharp tools and handle the plant with care.

Remove the central bud on each main stem using your fingers or some clean, sharp secateurs. Cut just above a pair of leaves or branches, removing about 3 inches from the main stem. This encourages the cosmos to produce two new stems, doubling your flower output.

If you want even more flowers, pinch out the side shoots once they’re about 8 inches long and have a few pairs of leaves.

Deadhead any spent or wilting cosmos flowers throughout the season. Not only does this keep your cosmos looking beautiful and neat, but it also encourages more flowers. Removing old, dying flower heads allows the cosmos to concentrate its energy on unopened flower buds.

As always, use clean, sharp tools whenever you deadhead your cosmos. Cut the wilting flower head back to the next unopened or emerging flower bud.

Annual cosmos can be cut back once the first round of flowers has finished. By cutting them back at this time, you’ll revitalize the plant. This helps your cosmos produce new growth and a second flush of flowers before the end of the season.

Using a clean, sharp tool, cut the cosmos back to 12 and 18 inches high. Don’t remove more than a third of the plant in one go. Within a month, your cosmos should produce new flowers.

Cut back your chocolate cosmos once flowering has finished and the first frost has arrived. Cut all of the stems and leaves right back to the ground. Dig up the rest of the plant and remove the soil. Allow the tubers to dry for a few days before storing them for the winter.

Although cosmos are low-maintenance plants, cutting them back at the right time can result in more flowers. Pinch out young cosmos when they’re about 8 inches tall to encourage branching. Once flowers emerge, deadhead spent blooms regularly throughout the season. Chocolate cosmos should be cut back completely after flowering has finished. 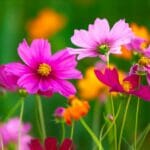 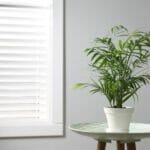